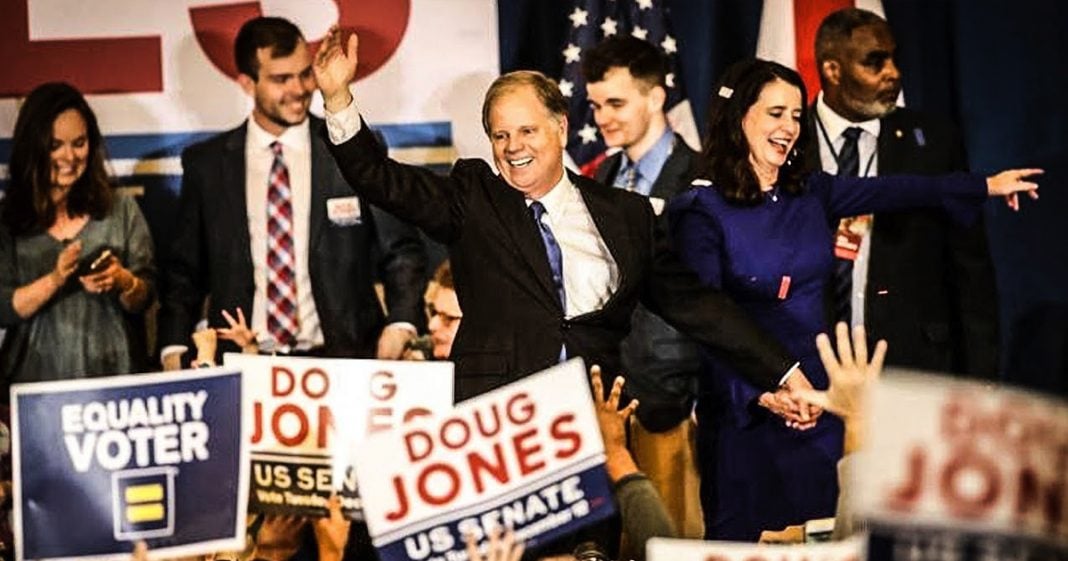 The crowd at newly-elected Senator Doug Jones’ victory speech was absolutely bonkers when the race was called for Jones, and the people there had every right to be ecstatic – Jones is the first Democrat to be elected to the Senate from Alabama since 1990, and his election was a sound rejection of Trump, Roy Moore, Steve Bannon, and the crew of Republican losers. Ring of Fire’s Farron Cousins discusses this.

If you were watching the returns come in on Tuesday night for the Alabama Special Senate Election, they kept showing the Doug Jones headquarters and the Roy Moore headquarters. Things at Roy Moore’s headquarters obviously pretty quiet throughout most of the night, especially towards the end, as the final results were trickling in. Over at the Doug Jones side, people were going absolutely nuts over the fact that Doug Jones, first of all, was about to win, and then did win the Special Election.

Just take a look at how excited everybody in that room got, when those last returns came in.

Alex Marquardt: Wolf, it is absolutely deafening in here. This news just coming across the screen there, from the horses’ mouth… I can barely hear myself… absolute jubilation. This is coming in a lot sooner than people thought. I’d been told by senior campaign sources, that they were expecting this to go on all night. They thought it was going to be extremely close, and that it would come down to a coin flip. And now, here in this ballroom, at the Birmingham Sheraton, you’ve got people pouring in.

The people in that room have absolutely every right to be that ecstatic, even more so. Doug Jones is the first Democrat to win a Senate seat from the State of Alabama, since the year 1990, 27 years since that state last elected their last Democrat to the United States Senate. Most of the credit … Let’s not forget this. Most of the credit for that victory goes to black women. They turned out in that state in record numbers on Tuesday, and they are the group that propelled Doug Jones into that Senate seat.

I hope … I hope Doug Jones remembers that. More importantly, I hope the rest of the Democratic Party understands that. You can shape your policies to make sure that you let that one group, that one group that is always on your side, let them know that you’re also on their side. That’s the challenge now.

Last night was the time for celebration, and possibly even through Wednesday, but beyond that, it’s time to get to work. It’s time to let these women know, and African-American men … They were out there in strong force, too. Doug Jones won every single block of white voters, men, women, college educated, non-college educated. It was the African-American vote, and specifically African-American women, that put Doug Jones in the Senate, and it’s time that we understand that, and we respect that, and we stop the economic warfare, basically, that we have launched as a country on that group of people.

We have to do better. They’ve done better for us, and now it’s time for Doug Jones to get into the Senate and make damn sure that everybody there understands why he’s there and who put him there, because it just as easily could’ve swung the other way. Had he not been running against an accused pedophile, I seriously doubt this election would’ve gone in Jones’s favor, but because of the constant attacks we’ve seen on the African-American community from the President, from these racist organizations that are popping up, feeling empowered now, these men and women came out on Tuesday, and they showed that they’re not going to back down. They’re going to come out in full force.

They made the difference. That is what we all need to learn from this. Yes, we need to be celebrating like the people in that room were, but not just for Doug Jones, for every African-American in the State of Alabama that came out and helped put him in office.