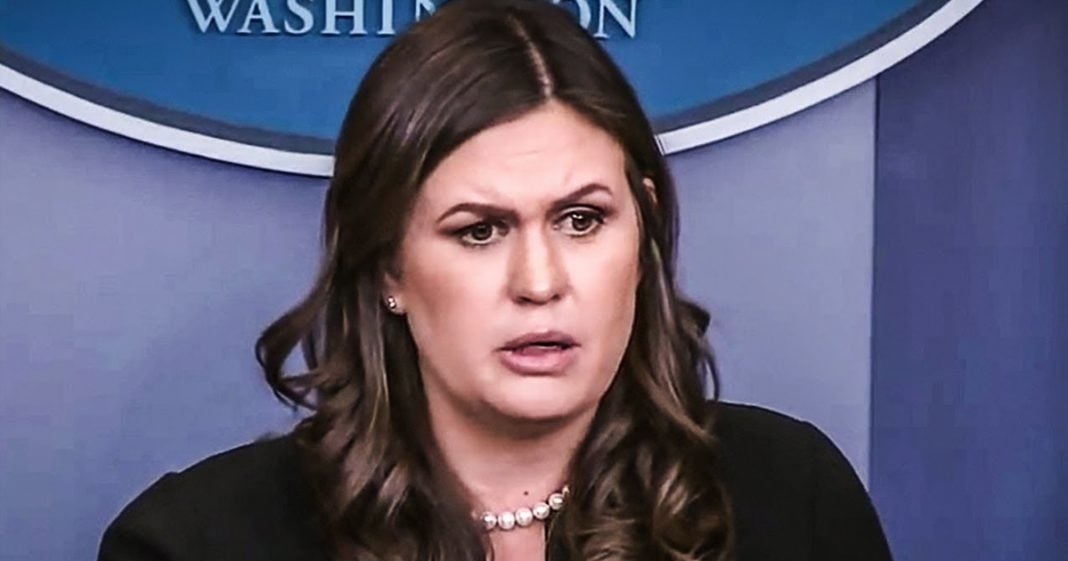 On Tuesday, Donald Trump Tweeted out an attack on Democratic Senator Kirsten Gillibrand that was immediately attacked as being sexist and sexually suggestive. But Sarah Huckabee Sanders was quick to run to the President’s defense, offering a lame excuse as to what the President actually meant. Ring of Fire’s Farron Cousins discusses this.

On Tuesday, Donald Trump tweeted out an attack on Democratic Senator Kirsten Gillibrand that could really only be taken as some kind of implication that she would offer sexual favors in exchange for campaign donations. Here is the exact tweet that Donald Trump sent out: “Lightweight Senator Kirsten Gillibrand, a total flunky for Chuck Schumer and someone who would come to my office ‘begging’ for campaign contributions not so long ago ‘and would do anything for them’ is now in the ring fighting against Trump. Very disloyal …” blah, blah, blah.

It’s that sentence, “And would do anything for them,” that he put in a special bracket there, that has led people to believe that Donald Trump is implying somehow that Senator Gillibrand would offer sexual favors in exchange for campaign donations. Once everybody jumped on this, obviously, later in the afternoon on Tuesday, White House Press Secretary Sarah Huckabee Sanders was asked what the hell Donald Trump was trying to imply there. This was her response.

April Ryan: Is Gillibrand owed an apology for the misunderstanding from the President’s tweet this morning, because many, including the Senator, thinks that it’s about sexual innuendos?

Sarah Huckabee Sanders: Only if your mind was in the gutter would you have read it that way. So, no. Hunter?

April Ryan: No, it’s not. What he said was open and it was not mind in the gutter.

Sarah Huckabee Sanders: He’s obviously talking about political partisan games that people often play and the broken system that he’s talked about repeatedly. This is isn’t new, this isn’t a new sentiment, this isn’t new terminology. He’s used it several times before. As I said a few minutes ago, he’s used it several times before, referencing men of both parties, in fact. I think that they’re, if you look back at the past comments he’s made, it was very clear what his reference was. Hunter?

You know what? Sarah Huckabee Sanders is one hundred percent right. If you look back at Donald Trump’s past statements that he’s made about women, it’s pretty clear that he absolutely was launching a sexist attack against Senator Gillibrand. Remember, this is the guy who was on tape bragging about the fact that he would go around and grab women by the pussies and forcibly kiss them, even if they didn’t want to, even if they were married. When you’re rich, he says, they let you get away with it. So, yeah, Sarah, when we look back at his past statements, it’s not that hard to figure out what Donald Trump was trying to imply here about Senator Gillibrand.

Later on during the press conference, Huckabee Sanders went forward to say Senator Gillibrand’s mind is just in the gutter. Really? Your President, your boss, is always in the gutter. That’s where his mind lives. It’s got its own apartment there. Everything this man says about women, towards women and, most likely, to women, is pretty much some kind of sexist attack. He cannot stand when any woman, whether it be Senator Warren, Senator Gillibrand, Nancy Pelosi, whoever it is, whenever they attack him, he immediately jumps out, far more so than he does when a man attacks him.

This is a man, a President of the United States, who has a very real problem with respecting women, because he only views women as objects because, throughout his entire life, that’s the only he’s treated them. Every woman that has entered Donald Trump’s life has been an object, a means to a certain end. There’s really only one way that we can take this tweet from Donald Trump, and I have no doubt in my mind that he absolutely was trying to imply some kind of sexual exchange that she had offered in exchange for campaign donations. That’s what he was trying to convince the American people of, and it backfired on him spectacularly.