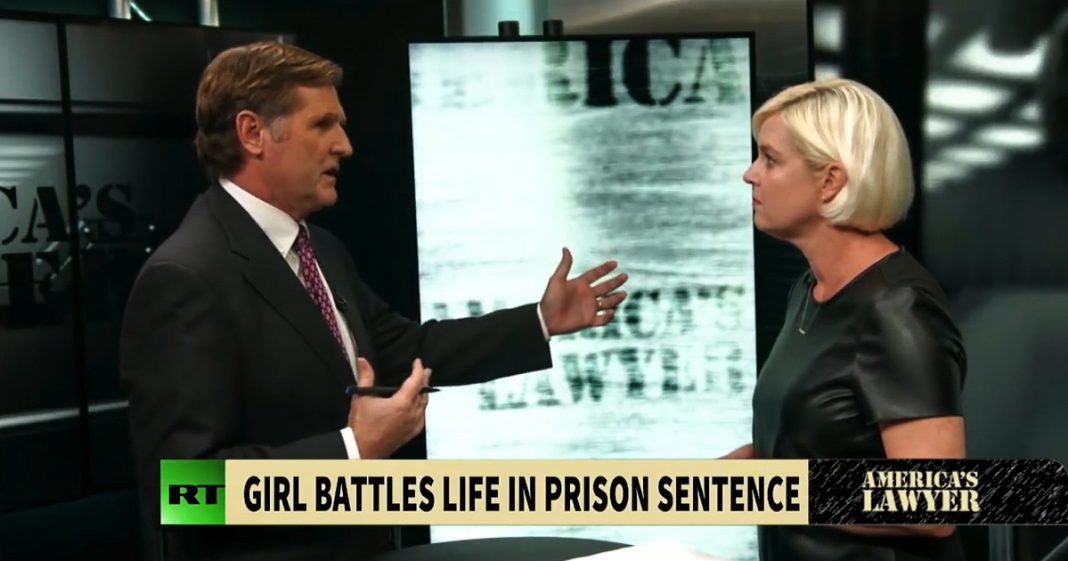 Via America’s Lawyer: Mike Papantonio is joined by Mollye Barrows, legal journalist for The Trial Lawyer Magazine, to talk about how the state of Tennessee sentenced an under-aged girl to life in prison.

Mike Papantonio: A Tennessee woman sold for sex as a minor, was tried as an adult after killing one of the men who bought her. She was 16 years old when the event happened, and testified in court that she had beaten, raped and threatened at gunpoint, that that was a regular occurrence in her life. Joining me now to talk about this is legal journalist for Trial Lawyer magazine, Mollye Barrows. Mollye, could any state law try a girl under these circumstances, as an adult?

Mollye Barrows: Apparently the state of Tennessee could and did, and she was sentenced to life in prison for murder and for aggravated robbery. The tragedy of this is that the jury didn’t even hear a lot of these details that are now coming out, the fact that she had been abused as a child, the fact that she had run away at the age of 16, the age she was when she murdered this John.

This abuser, this pimp boyfriend had basically told her this is all she would be good for, and she had thought that he was a boyfriend. Well what they’re describing is a classic case of how you condition a human trafficking victim, a sex trafficking victim. The jury never heard any of that. Basically prosecutors presented a case of a prostitute who killed a John for his wallet, and that’s all they heard.

Mike Papantonio: Well there’s some new defenses that maybe can arise here. One of them is the right to be able to defend yourself.

Mike Papantonio: The right, if you are under a really serious threat, you can defend yourself. Some of these trafficking laws provide some rights that maybe we didn’t have the first time around.

Mike Papantonio: Who was this guy that paid for her, and how is it that that wasn’t a major feature of this case? How do you lose a trial with these facts?

Mollye Barrows: I know. Well they didn’t present them, and that’s a good question for her defense attorney. I would like to know a little bit more about that, if she actually had a public defender or somebody who put in a little time, but she never did take the stand in her own defense. The jury never did hear any of those details.

The John if you will, was a 43-year-old Nashville realtor. His name was Johnny Allen. He picked up Brown in a parking lot, hired her for sex, they get back to his house, she says he starts acting strangely, she pulls a pistol out of her purse and shoots him in the head. She told the jury, or the defense presented the case that she did this in self-defense, but the prosecutors were saying, “Well, when she left, she took a couple of guns, she took his pants, which had his wallet in it,” so they felt like it was a cut and dried case.

But now that this has come to light, and it’s all come to light because of a 2011 documentary about this girl, and while here she is serving this life in prison sentence for this crime when they were all these extenuating circumstances.

Mollye Barrows: Right, and she did claim self-defense, but the jury just didn’t buy it.

Mike Papantonio: Well she wasn’t even put on the stand.

Mike Papantonio: A self-defense case is pretty tough without saying, “the victim’s got to take the stand and here’s what happened.” Where does this case stand now, and what are your calls on where this goes?

Mollye Barrows: I think this is going to continue to gain steam, especially in the light of what we’ve got going on now, with all these powerful figures that are coming down with accusations of sexual harassment, you’ve got new laws that have been passed. The supreme court also recently ruled that juveniles should not be sentenced to life in prison without parole. There are a number of factors that potentially change the outcome of this case, and provide for it to be reopened.

There is a petition right now to reopen this case. A number of celebrities have gotten behind the case of Cyntoia Brown. She’s now 29 years old. The interesting thing about the supreme court ruling, so advocates for sex trafficking victims are looking to that thinking that this may give them hope that this girl had been sentenced to life in prison as a juvenile, however, Tennessee law requires that it can be revisited, she actually is eligible for parole, but it won’t be until she’s 69.

Mike Papantonio: Wow. Okay, so here’s one thing you missed, fear for life.

Mike Papantonio: From the time she was initially sold, she was sold as a child.

Mike Papantonio: From the time she was sold, her life was about the same all the way up to this event. That all adds up to the self-defense issue doesn’t it?

Mike Papantonio: Exactly. Mollye, thank you for joining me.