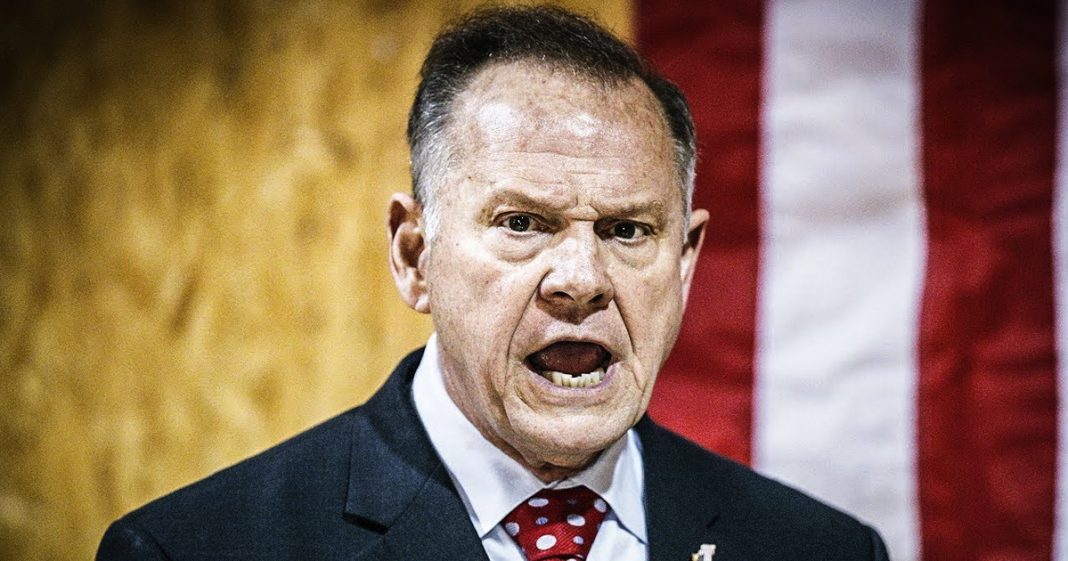 Today, voters in the state of Alabama get to decide whether an accused pedophile or a man who prosecuted members of hate groups will be representing them in the US Senate. The entire country will be watching the outcome of this election, and for good reason – the battle for the soul of the Republican Party is on the line today. Ring of Fire’s Farron Cousins discusses this.

Well, today is the day most of us have been waiting for. It is election day in the State of Alabama, where an accused pedophile, Roy Moore, is up against a guy that prosecuted members of the KKK, Doug Jones. In case you haven’t been following in the last few days, here are all of the developments that have taken place with Roy Moore.

First and foremost, he mentioned a few days ago that he would probably stop the Bill of Rights after amendment number 10. He doesn’t think we need any of the ones beyond that, which happen to include the amendments that got rid of slavery in the United States. He also said recently that the last time the United States was great was back when we had slavery in this country. Eight women, I believe, maybe a few more than that have come forward saying that he approached them when they were in their teens, he was in their 30s, for a sexual, romantic relationship. He got banned from a mall in the State of Alabama because he would show up and prey on young teenage girls.

And then last night, at his closing rally, his wife stood up at the podium and said, “We’re not racist. One of our attorneys is a Jew.” Those were her exact words. “One of our attorneys is a Jew.” Basically, they used the old, “I’m not racist, I have a black friend” excuse to try to show people that, “Hey, we welcome all people into this grand old party that we’re running here.” Doug Jones, again, is a guy who prosecuted members of the KKK for murdering children, murdering young girls, so today, the State of Alabama’s choosing between two guys, one who stood up for justice for young girls, and the other who wanted to date them.

Meanwhile, Donald Trump this morning on Twitter once again doubled down, telling people to vote for Roy Moore. “We need his vote. He’ll vote with us 100% of the time, and Doug Jones is just a democratic puppet.” I don’t think Donald Trump understands the definition of “puppet,” when he’s trying to say that, “Vote for this guy, because he’s going to vote with us 100% of the time.” That’s actually a puppet, but that’s neither here nor there.

Republicans, Alabamians, Americans have a choice today. Where do you want the Republican Party to go from here? Do you want it to be a party that embraces pedophilia, that embraces sexual predators, or do you want to be the kind of people that stand up and say, “This is not about tribalism. This transcends party lines. I can not in good conscience vote for a guy like Roy Moore”? That is the choice that they will make today, and whatever choice they make is going to have ripple effects throughout this country. If Roy Moore gets elected to the Senate, it’s going to send a message to every neanderthal, misogynist male in this country that this kind of behavior is okay. If Moore loses, those men will think twice before trying to run for public office again.