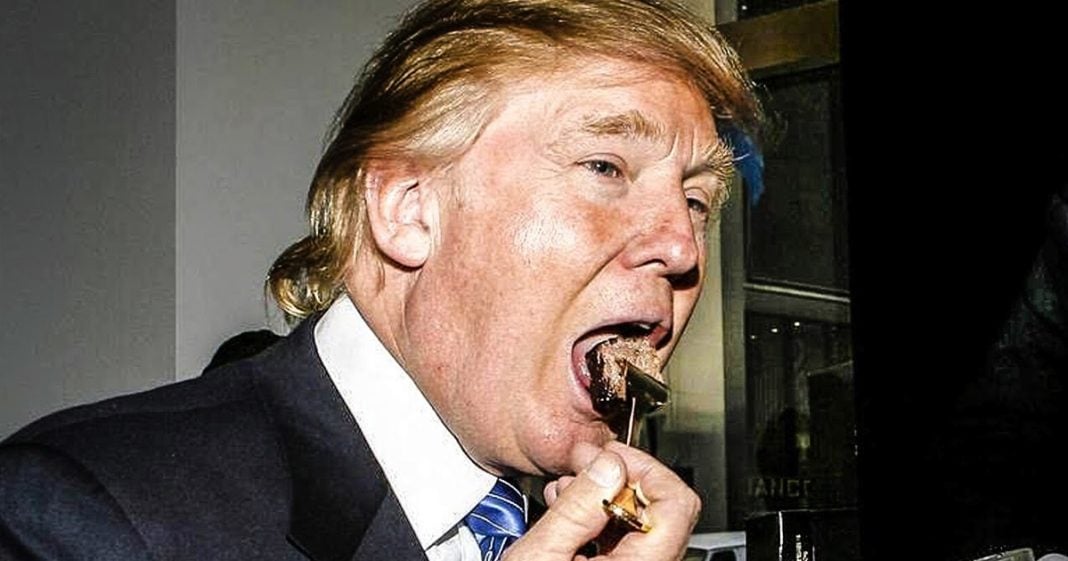 According to a new report in The New York Times, President Trump spends at least 4 to 8 hours a day watching cable news shows. Additionally, his typical lunch consists of two Big Macs, 2 Filet O’Fish sandwiches, and a chocolate milkshake. His physical and mental health is in serious jeopardy, as Ring of Fire’s Farron Cousins explains.

Recently during Donald Trump’s trip to Asia, he told us that he doesn’t spend a lot of time watching TV because of all the documents that he has to read. Well, according to a new report by the New York Times, Donald Trump does, in fact, watch quite a bit of TV, and those closest to him in the White House say that he spends at least four hours a day in front of a television. Sometimes as many as eight hours every single day watching cable news.

The report also says that Donald Trump has placed the remote control for the televisions in the White House on a perpetual state of dibs, meaning that if he is around, he is the only one who is allowed to change the channel or adjust the volume on the television. He also has what he refers to as a super Tivo, so that he can record all of the cable news shows that he misses and watch them later, and get angry, and Tweet about them to millions of people in this country.

Another thing that this particular report by the New York Times brought up was the fact that Donald Trump is binging every day on Big Macs, Filet-o-Fish sandwiches, and chocolate milkshakes. Now, according to the report, he’s eating two Big Macs, two Filet-o-Fish, and a chocolate milkshake each day at lunchtime, which would be well over, I think, about 2600 calories per day, every day, during lunch. That particular part of the story, I’m not entirely sure that I agree that that happens. Somebody may have fed them some false information on that because a diet like that for a guy like Trump at his age with his lifestyle … That’s going to kill you rather quickly, so I find it hard to believe that Donald Trump is, in fact, eating that much every day, although the report does say that, yes, obviously, he does have an affinity for fast food. Something we’ve all known since the campaign, and pretty much even before that.

The bottom line is this. Donald Trump is not getting any work done as President, and I don’t even know if that’s a bad thing. Considering the fact that he’s been golfing at least 80 days throughout his entire presidency so far, the fact that he’s spent one out of every three days at a Trump branded property, coupled with the fact that he spends four to eight hours per day watching television, that doesn’t leave a lot of time for those alleged documents that he claims to be reading all of the time.

But, again, the more time that he spends watching TV, the more times that he spends on the golf course or at his own properties, the less time that he has to go repeal regulations or help pass new legislation that’s going to screw over the majority of Americans. So, if Trump just wants to kick back every day in the White House, eating his Big Macs and watching Fox News, I am perfectly fine with that, as long as it prevents him from passing any new laws that are going to continue screwing over the middle class and the working class in the United States.