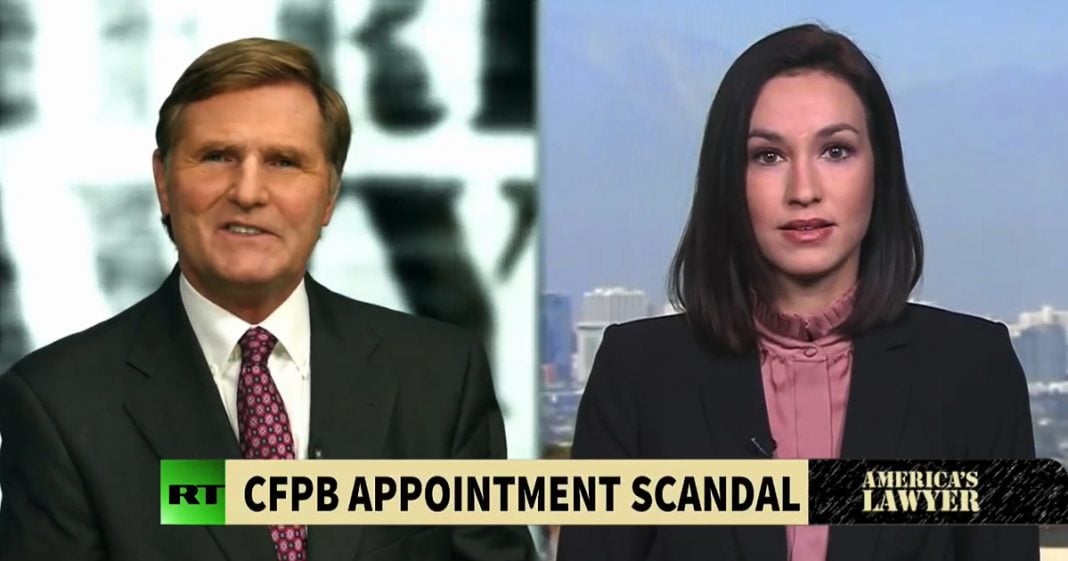 Via America’s Lawyer: Mike Papantonio talks with Brigida Santos about how the lawyer who wrote a memo supporting Trump’s appointment to the CFPB represented a predatory foreign financial company with a substantial history of sketchy debt-collection routines.

Mike Papantonio: The government agency known as the CFPB, created to protect you from predatory loans now has its new director, Mick Mulvaney, who was appointed by Trump. But in a twist of events, it turns out that the lawyer who wrote the memo supporting Mulvaney, supporting that appointment, represented a predatory foreign financial company with substantial history of very sketchy debt collection routines. Joining me to talk about that is RT American correspondent Brigida Santos. Brigida, who is the lawyer and what’s the story behind it? This is a guy, he went out of his way to convince Trump that Mulvaney was the pick and now we’re learning there’s a pretty sketchy background to this lawyer who was making that recommendation. What’s your take?

Brigida Santos: Mike, this lawyer is Steven Engel, who from 2015 up until about this August was a lead counsel for NDG Financial Corp, and this is the company that is being sued by the Consumer Financial Protection Bureau for allegedly scamming consumers out of money that they never owed for about 10 years. Now the reason this is a conflict of interest is because Engel wrote that letter supporting Mick Mulvaney as the new acting Director of the Consumer Financial Protection Bureau, because Mick Mulvaney has been very clear in his disdain for this financial bureau to protect consumers. He’s said that it’s a very sick, sad agency and that it’s the worst type of government agency. So of course, Steven Engel is going to support Mick Mulvaney, who could potentially go very easy on NDG Financial Corp.

There’s also another financial sort of conflict of interest here, and that’s that Mick Mulvaney is also the director of The Office of Management and Budget, which is a political job at the White House. Now critics argue that Mulvaney is supposed to remain independent of the White House if he’s going to be overseeing the Consumer Financial Protections Bureau, and that’s because this bureau was created after the 2008 financial crisis in order to protect consumers, and it’s supposed to be independent for that very reason. Now this bureau has collected over $12 billion for about 29 million consumers who have been wronged by these predatory financial institutions, Mike.

Mike Papantonio: Brigida, the truth is, conflict of interest is the least of the problem that this administration has had. The appointments they’ve made, whether it’s the FDC, the SEC, the CFPB, the EPA. They’re horrendous. It’s almost like saying, “Let’s go find somebody who stands for just the opposite of what that agency’s going to do, or should be doing, which is protecting the public. Let’s find that person who hates having the public really get a fair shake and let’s appoint them.” I mean, it’s been time after time. How could the federal judge who approved Mulvaney’s appointment argue that he’s fit to run the agency, especially considering Engel’s involvement in supporting it? And furthermore, why is this so quiet? Why are we not hearing anything about this from Washington? Moreover, how about the media that seems dead set on talking about one issue all the time, 24/7? They’ve got one issue in their head. They’re ignoring everything else. Why are we seeing so little about this?

Brigida Santos: The judge who cleared this says that the Federal Vacancies Reform Act does allow the President to appoint somebody to this position despite the Dodd Frank Act succession rules that would place the current Deputy Director, Leandra English, in this position rather than Mick Mulvaney. But unfortunately, a loophole was left in the Dodd Frank Act that would allow for this very thing to happen. The President’s choice can completely destroy the agency. Again, Mick Mulvaney has made it very clear that he wants to do that. This is a way to get deregulation without actually passing any deregulation reforms. And we don’t hear a lot about it because, again, a lot of media is controlled by Wall Street. These laws really put Wall Street’s interests over the interests of consumers and the public, Mike.

Mike Papantonio: Brigida, I’m curious to know about the case that the CFPB made against the payday lender Engel represented. What does the complaint allege the company did to the American consumer? Why was the case brought? How serious was it? How did we get into this huge, major conflict to begin with?

Brigida Santos: NDG originates and collects payday loans online in all 50 states. It is a foreign company from Canada. It also has other companies under its umbrella, which are named in this lawsuit, operating foreign as well in Malta. Any company that does loans inside of the US needs to comply with US federal law. But these companies have used their foreign status to go around these laws, in fact, saying that these laws do not apply to them, even though they do apply.

So now, the CFPB is suing NDG for its predatory practices, which are a violation of these Dodd Frank Act rules. According to these documents, NDG falsely threatened consumers with jail time, arrest, lawsuits, imprisonment, and even wage garnishment, something that it had no legal authority to carry out. And these people never actually owed these payments back to the company in the first place. They had no obligation to repay them, so that’s what this lawsuit is really all about, Mike.

Mike Papantonio: The incredible thing is, it’s almost as if this judge is saying, “Gee. I don’t have any wiggle room here. Trump made the appointment. I don’t have the right to look at this.” It’s almost like the media has brain dead again where it comes to one of these appointments. One of the accusations against this company in Canada and Malta is that they had no legal right to charge people in the US to collect payday loans, while at the same time using their foreign status to claim that they were exempt from various limitations and statutes. Where does this case stand now? It’s kind of a dichotomy. They’re talking out of both sides of their mouth and I’m curious about where we are now with it.

Brigida Santos: It appears as if the case is still moving forward. No judgment has been ruled yet. All I can tell you is that CFPB is trying to fight against these type of practices. They want to end it at the company. They’re seeking damages for the consumers who have been wronged here and they’re also seeking refunds for the people who have paid up this money that they were never supposed to pay in the first place, Mike.

Mike Papantonio: One thing we see for sure here is, this regulatory agency is dead now, and that’s what Trump intended to do, just like he intended to end the EPA and what the EPA could do. He couldn’t get legislation to do it, so he makes an appointment. The agency is dead. The SEC really is dead. The FDA, I can tell you, I can promise you. First hand, I see it every day. They are dead. The question comes down to: Who is watching the store? And unfortunately the answer is one that we all know, and that is, nobody. We thought it was bad the last eight years that we came through. It’s worse. It’s going to be even worse as we proceed through this Trump administration these next few years. There’s going to be no regulator entities that are looking over the rights of consumers. Brigida, thank you for joining me.