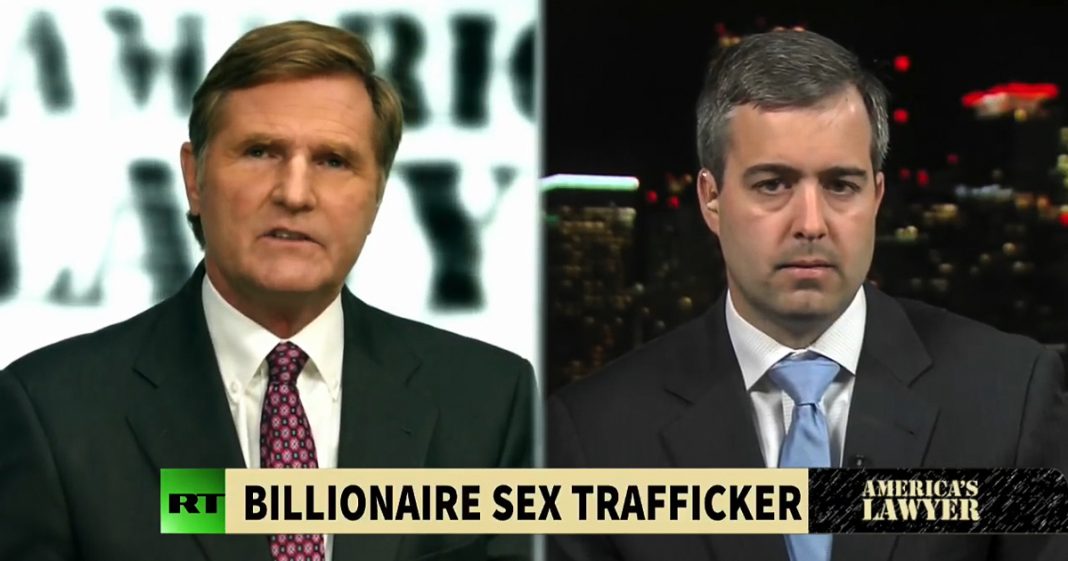 Via America’s Lawyer: Mike Papantonio and Attorney Jeff Gaddy talk about why a billionaire by the name of Jeffrey Epstein, who was found to be running a sex-trafficking operation, only served a few months in jail.

Mike Papantonio: The Crime Victims’ Rights Act lays out the rights of victims during court proceedings and plea bargains. They have the right to be reasonably heard at any public proceeding in the district court involving releases, pleas, sentencing or any parole proceedings. The plea deal arranged by prosecutors and approved by federal judge in sex trafficking and pedophilia case against Jeff Epstein violated all the provisions of that law. The prosecutors claim that they did their very best to keep the victims informed about what was happening with the plea deal, but that some of the victims were just too hard to get in touch with or that the victims weren’t cooperating enough with the prosecution. In the end, the prosecutor said that they were so desperate to get financial compensation for the 30 victims in the case that they were willing to let a man with a history of sex trafficking off the hook with what amounted to no punishment at all. There’s not one reason alone why Jeffrey Epstein was let off the hook. He was a powerful billionaire. That’s the real key reason but no other reasons besides that.

I’ve looked through the documents. I’ve seen his personal Rolodex, Bill Clinton, Donald Trump, Richard Branson, members of several different royal families throughout Europe. These connections are what helped keep Epstein out of prison for sexually victimizing and prostituting dozens of young teenage women. For nearly a decade, attorneys in South Florida have been trying to reverse the original plea deal on the grounds that it violated the Crime Victims’ Rights Act and their case is about as tight as you could hope for. The only problem is that those same powerful connections that kept Epstein from serving a real prison sentence are still in position of power. The best hope is that now this country is finally starting to pay attention to claims of sexual assault and they’re finally willing to overlook someone’s net worth and go forward with a genuine, a real prosecution.

Joining now to talk about this is former prosecutor, Jeff Gaddy. Jeff, start by giving us a quick rundown of what the Crime Victims’ Rights Act actually does for victims, if you would.

Mike Papantonio: So Jeff, this doesn’t really affect plea deals that prosecutors make. It simply lets the victim participate in that. Did I get that right?

Jeff Gaddy: You’re exactly right. Prosecutors are required by the law to allow those victims to have input into any offer that’s made for the criminal offender. You’re exactly right that the prosecutor retains the ultimate discretion, but the law recognizes that victims of crime have a voice. That voice cannot be silenced by the bank account, or the political connections of a criminal defendant.

Mike Papantonio: So that concept was completely bulldozed over with this billionaire Jeff Epstein. Tell us what happened in the Jeff Epstein plea deal. Where the female victims really kept in the loop and what was happening as the Crime Victims’ Rights Act requires, what really happened to that act, that’s so important, what happened in this case?

Jeff Gaddy: Mike, they were not kept in the loop. And worse than that, their record seems to imply that they were actively misled by federal prosecutors. Months after the prosecutors entered what has been called a sweetheart deal with Mr. Epstein, the prosecutors continued to send letters and other correspondence to these victims telling them the case was still under investigation. Telling these women that they were continuing to pursue these charges. In fact, the deal that they struck with Mr. Epstein was kept in the dark for over nine months. When they finally did let these victims know that Mr. Epstein would be entering a plea, they withheld a lot of the very, very pertinent details.

He was entering a plea in state court. They did not tell these women that this plea would bar any federal prosecution. They left out the details of his cushy jail sentence that he received in the matter. So by no stretch of the imagination did the prosecutors follow either the letter, or the spirit of the Crime Victims’ Rights Act.

Mike Papantonio: Well let me put this in perspective. Dozens of teenage women, some as young as 12 years old, were put into basically a prostitution ring by Epstein. That’s what he pleaded to. He said, “Yes I did these things.” Ordinarily, with the Crime Victims’ Rights Act, you’d have input from the parents maybe, from the victims themselves as to what the punishment should be. But here you had a billionaire who is connected to, his connections were incredible. I mean everyone from Bill Clinton to European royalty, and all of a sudden, this whole thing it takes place in secret. It takes place in almost the dead of night and the federal prosecutor’s said, “Oh gee whiz. We tried.” Well no, if you look at this record, they really didn’t plus you know the lawyers down in South Florida.

I know the lawyers down in South Florida, who are now trying to open this case. And I’ve seen the documents first hand. Seen them first hand and I’ve read them about how disgusting this child prostitution ring was. This is a guy that got 13 months, where all he had to do was show up at the jail. He could walk free 16 hours a day. It’s not like he was in jail 24/7. All he had to do was show up and sleep there, and he was free to go 16 hours a day. Anybody else Jeff, you were prosecutor. You prosecuted some of the most serious felonies in this state. Have you ever heard of such a situation. This guy should’ve been in prison for life. What’s your take?

Jeff Gaddy: No you’re exactly right. It’s truly despicable the way that the justice system treated these women in this case. He was facing offenses that carried up to life sentences when you looked at all the offenses together. He was given a slap on the wrist doesn’t even give it due justice as far as what he received in this case. Just as despicable as the sentence he received is the lack of transparency.

Mike Papantonio: Let’s go back. Let’s talk about that. Let me ask you. Let’s assume that this federal judge that’s been sitting on this an awful long time now says, “Gee whiz. You know what? This isn’t right. This is not in keeping with the Crime Victims’ Rights Act and I’m going to set this aside.” It’s not like double jeopardy attaches here, because in the plea agreement that I saw, this didn’t attach to any conduct outside of that narrow area down there in Palm Beach. In other words, if he did this in New York, he could be prosecuted. If he did this in Europe, he could be prosecuted. If he did it out west, so it’s not as if you even have to worry about a double jeopardy argument. What is your take on if this does go back to trial? All these people, these people are terrified. His friends, Harvey Weinstein’s name came up in this.

No surprise there, but his friends are terrified that this is going to be, that they’re going to get a second chance at this. What’s your take?

Jeff Gaddy: No you’re exactly right Mike. I mean the Victims’ Rights Act itself specifically allows for any plea or sentence to be reopened if the victim was denied their opportunity to consult with the prosecutor. That’s what happened here. I think it’s very important to note that this is not a case where these women who have filed this lawsuit are after money damages. In fact, they know they’re not entitled to that. They’re after justice. They want to see Mr. Epstein held accountable in a proper way for the crimes that he committed. They’re after justice, and frankly justice it seems to be long overdue.

Mike Papantonio: What I think is interesting about this case too, Jeff, is the lawyers that are handling it down in South Florida are superb lawyers. They’re some of the best lawyers in the state of Florida. They’re handling it pro bono. They’re not getting paid to do this. They’re handling this because they realized this is wrong. They see what the federal prosecutors were wrong. They’re upset at the idea of this double standard of justice, where this Jeff Epstein, who could be in prison for the rest of his life, is still free to fly back and forth to the island that he owns, where some of these girls were taken down in the US Virgin Islands. So there’s really been no justice here and these guys are very motivated by that.

I think the chances of this being set aside are very high. What is your take, if you’re calling, the facts of this case, what’s your call?

Jeff Gaddy: Look, I’m with you. I think that it’s very clear, that as I mentioned earlier, neither the letter nor the spirit of the law was followed. These women were ignored. They were treated poorly. They were not permitted to give their input into the ultimate sentence, and they should have that opportunity to voice their opinion. So I’m with you. I think that there’s a high likelihood of success here, and that Mr. Epstein may ultimately have to answer for his crimes.

Mike Papantonio: If he answers to what all these other characters are worried about, all these big name celebrities and from all over the world. What they’re worried about is they’re going to be pulled into it too, and they should be. I know we’re using the Epstein case as an example here, but there’s certainly been other high profile cases that could be used to show how the rich and powerful get away with virtually anything. It’s all part of the two, the double justice system that we have in the United States. As a prosecutor, you were confronted with the halves, always trying to determine what the rules should be. As a prosecutor, I know you saw that first hand. What was your push back when somebody came to you and they said, “Gee whiz. This is special because we have a lot of money.” I know you saw it. Give me your take on that and why we’re having such a hard time with that in the United States.

Jeff Gaddy: Look Mike, you’re right. Unfortunately it’s a sad but true state of affairs that many areas of this country, there’s a different set of rules that applies to the rich and powerful. One of the best and things that I love most about the law is the purity of it. The fact that it should apply equally to everyone and in the court rooms I was in, it most certainly did. But all too often, we do see the rich and powerful get to play by another set of rules, and that’s truly unfortunate.