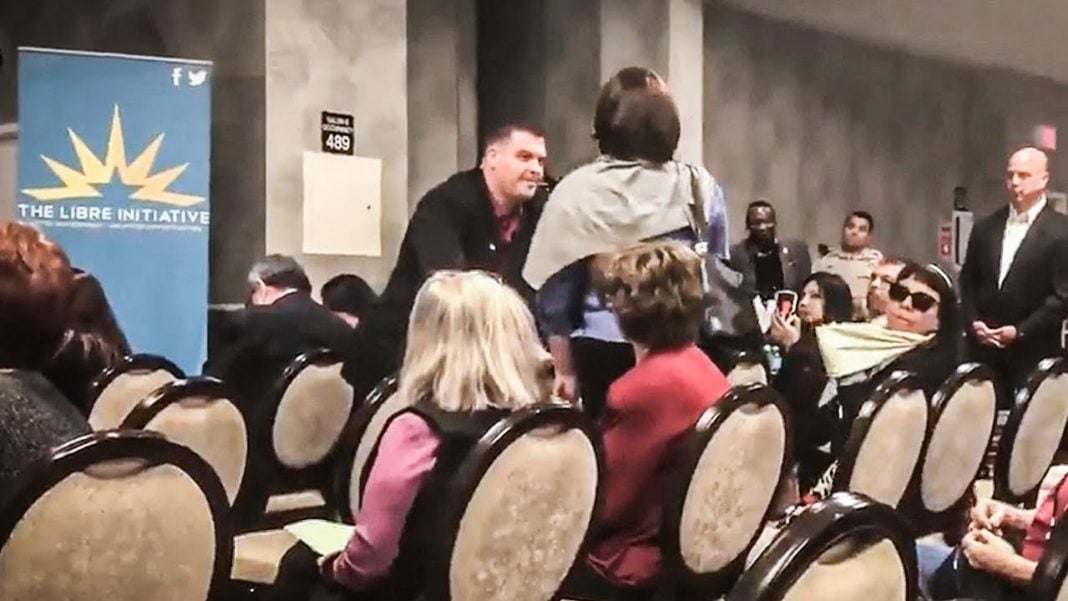 A woman with stage 4 Hodgkin’s lymphoma was removed from a town hall event with Republican Senator Dean Heller after she asked a question about healthcare. The Republican Party is willing to let people in this country die in order to give the wealthy a tax cut, but they don’t want to see the reality of their decisions when it confronts them. Ring of Fire’s Farron Cousins discusses this.

Last Saturday, at a town hall event put on by the LIBRE Initiative in Las Vegas, Nevada, Republican Senator, Dean Heller, was essentially doing a town hall there, taking questions from members of the audience. One of the women who asked a question, which the questions were written down and handed to Heller, happened to ask about health care and why he was trying to destroy health care with the Republican tax plan. The woman then stood up after he read her question and mentioned the fact that she has stage four Hodgkin’s Lymphoma. Basically telling him she doesn’t have a lot of time left on this planet. Her cancer is killing her, and the Affordable Care Act, through which she got insurance, is the only thing that’s kept her alive as long as she has been.

Instead of directly answering the question, instead of telling her why he’s essentially giving her a faster death sentence, the woman was removed from the auditorium. Immediately after she finished asking her question, security went up to her and escorted her out of the building. Heller did not obviously direct them to do this, because he was on stage and had to maintain his composure, but there is no doubt that there was discussion beforehand about what to do in case this situation arose.

See, Republicans like Dean Heller, who voted for this disastrous tax bill that’s going to strip millions of their health care. They want to do this without having to look at the consequences. They don’t want to be confronted by a person with cancer. They don’t want to talk to somebody with asthma or diabetes who will no longer be able to afford their life saving medications. They want to do all of this from the comfort of Washington, D.C., where we can’t see them. We can’t touch them. We can’t get in their face and ask them, “Why do you want me to die so you can give a tax cut to the wealthy?” They just want to do it, and then go back to their cushy mansions, their six figure a year salary for doing nothing but giving the wealthy what they want and screwing over the poor.

They don’t want to see the faces of people with cancer. They don’t want to see what their actions do to people in this country. I applaud this woman who stood up and said this, because that’s what needs to happen. It happened when the Republicans were first trying to repeal or replace the Affordable Care Act, and it has to happen again. People have to get in their faces.

Not violently, not confrontationally, but you need to say, “Look at me. I’m alive because of the Affordable Care Act. You’re taking it away from me. You’re telling me that my life is not worth the tax cut that you want to give your billionaire buddies. Why? Why do you think that?” That’s all you have to do. Confront them with the truth. Confront them with the faces of the people that they are condemning to death, because they want to give their donors a few extra dollars a year. That’s how we fight back.