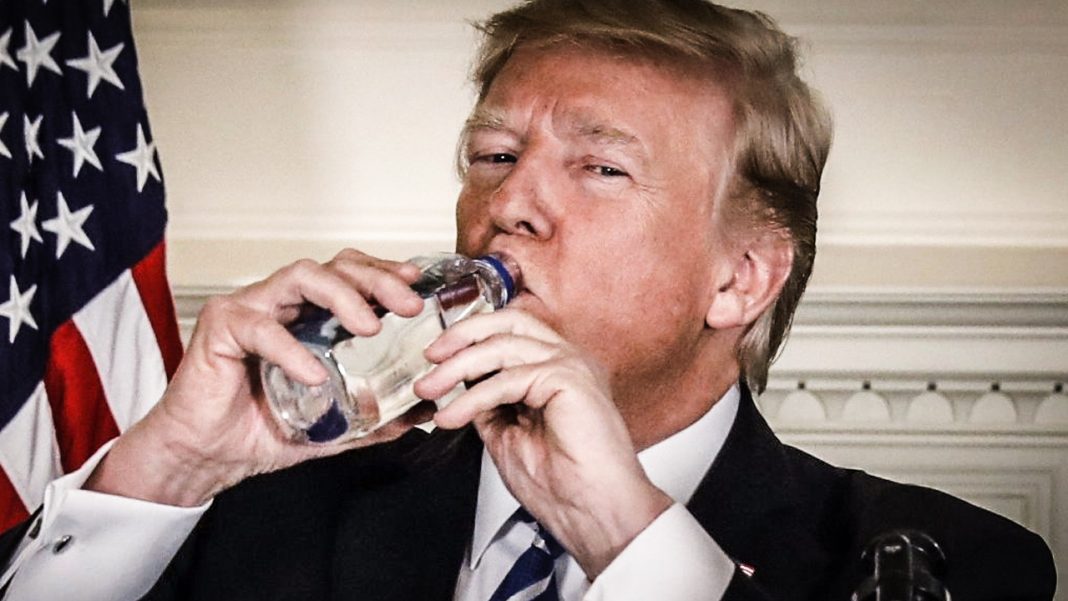 Following the backlash from “Denturegate” that took place earlier in the week, White House officials are now having to go on the offensive, claiming that Donald Trump is in absolutely perfect health. They’ve gone as far as to say that he’ll go get a physical in the coming weeks just to prove that he’s perfectly fine. Will this physical include brain scans? Ring of Fire’s Farron Cousins discusses this.

Just when you thought that the media attention to Denture-gate had blown over, it turns out that the White House is actually making things so much worse for the President. In case you’re not familiar with it, earlier this week Donald Trump gave a speech where it sounded like his dentures were coming a little loose in his mouth, so he was slurring his words and it sounded like he was speaking with something actually physically in his mouth. Dentists have come forward and said, “Yeah, that’s a clear sign that his dentures or perhaps a bridge was coming loose. That’s what explains that.” Well, the White House has been so quick to say that everything is perfectly fine with Donald Trump. He just had a dry throat, that now after everybody saw the video clip and laughed about it, they came out and said, “You know what? Donald Trump is is perfect health. Everything is great with him, and he’s even eventually going to get a physical to prove it.”

Again, as I pointed out earlier this week, rather than just coming out and saying, “You know what happened? His dentures kind of came loose a little bit. It happens,” they tried to play it off like everything was fine. They wouldn’t admit the truth. Now, they’re having to come out and say that, “No, he’s perfectly healthy. He’s perfectly fine. He’s going to go get a physical and we’re going to show you just healthy he is.” Again, they could have nipped this. They could have stopped it had they just been honest with the American public, but they’re so intent on lying just to protect Donald Trump’s fragile ego, that they can’t even admit that the man may or may not have some false teeth knocking around in his head. Instead, they have to come out and say that Donald Trump’s going to undergo a complete physical just to prove everybody wrong.

In my personal opinion, I hope that that physical includes some kind of brain scan or maybe some kind of psychiatric evaluation because that’s where we’re going to find the real problems with Donald Trump. I know in the past other people, analysts, pundits, have raised questions about Donald Trump’s physical health, but it’s his mental health that really concerns a lot of American citizens. That’s the part that scares us because whatever happens with his physical health, we know he doesn’t take of himself. He doesn’t exercise. He loves fast food. Hey, that’s true for most people in this country. That doesn’t necessarily affect his decision-making abilities or whether or not he’s going to fly off in an unhinged tirade and launch a nuclear weapon. It’s the psychiatric part that we need to be concerned with, not the physical part, and certainly not whether or not the man has false teeth. This entire thing could have been avoided had the White House just been honest with the public to begin with.