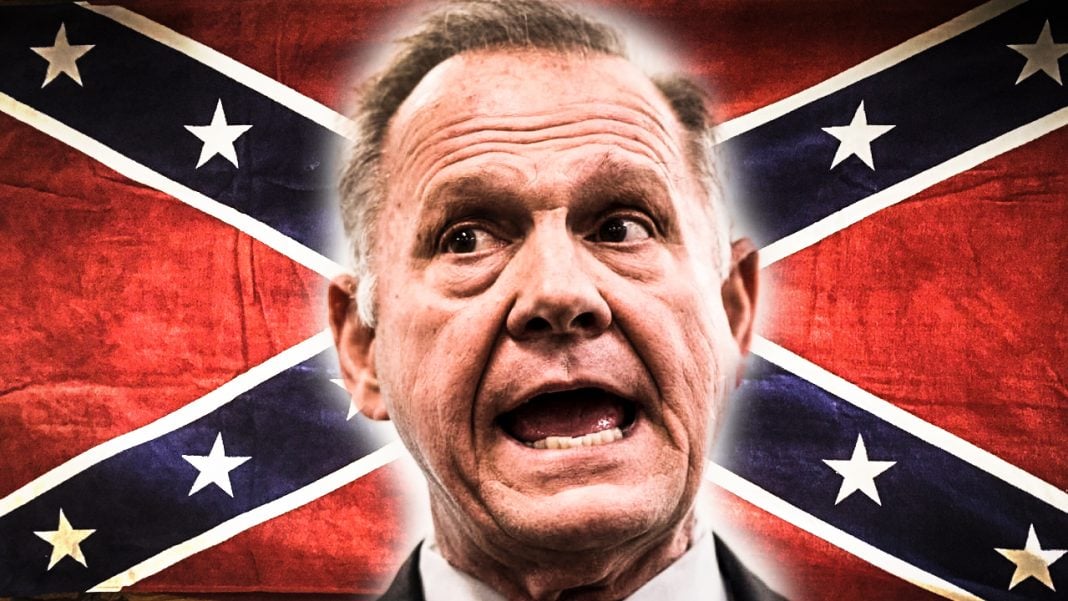 Roy Moore says that he wants to bring “Alabama values” to Washington, D.C. He also says that the last time America was actually “great” was during the time of slavery in the U.S. Are these the values he wants to bring to DC? Is this what Republicans of today stand for? Ring of Fire’s Farron Cousins discusses this.

Roy Moore, the Republican Senate candidate from the state of Alabama, who’s best know from being banned from malls and preying on teenage women when he was in his 30s, has recently, well it’s recently been revealed that he can pinpoint the time at which America was last great, building off of the Make America Great Again slogan put forward by Donald Trump.

I have long said that the Republican party in this country is trying to take us back in time. But typically I thought that time period was the 40s or the 50s, because they wanted segregation. But as it turns out Roy Moore wants to take us another 100 years back from there. He wants to go back to the early 1800s because according to him, that was the last time this country was ever truly great.

Now, he recently said this past week that he thinks the elite in DC are scared, because he wants to bring Alabama values to Washington, D.C. So what values are those? The values of 30 year old men preying on 14 year old women at a mall? The values of a backwoods hick that thinks the last time the country was great was when we could own black people? Please elaborate on that a little bit more, Roy Moore. After all you’ve only got like four days until the election in the state and I think the people of the great state of Alabama deserve to know the truth. They need to know what you believe and what you stand for?

Is it okay for a man in his mid 30s to have sex with a 14 year old? Is it okay for a man who served on the Supreme Court before he was removed to say that this country’s only great if we have slavery? I think everybody in this country, and not just the people in Alabama deserve to know that, and furthermore, I think that everybody in this country that calls themself a Republican, needs to look at Roy Moore and understand that he is the future of your party, if he wins this election.

His electoral victory, if it happens, will send a message across the country that not only is this kind of behavior okay, but acceptable to the modern day Republicans.