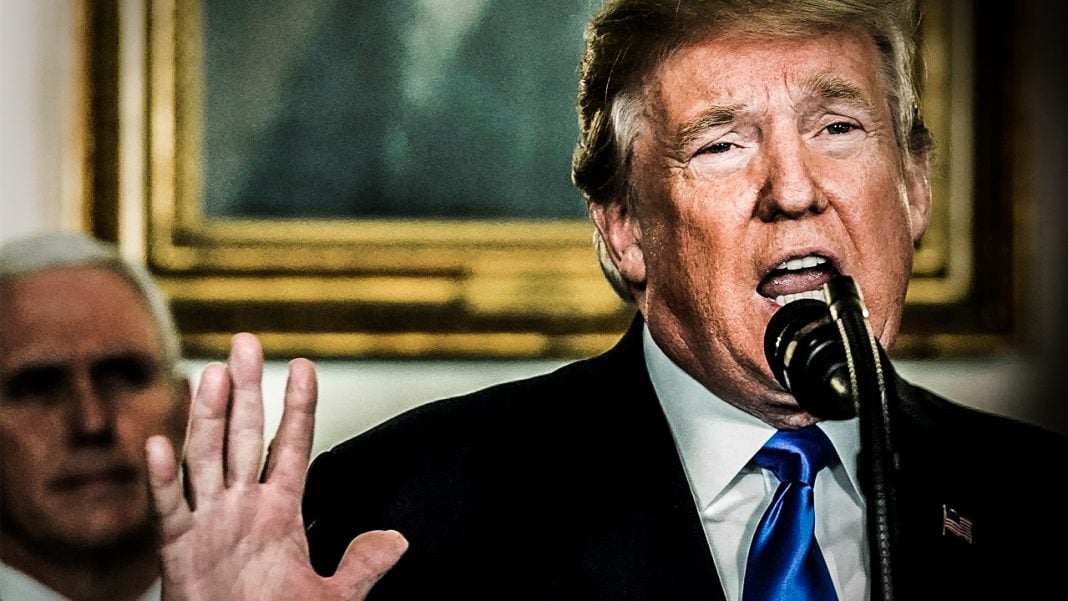 On Wednesday, Donald Trump gave a speech that sounded more like an actor pretending to be an alcoholic than a coherent statement by the President of the United States, prompting many to question the state of Trump’s mental health once again. The White House claims that Trump had a dry throat, but nothing about that speech resembles the symptoms of dry throat. Ring of Fire’s Farron Cousins discusses this.

Donald Trump gave a speech, Wednesday, where he talked about the whole issue of moving the capital of Jerusalem, or excuse me, Israel to Jerusalem. During the speech, it was difficult to make out what exactly he was saying, because he was slurring his words so badly. Take a look at the speech that Donald Trump gave.

There are two possible explanations for this. One of them a hell of a lot more plausible than the other, and that is Donald Trump’s dentures were coming out during that speech. That is what several dentists have come out and said, “Yes. I’ve seen this. I’ve heard it. I understand it, because I deal with it every day. His teeth were coming loose and that’s why he was talking like that.” If you listen again to the clip, he sounds like he’s got something in his mouth that is obstructing his ability to speak properly. That’s, obviously, the most obvious and plausible explanation.

The second possible explanation is that he was having a stroke. Something is seriously wrong with this man’s mental capabilities. According to him, he doesn’t drink or do drugs of any kind and never has, so we can rule out any kind of substance abuse. It either has to be his dentures were falling out or there’s something wrong with his brain. I only say that because this is a man in a White House trying to protect his vanity, that they won’t admit that, you know what? Yeah, maybe he’s got a bridge. Maybe he had a few teeth missing because he’s old and that happens. Nothing wrong with it, but they started to come out and that messed up his speech a little bit. No, no, no. He’s so vain that they won’t even admit to that. They have to come out with these BS excuses like, “Oh no, no, no. His throat was dry,” as if that actually happens when you have a dry throat. If they would just come out and admit it that, “Yeah. You know what? Maybe he’s got dentures. Something was happening in there.”

No. They won’t because they want to protect his vanity, so that leads to wild speculation, like maybe he was having a mini stroke. Maybe he is showing further signs of mental decline, because he can’t keep his words together. If the White House would just, for once, on one freaking issue be honest with the American public, we could move on from this. This is a non-issue, believe it or not. Unless, of course, it is pointing to Donald Trump’s continued mental instability and decline, in which case, we have to take this seriously. I beg the White House right now, just admit what actually happened yesterday. Donald Trump’s dentures came loose. That way, all of us can stop the speculation and move on to stories that actually matter.