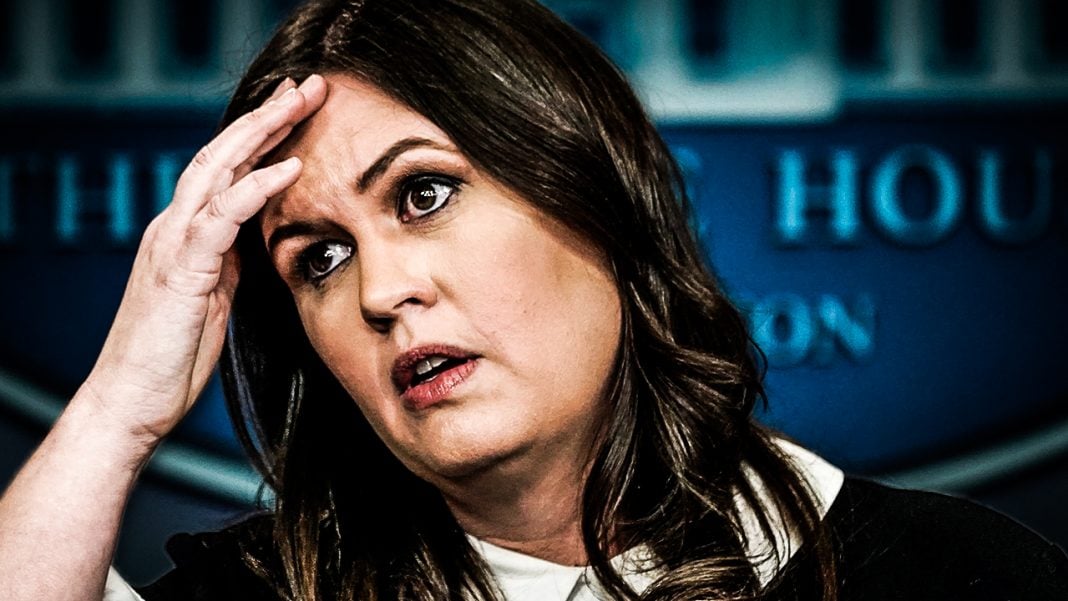 During Wednesday’s White House press briefing, Sarah Huckabee Sanders admitted that Donald Trump would support a business hanging a sign in their window that says that they do not serve gay people. This is segregation, plain and simple, and that’s exactly what Republicans want to bring back in the United States. Ring of Fire’s Farron Cousins discusses this.

Reporter: The Solicitor General’s office said at the court today that a baker could put a sign in his window saying, “We don’t bake cakes for gay weddings,” and that that would be legal.

Sarah Huckabee Sanders: I’m sorry, could you say the first part of that question again? My cough kind of drowned you out.

Reporter: Yeah. The Solicitor General, the lawyer from the Solicitor General’s office for the administration said today in court, in the Supreme Court, that it would be legal, it would be possible for a baker to put a sign in his window saying quote: “We don’t bake cakes for gay weddings.” Does the President agree that that would be okay?

Sarah Huckabee Sanders: The President certainly supports religious liberty. That’s something that he talked about during the campaign and since upheld since taking office.

Reporter: That would be …

Sarah Huckabee Sanders: I believe that would include that.

Reporter: Okay, and what-

Right there, Sarah Huckabee Sanders is telling us that Donald Trump, that the current White House, the current administration, absolutely supports segregation. That is what that means. If a business is allowed to hang up a sign that says, “We will not serve gay people,” that’s segregation.

I don’t know if Sarah Huckabee Sanders or Donald Trump ever took a history class. Well, hell, I mean, Donald Trump probably lived through part of it. But back when there were signs in businesses that say, “We don’t serve coloreds at our lunch counters. No coloreds allowed. No blacks allowed.” They’re literally advocating the same thing today, but for gay people. And that’s just the beginning.

It always starts with one group being persecuted. Then it’s going to expand. We’ve already seen what this administration wants to do to Muslims. They want to ban them from even being able to come into our country. Now, they want to say that if you’re a business owner, you can segregate, you can discriminate against any particular group that you want.

Keep in mind, this is not just about gay people. This is not just about one particular group that these hardcore Republican phony religious-types want to ban from their shops. It will expand. If the Supreme Court rules in favor of the baker in this case, it will set the precedent to allow them to discriminate against anyone that they want based on whatever obscure, skewed religious version they happen to subscribe to.

This is disgusting behavior by the Trump administration. This is absolutely, as Hillary Clinton had said, deplorable. This is the kind of crap that she was talking about. Donald Trump promised during the campaign once again, that he was going to be so great to the gays in this country. That’s what he said. They love him. Yet here he is openly saying through his press secretary that he is okay with businesses hanging up signs that say, “We don’t serve gay people.” Sarah Huckabee Sanders just admitted that.

They want to take the United States back to the ’40s and the ’50s, where it was perfectly fine for businesses to say, “No. We only serve white Christians here.” That’s where they’re taking us. Rather than moving forward as a country, we’re now moving backwards. And we’re moving backwards at light speed at this point. Sarah Huckabee Sanders is more than happy to get up there at that podium every day and advocate for this continued trip into the past where certain people in this country no longer have any rights.