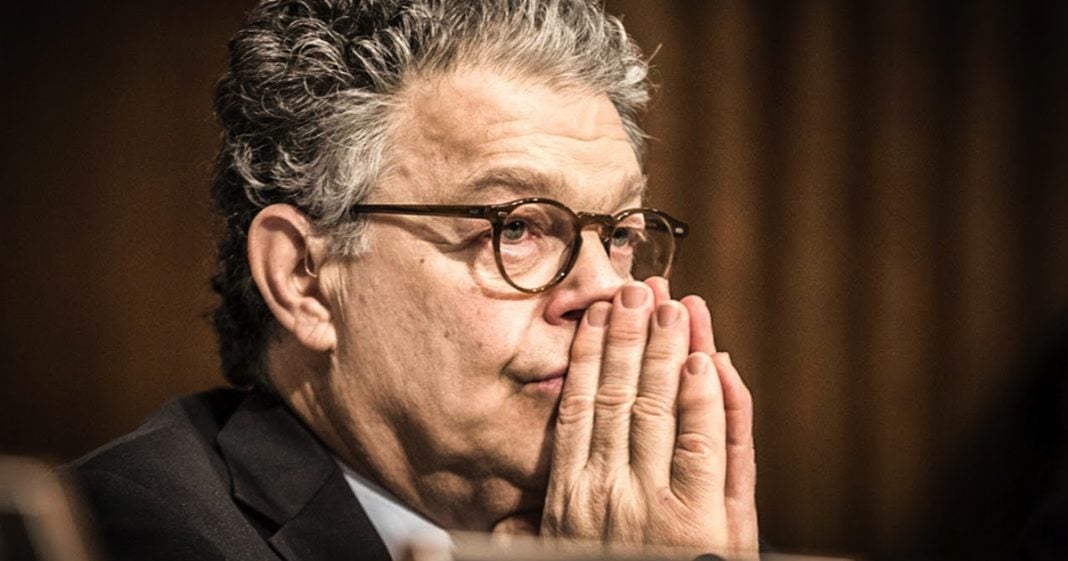 Democratic Senator Al Franken has announced that he will be stepping down from his Senate seat amid the mounting allegations against him of harassment. Republicans like Donald Trump and Roy Moore and countless others need to follow suit immediately, as the accusation against them are far worse than what Franken has been accused of doing, as Ring of Fire’s Farron Cousins explains.

On Thursday, after basically 24 hours of members of the Democratic Party in the Senate calling for Democratic Senator Al Franken to resign, Al Franken announced on Thursday that yes, he will be resigning from his Senate seat. According to reports, Lieutenant Governor Tina Smith in the State of Minnesota is most likely going to be the person appointed by the Governor of Minnesota to replace him, which to be honest, would be a pretty good fit replacing Franken with a woman, I think that’s kind of poetic justice, and I feel like that’s what needs to happen here.

But here’s the bigger thing, at this point no fewer than seven women, and that actually might be eight women, have come out and accused Democratic Senator Al Franken of inappropriately touching them or otherwise harassing them. After the first incident came delight, several weeks ago, I sat here and I explained that Al Franken needed to resign as a result of this. I took a lot of heat for that, there were a lot of angry people on YouTube and Twitter, people sending me emails to my personal email address, which I have no idea how they got it, but whatever, and they were all calling me an idiot, saying that I was overreacting. A lot of them even accused me of probably hiding even worse behavior than what Franken was accused of, which is completely untrue.

However, today and yesterday, and every day in between that, I have stood by my original assertion that Al Franken needed to resign. I’m curious to know what all of those people who were calling me a jerk for saying that, where do you stand today now that seven or eight additional women have come forward against Al Franken? Do you still stand by your original statement? Because I do, and I always will.

There is no place for this in the Democratic Party. And if you’re out there, as so many Democrats are today, arguing that he shouldn’t resign, because we need his vote. You do understand that you’re using the exact same language and reasoning that the Republican Party is using to support that pedophile in the State of Alabama, Roy Moore. You’re using the same logic, they want his vote, so they’re going to support a pedophile, because they want his vote in the Senate.

I’m not going to support a serial sexual harasser just because we want his vote in the Democratic Party in the Senate. That’s not how this works. Things like this, sexual assault, sexual harassment, or any disrespect towards other human beings, transcends party lines. I would be calling for his resignation if he were a Republican, or if he were a Democrat or a Libertarian or a member of the Green Party, or just some dude working a job somewhere else. It doesn’t matter, this kind of behavior is unacceptable, and it has no place in the Senate. And, while we’re talking about this, yes, I do firmly believe that Roy Moore should have dropped out of the Senate race the second these allegations came forward. He has done far worse things than Al Franken could have ever dreamed of.

You know who else has? Donald Trump. I have stated since day one, back during the campaign, that Trump should drop out because of this. I feel personally like this man should spend the rest of his life behind bars having nothing to do with what’s investigated by Robert Mueller. Because of his treatment of women, because of the sexual assault allegations, not just harassment, but assault, that is a jail-worthy sentence for Donald Trump and I will always stand by that, and everybody else has to as well.

We don’t get to pick and choose which accusers we believe and which accusers we say we’re not going to listen to. This is bigger than that. Women deserve to be heard, their allegations deserve to be taken very seriously, and although Franken apologized and admitted it and said he fully supports an investigation, sometimes an investigation is not needed. I’m not saying we should circumvent justice and go ahead and just convict him, but when he admits to it, we as a party have to stand up and say, “We’re better than that. We’re better than you.” And there’s too many people in the Democratic Party today who aren’t willing to do that.