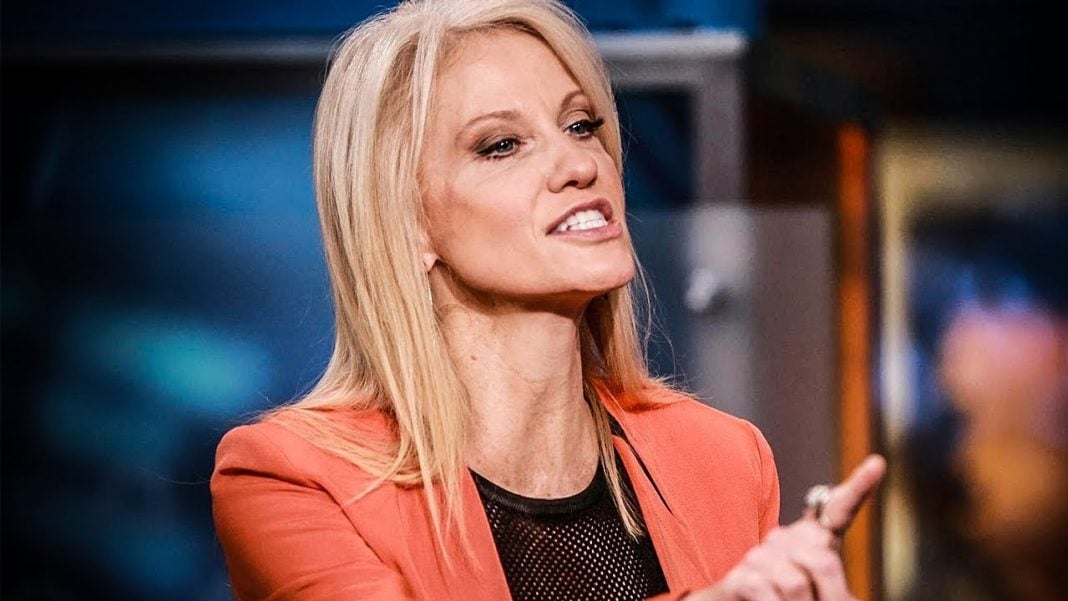 At Politico’s recent Women Rule event, White House counselor Kellyanne Conway was interrupted on stage by a woman in the audience asking about the sexual assault allegations against the President. Conway responded by demeaning the woman, claiming she just wanted “to go viral,” and then said that the woman does have a right to sound like a complete jackass. Ring of Fire’s Farron Cousins discusses this.

White House Counselor or Advisor or whatever she’s calling herself, these days, I understand she’s also, now, in charge of White House opioid policy. Either way, Kellyanne Conway has been having a really bad couple of weeks trying to negotiate, or navigate, the waters between Donald Trump’s sexual assault allegations and the sexual assault allegations against, essentially, everyone else in a position of power. So, recently, at a Politico Women Rule Forum, Kellyanne Conway was heckled by a woman in the audience, who wanted answers, as to why Kellyanne has been so quiet about the president’s own sexual misconduct. Take a look.

Anna Palmer: Excuse me, we’re going to have a con — I just want to say —

Anna Palmer: Yeah it’s fine, but I really do want to say that, we’re here to have a dialogue, and Kellyanne —

Kellyanne Conway: But just remember, you didn’t get the question out of your mouth.

Heckler: I got the question out of my mouth. Your boss grabs women by the pussy! Why do you work for him?

Kellyanne Conway: By the way, you don’t have to remove her on my account. I very much believe in the First Amendment. And I think anybody has a right to sound like a complete jackass if they’d like to.

However, she is actively engaging in a cover up and a smear campaign, on behalf of the president, against women who have been in similar situations as to the one that Kellyanne Conway claims that she also was in. I don’t know that I fully believe it, because anyone who’s been in that situation is not gonna take the side of a serial sexual abuser and try to cover things up for them. Kellyanne Conway, her conduct at that forum, in that video clip, is absolutely unacceptable. Donald Trump’s conduct is unacceptable, and further, it’s unacceptable that he is one of the only men in this country that has been publicly accused, facing numerous lawsuits about it, bragged about it on tape, that hasn’t been held accountable even a little bi,. not once. This man is the worst of the worst of the piggish behavior that we have seen in men in this country throughout the last few years.

Of all the conduct that’s come to light, recently, Donald Trump still ranks right up there at the top, and he is the only one who has not faced any recompense for what he’s done. Kellyanne Conway is more than happy to go out there and call a woman, who tried to bring it to light, a jackass. There was a jackass in that room that day, but it wasn’t the woman accusing or asking about the president. It wasn’t the woman hosting the forum. It was Kellyanne Conway herself.