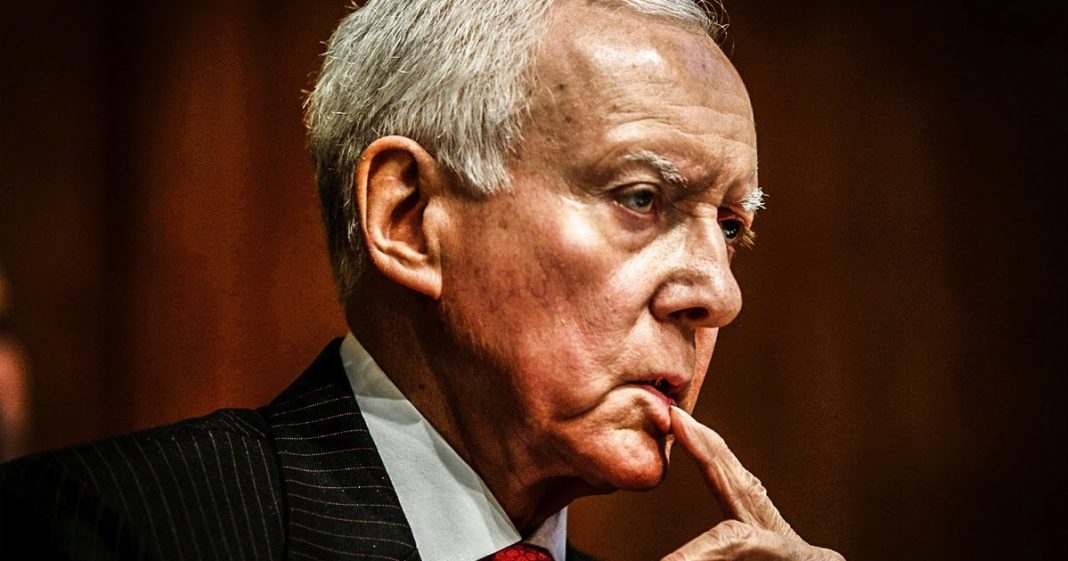 Republican Senator Orrin Hatch did not mince words during a recent floor speech in the Senate where he said that his party is committed to funding the Children’s Health Insurance Program (CHIP) but that he has a really hard time wanting to spend billions of dollars on people who won’t get off their butts and do something for themselves. Again, this program only covers CHILDREN, but apparently Hatch thinks those lazy freeloaders need to somehow get their own health insurance. Ring of Fire’s Farron Cousins discusses this.

As most people are aware, this past week Republicans in the Senate pushed through a tax bill that’s going to increase the deficit by about $1.4 trillion. That’s the overall cost of this particular piece of legislation. But what most people may not understand is that over two months ago, the Children’s Health Insurance Program, run by the federal government, expired. It ran out of funding. That program covers the health insurance expenses for nine million underprivileged children here in the United States.

And recently, Republican Senator Orrin Hatch took to the floor of the Senate to tell everyone that of course Republicans are going to eventually get around to funding this thing, but … And there’s a very big but in here … Orrin Hatch followed up that statement by saying this: “I have a rough time wanting to spend billions and billions and trillions of dollars to help people who won’t help themselves, won’t lift a finger, and expect the federal government to do everything.” Now, let’s be 100% clear here. We’re talking about children. Orrin Hatch was talking about the CHIP program, the Children’s Health Insurance Program, and then said he doesn’t want to spend money for people who aren’t going to help themselves.

So, is Orrin Hatch, Republican Senator, actually suggesting that these children, these low-income American children, are just lazy freeloaders because they’re not out there getting their own health insurance? Now, I know Orrin Hatch says he has a rough time figuring out how to spend billions and billions and maybe even trillions on children, but I’m having a rough time understanding how such a heartless monster was able to last so long in the United States Senate. That’s what’s curious to me.

I’m also having a curious time trying to figure out why Orrin Hatch actually was a co-sponsor of the original CHIP legislation as it passed the Senate in the ’90s. He worked with both Ted Kennedy and Bill Clinton in order to get that passed. But suddenly, we’ve got a trillion-plus dollars available to give the wealthy tax breaks, but we can’t come up with $14 billion … because that’s the cost of it, not trillions as Hatch says … we can’t come up with $14 billion to give nine million underprivileged children in this country health insurance?

Our priority as a country is to give a tax break to millionaires and billionaires, the true welfare queens of American society? We’re not willing to spend any money to lift those up who need a helping hand? We want to hand over the keys to the kingdom to the people who already have everything? That’s what Orrin Hatch stands for. That’s what the Republican Party stands for. And that is what these people, for at least the last 20 years, have always stood for. The Republican Party, as represented by Orrin Hatch and his statement about these lazy children, is absolutely deplorable.