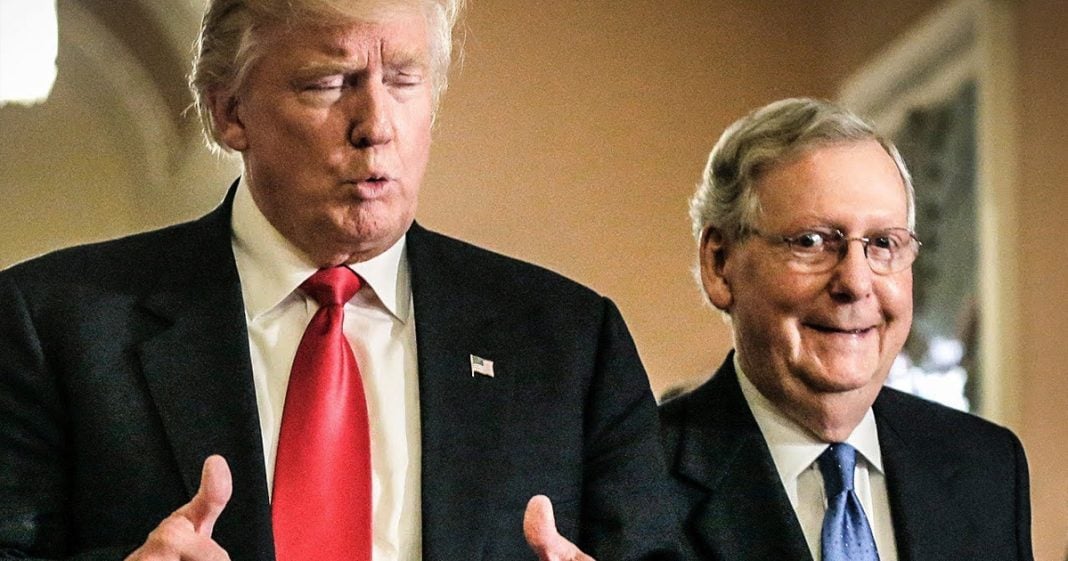 On Friday evening, Republicans in the Senate put forth their “finalized” version of the tax cut bill, complete with hand-written changes to the law because they couldn’t be bothered to make actual edits. The nearly-500 page piece of legislation was voted on at 2am, which didn’t allow Democrats any time to fully read or understand the legislation. This is not how the government is supposed to work, but that doesn’t matter to Republicans, as Ring of Fire’s Farron Cousins points out.

In the early hours of Saturday morning this past week, in fact at around 2:00 a.m. on Saturday morning this past week, Republicans in the Senate voted by 51 to 49 to pass their disgusting tax cut package for the rich. Not a single Democrat supported this piece of legislation nor did any of the independents in the Senate. Now, what was very interesting about this is that at 8:30 p.m. Friday evening, they released the final piece of legislation so that everybody could take a look at it. What happened was that they needed to make some changes, but instead of getting on a computer and making the changes to the document, these morons decided to do it by hand. They had X’d out entire portions of the legislation. They had handwritten little notes in there like, “Add this. Subtract this. This is the amendment.” That was the piece of legislation that these idiots decided to pass at 2:00 a.m. on Saturday morning. It wasn’t finalized. Technically it wasn’t even saved anywhere. They wrote it on the actual printed out copies.

Here’s what this means. Aside from the fact that it’s going to tank the economy, screw over the working class in the United States, we’re all going to pay more money. They get more back. We all know that. But what this shows is that Republicans are intentionally breaking democracy and that is exactly what they’ve always wanted to do. It has been a pillar of the American Republican Party for decades now to shrink the federal government to essentially destroy it. As Grover Norquist says, “To make it so small that you can drown it in a bathtub.” Republicans don’t care about these institutions that have been running since the very first day that the United States was officially a country. They don’t care about the longstanding traditions. They don’t care about the rights and the rules that come along with holding those offices.

All they know is that back in 2010 a Supreme Court decision came down in the Citizens United case that allowed them to receive unlimited corporate money for their campaigns. Ever since that day, and to be honest probably even a little before that, but ever since that particular day, they threw all pretense out the window and they made it abundantly clear at every given opportunity that their only goal as legislators is to make their corporate donors wealthier. That is what this tax bill is about and that is what the assault on the federal government is about and that is exactly what it is. This is an assault on our governing institutions. This is an assault on American democracy, on the Senate itself, on the House itself and certainly on the presidency itself.

A few weeks ago, a few months ago, whatever it was, when we had a few Republicans who made a good decision to kill the repeal and replace attempt by Republicans, Murkowski, Collins, McCain, all of that grandstanding that these folks did flake with this constant attack on the president. It meant nothing. It was window dressing. All of these jack assess just turned around on Friday or, excuse me, Saturday morning and voted for this tax cut bill that’s going to strip people of their health insurance. I believe about 14 million people stand to lose their health insurance as a result of this piece of legislation.

Everything doesn’t matter. The things they said, “They’re standing up to Trump. They’re standing up for the working class.” When the chips came down, when they had it all on the line and could have taken a clear stand for the American public, they chose not to do it. They chose to side with their wealthy donors and that is what they will continuously choose to do. That is what this is about. That is what it will always be about and that is why these Republicans that are in there have to go. They do not care about the job. They do not care about the responsibilities. They do not respect the power that comes along with that office. They are attempting to destroy the Senate and the House and so far they’re doing a pretty good job of it.