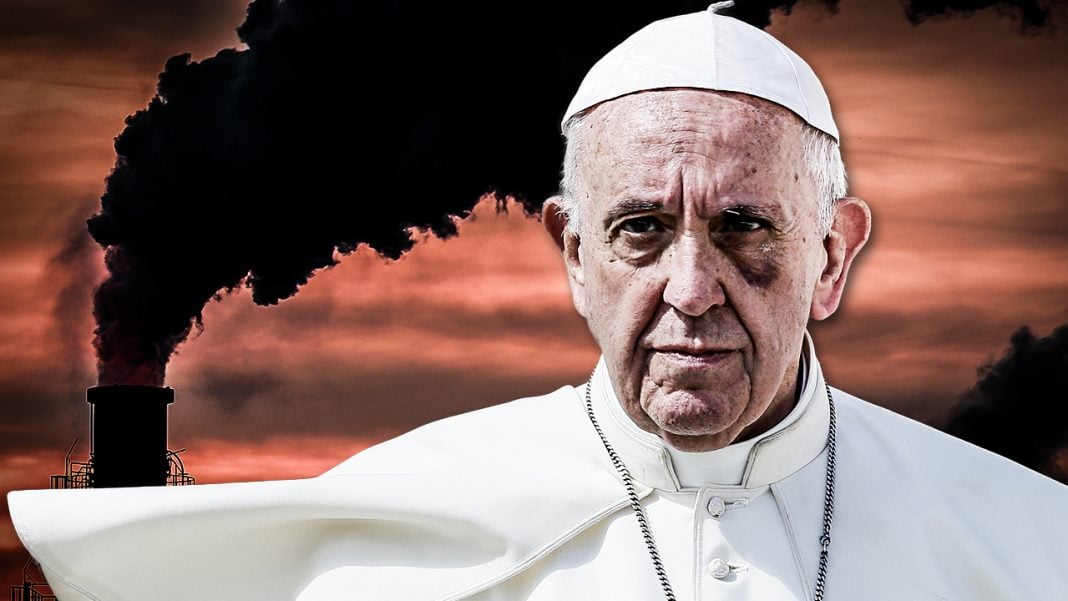 The right wing Federalist Society is furious that Pope Francis actually delivers populist messages and cares about things like climate change, so the organization is lashing out at the Pope in order to get him to stop. This is a fight that they absolutely can’t win, and there is something truly sinister about their motivations, as Ring of Fire’s Farron Cousins explains.

Conservatives across the United States are actually pissed off at Pope Francis for a couple of reasons, the first being he’s actually more of a populist and is really reading the bible and attempting to interpret it in a way that represents the way of life for people all across the planet, specifically the love of money and the neglect of the poor. Pope Francis has been huge on telling the wealthy elite across the planet that they need to do more to help the less fortunate. Pope Francis is attempting to get the church to help the less fortunate by kicking these wealthy priests out of these lavish churches and using them as homeless shelters. You know, things that the bible actually thinks we should do, but that is not the only thing pissing off Conservatives right now.

Conservatives are even madder at Pope Francis because he believes we should do something to protect the planet from climate change. The Federalist Society, a right-wing think tank organization funded by people like the Koch Foundation have come out this week with an op-ed attacking Pope Francis as somehow being out of touch with reality because he believes that we should do something about climate change.

Here’s a couple of the little subheaders throughout the article that they wrote. “Climate change is a mask for economic control,” so not only are they mad that Pope Francis is saying we should do something about climate change, but they think that he is somehow trying to work with I guess the New World Order type conspiracy folks to control the global economy by getting us to care about the future of the planet. Now, if you’re having trouble wrapping your head around that, don’t worry. I am too. It’s really hard to wrap your head around something that stupid, but this is what the Federalist Society believes.

Again, if you go through and look at the funding of the Federalist Society, you’ll find all kinds of different organizations and foundations that fund them, so then you got to go look through those foundations and see who funds them, and sure enough, you find people, Charles and David Koch, Exxon, other fossil fuel entities, other organizations that actively deny climate change, and they’re all funneling it into the Federalist Society, who’s now funneling that anger into the freaking pope.

Another subheader. “This is an unholy obsession” for Pope Francis. Unholy obsession to protect what he believes to be God’s creation. That’s actually in the bible that you’re supposed to protect the environment, you morons. In case you’re not that familiar with the Federalist Society, they are the group that’s currently feeding judicial nominees to the Mitch McConnell, who is then feeding them to Donald Trump. They are the ones who are working to pack our courts right now with right-wing corporate political hacks who will do everything to give everything to corporations and take away our rights as consumers, specifically our right to a clean environment.

That is why the Federalist Society is attacking Pope Francis and that is why they don’t want you to know who’s actually funding their organization and they’ve shrouded in getting money from other foundations and all of that. It’s really not that hard to find once you start digging just a little bit, but that’s something most people aren’t willing to do. You’re going to pick a fight with the pope about something like protecting God’s creation, you better come with more than just a couple of talking points about economic control and unholy obsessions because if you want to get in a fight with the pope, you better make sure that your history is about as squeaky clean as possible because I don’t think that you’re ever going to win an argument with the leader of a religion that has billions of followers around the globe when all he’s doing is trying to protect the planet.