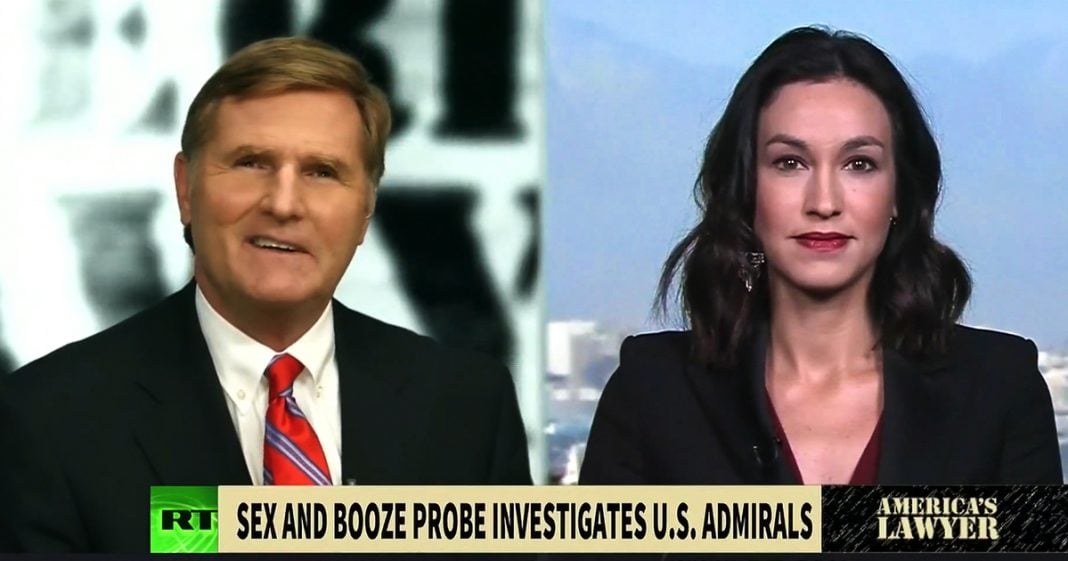 Via America’s Lawyer: Mike Papantonio talks with Brigida Santos on how a massive investigation of US Navy corruption in Asia that featured wild parties, bribes and prostitutes has expanded to include more than 60 admirals.

Mike Papantonio: Sixty U.S. Navy Admirals are now part of a massive investigation looking into bribery and corruption charges that center around the now-jailed former Malaysian contractor known as Fat Leonard. The allegations include pay outs in cigars, watches and rotating carousels of prostitutes in exchange for military information.

Joining me now to talk about that is correspondent Brigida Santos. Brigida, oddly enough, not a lot of coverage on this story from corporate media. One of the details of the allegations on these officers and how many military personnel are under investigation, it does involve contractors. It always usually goes back to weapons contractors, government contractors. Where does this one go?

Brigida Santos: Four hundred and forty active and retired sailors are now under investigation for ethics violations, including those 60 admirals that you mentioned. Keep in mind, there are only 220 admirals in the entire Navy, so this is very widespread. Thirty-four people are facing criminal charges, 19 of whom have already pleaded guilty in federal court. This is by far the worst corruption case in U.S. Navy history, Mike.

Mike Papantonio: Fat Leonard, that’s this guy’s name. Fat Leonard Francis is now in jail for bribing these officers. Who is Fat Leonard? It sounds like some kind of character out of a cheesy novel. How did he end up doing business with the U.S. Navy in the first place? I ask that question, I kind of know the answer because we understand how corporate contractors, how government contractors, weapons contractors, military contractors, I’ve seen how they work. It’s a pretty ugly picture. Tell us about this Fat Leonard, if you would.

Brigida Santos: Leonard Glenn Francis is a 350-pound defense contractor from Singapore. He’s said to be very charming and likable. In fact, so much so, that he bribed Navy officials and employees with all of those lavish gifts and prostitutes and things like that in exchange for classified information about the movement of war ships and submarines, information about contracts that his competitors had, and even information about ongoing law enforcement inquiries into his company, Glenn Defense Marine Asia.

He then used all of that information to get U.S. Navy ships to dock at ports that his company controlled so that he could then overcharge the Navy $35 million in services for things like removing sewage, barges, food supply, things like that. He did this for over a decade. In fact, he built up such a good relationship with the Navy that his company was the one most depended on by the Navy to resupply and refuel its vessels in the Seventh Fleet. Of course, the Seventh Fleet is the largest Navy fleet in Asia, and it’s responsible for patrolling the Indian and Pacific Oceans, Mike, so this is incredibly outrageous and shocking.

Mike Papantonio: A book was just published that I wrote, it’s called Law and Vengeance. It’s a legal thriller, and it’s actually about this very topic of government contractors. What we’re talking about in this story is just the edge of how corrupt the system really is. When people start understanding how many billions of dollars, billions of dollars, every single year that we waste in these government contracts kinds of scenarios, where nobody talks about it. Media doesn’t talk about it, government sure doesn’t talk about it, and it’s billions of dollars with people, not exclusively with all the Fat Leonards in the world, but there’s a lot of it.

How long do you think this went on with Fat Leonard and the Seventh Fleet? What do you think?

Brigida Santos: This went on, as I said, for over a decade. Federal agents actually nabbed him in 2013. They lured him to San Diego under the pretense that he would be meeting with some admirals who were going to offer him these lucrative shady contracts. He took the bait, of course, and was arrested, so this has been going on for a really long time, Mike.

Mike Papantonio: It’s puzzling to think how one man, Brigida, can end up having so much ownership over the loyalty of a branch of the U.S. military. Is there anything out there that explains how so many caved in to this sex and booze trade? We get it, money goes a long way in any kind of setting, whether it’s an admiral, whether it’s some contractor that believes they can pay their way into any opportunity to steal from taxpayers. What is your take on this?

Brigida Santos: It was really just super easy for him. It sounds like he just bribed people, offered them things. He was very charming. People said that he was really good at getting close to them, exploiting their weaknesses. He would find out if people had marital problems or financial problems and then exploit those problems to get them to agree to go down this dark rabbit hole with him. One Navy official said he was so good at it, that even the KGB couldn’t have done this.

He was really offering people, in one case, things like escorts dressed up like Santa’s helpers just to get a $660,000 sewage bill slapped onto the Navy. It really wasn’t that hard. It simply comes down to money here.

Mike Papantonio: My bet is that this probably originated with a whistle-blower. The problem is, our firm, for example, we handle whistle-blowers in these types of cases, and when you see how the whistle-blower is handled, the person who’s trying to say to the public, trying to say to the government, “Look, we’re being ripped off for billions of dollars because of these crooked kinds of arrangements on bidding,” or whatever, fixed bids, whatever it is. People have no idea about how much taxpayers lose on this because nobody talks about it.

This type of scenario with Fat Leonard, I can promise you, happens every single day and there’s nobody that’s there to account for how many billions of dollars taxpayers lose because of these scams. The Navy is funded with U.S. tax dollars, of course. How much money did these officers and Fat Leonard scam from the American public, where the Department of Justice, I guess, there is some plan to get it back? How much money are we talking about, do you think here?

Brigida Santos: This was $35 million dollars. The judge has ordered all of the defendants to repay that amount in restitution but, at the same time, the judge has acknowledged that those people are not going to be able to pay back that money because they simply don’t have the means. In addition to this scandal, there are several other problems in the Navy. In fact, four major accidents happened in Asian waters this year where the Seventh Fleet operates. Just this week, two Navy SEALs are now under investigation for allegedly murdering a U.S. Army Green Beret, who had discovered that they were reportedly stealing cash that was meant for informants, Mike. This is an entire branch of our military, it sounds like and, if it’s happening there, it might be happening elsewhere.

Mike Papantonio: Of course, there’s the $12 billion dollars that disappeared in Iraq, that the government still has no explanation on where it went, and the story goes on. Brigida, thank you for covering this. We’re going to cover a lot more of these whistle-blower kinds of cases.