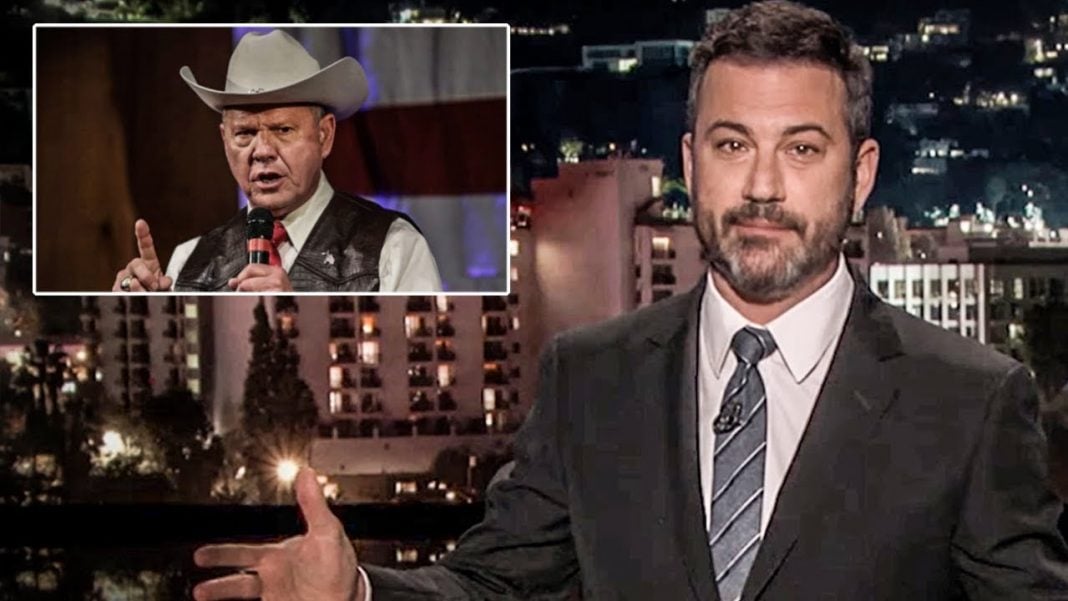 Embattled Alabama Senate hopeful Roy Moore decided to pick a fight with late night talk show host Jimmy Kimmel on Twitter, and it ended just as you would expect. Kimmel hammered Moore for his phony religious conservatism and taunted him with the mounting sexual misconduct allegations against him and all Moore could do was try to paint Kimmel as an “out of touch” Hollywood guy that’s just being mean to southerners. Ring of Fire’s Farron Cousins discusses this.

Former Alabama Supreme Court Justice turned Senate candidate Roy Moore has been fighting back against the allegations against him, that he preyed sexually upon teenagers, at least while he was in his 30s, possibly even beyond that, and as usual, late night talk show hosts jumped on this, because Roy continues to basically tell us that none of this is true, even though we have multiple women, multiple witnesses, multiple organizations saying, “Yes, this all happened.”

One of the people who jumped ferociously on Roy Moore was late night talk show host, Jimmy Kimmel, and in fact, Kimmel was getting to Moore so badly that Roy Moore decided his best course of action was to go on Twitter, and start a feud with Jimmy Kimmel.

Now, real quick, before we get into that, let’s keep in mind that Jimmy Kimmel is one of the main people who helped bring the Republican healthcare debacle to the broad attention to the American public. He made it a mainstream issue, and he is credited to helping to defeat their disgusting attempt to repeal healthcare from a lot of people in this country.

So, picking a fight with him, when he’s got the wind at his back and the public on his side, and he’s doing a damn good job exposing Republican hypocrisy and just downright greed, probably a very poor course of action for a guy like Roy Moore.

But nonetheless, Moore decided to do it, and he tried to portray Kimmel as some out-of-touch, Hollywood, liberal elite, that doesn’t understand our Southern and good Christian values. He did specifically mention Kimmel by name in that tweet, so Kimmel responded, “Let me know when you get some Christian values.”

Pretty good comeback, if you ask me, seeing as how Roy Moore is the guy, again, who has been accused by multiple women of preying upon them, while they were in their teens, he was in his 30s, was banned from a mall in the state of Alabama, because he would show up there and try to pick up teenagers, while he was in his 30s. Those don’t exactly scream “Christian values” to me, nor should they to anyone else in this country.

Following that tweet, Roy Moore said, “Why don’t you come down here? Why don’t you come, instead of mocking Southerners? Come down here and see us, you out-of-touch, Hollywood, liberal elite,” to which Jimmy Kimmel responded, “Okay, but I’ll leave my daughters at home.” Again, another dig at Roy Moore and his sexual abuse allegations.

Here’s the problem that a lot of people don’t seem to understand with the Roy Moore debacle down there in Alabama. Roy Moore has pulled even with Doug Jones, the guy who prosecuted the KKK, in this Senate race. I happen to live in an area that’s so close to the state of Alabama we share local TV stations with them, so I get to see Roy Moore’s campaign commercials pretty much any time I turn on my television, and you know what they say? “These false allegations, a liberal smear tactic against me,” and an attack by the Republican establishment. He even calls out Mitch McConnell, saying he’s behind these attacks.

Jimmy Kimmel understands this. If we did not have national attention on this race, if people like Kimmel, and others in the news media, and other late night talk show hosts and comedians all over the country, if they weren’t bringing more attention to this, Moore, I guarantee you, would still be up in the polls by about 10 or 15%. We need these people, these high profile American citizens and TV hosts, to be out there every day, not only talking about these issues, but openly fighting back and mocking them, like Kimmel is doing, to remind this country just how disgusting the Republican Party has truly become.