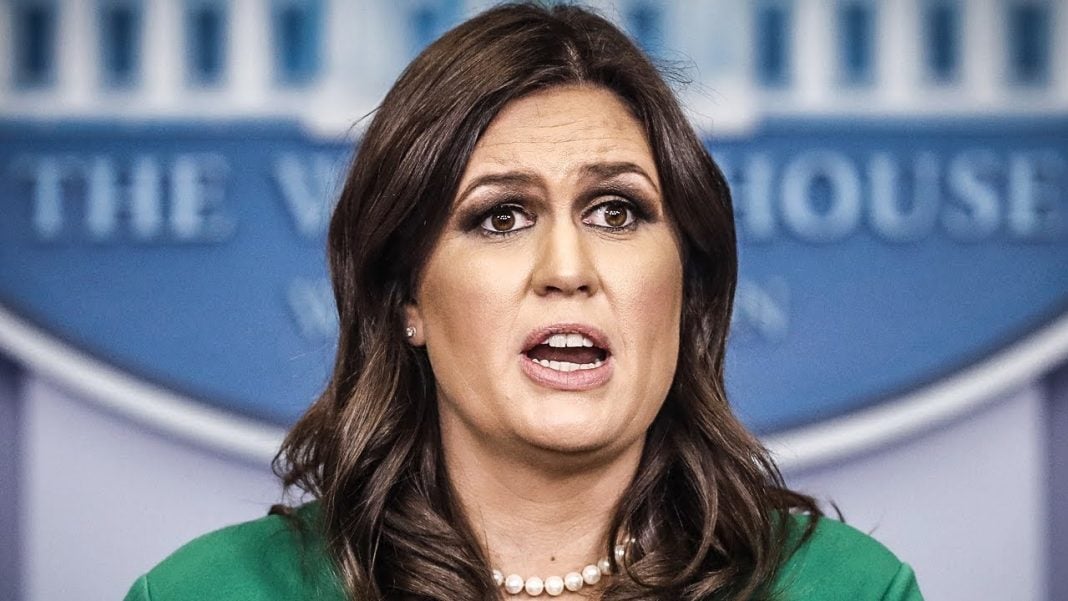 Sarah Huckabee Sanders defended Donald Trump’s retweets of a neo-fascist British organization by saying that it is perfectly fine for the President to lie, as long as that lie makes Muslims look bad. Ring of Fire’s Farron Cousins discusses this.

On Wednesday morning of this past week, Donald Trump decided to tweet out a couple of videos from a Twitter account that was run by a woman who is involved in a neo-fascist, essentially a white nationalist, organization over in Britain. All of these videos showed ISIS Muslims being violent toward other people.

Well, as it turns out, at least one of the videos was a complete fake, but that didn’t stop Donald Trump from tweeting it out. When confronted about the fact that at least, again, one of these tapes was completely fake, White House press secretary Sarah Huckabee Sanders defended Trump the only way she knows how. Take a look

To verify information before they re-tweet it out. Isn’t fake news not to do that?

So, it doesn’t matter if the video is fake?

Look, I’m not talking about the nature of the video. I think you’re focusing on the wrong thing. The threat is real. That’s what the president is talking about is the need for national security, the need for military spending, and those are very real things. There’s nothing fake about that.

That’s right ladies and gentlemen, doesn’t matter if what Donald Trump essentially tweeted out was a lie. What’s real are that Muslims exist and we have to get rid of them. That is essentially what Sarah Huckabee Sanders is telling us in that video clip. All Muslims are violent. Any non-white person around the planet is a problem in the eyes of Sarah Huckabee Sanders and Donald Trump. It doesn’t matter if he’s lying about it. It doesn’t matter if those things actually didn’t happen. We still need to stamp them out just for good measure. Right?

Donald Trump’s re-tweeting of these videos and his constant insistence that all Muslims are evil shows you exactly the intent behind his Muslim ban that he had put in place. This isn’t about keeping America safe. This is about good old fashioned racism. At least, to his credit, George W. Bush was only racist against Muslims behind closed doors. He wasn’t out in the public saying these things. He actually told us we had to be a little more tolerant. Of course, then he went and bombed the shit out of their countries, because he hated them too. Again, at least he had the courage to pretend he didn’t.

Donald Trump has thrown all pretense out the window. He is a racist. He is a racist. That is the one thing you need to take away from this past year of having Donald Trump as our president. He is a racist. According to Sarah Huckabee Sanders, that’s perfectly find. It doesn’t even matter if he lies to prove a racist point, because at the end of the day, the only thing this administration cares about is furthering the agenda of white people all around the globe and stamping out anyone who doesn’t look exactly as they look.