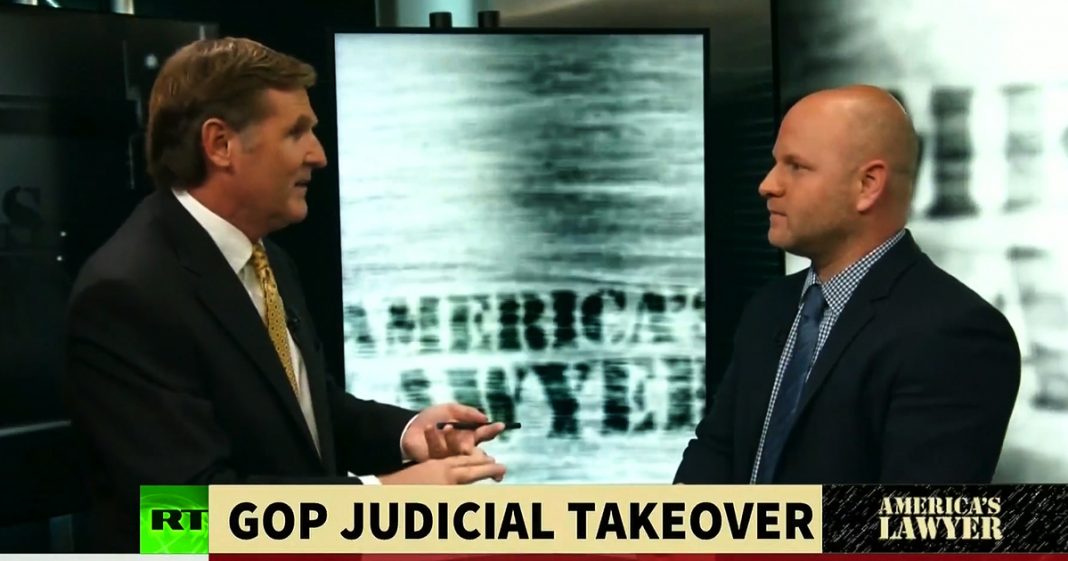 Via America’s Lawyer: Mike Papantonio is joined by Farron Cousins, Executive Editor for The Trial Lawyer Magazine, to talk about how the dominating topic of “Tax reform” is keeping us distracted from another story with potentially more catastrophic consequences: Judicial appointments.

Mike Papantonio: Tax reform is dominating the headlines. But there’s those headlines that often keeps us distracted from another story with potentially more catastrophic consequences. That is Republican Senator Mitch McConnell’s plan to confirm his ninth federal judge.

Joining me in a talk about this is Farron Cousins, Executive Editor for The Trial Lawyer magazine. Farron, what does it mean for people living in this country … We see all the appointments, one right after another. Everybody seems to be focused on Senate races, and House races, and the White House. And right now, democracy’s being taken away from them one judge at a time. What’s your take?

Farron Cousins: Well you know, this, as you said, would be the ninth federal judge that they’re trying to slam through this year. Donald Trump inherited over 100 vacant court seats throughout this country that he can appoint a judge for for a lifetime appointment. And the American public has just greeted this with a big, giant yawn. It was all about that one SCOTUS seat, you know, the one that Merrick Garland was nominated, they didn’t let him out of committee.

And then we forget about the fact that Obama did a very poor job. And some of it was due to Republican obstruction, no question about that. But leaving Donald Trump, the Republican Congress, the Republican Senate, with 100 federal judgeships …

Mike Papantonio: Well let me help you with that just a second. Understand, there was a time where Obama had the House and the Senate for two years. You remember that? He was … “I’ve got to reach across the aisle. I have to make friends with these folks. We have to compromise.”

That’s where he lost it. And because of that, right now the federal system is so heavily-packed with Republican appointees that they affect salaries, they affect money issues for everybody, the economy, the environment, their health. I mean these are judges that rewrite legislation by way of their court decisions. Right?

Farron Cousins: Oh, absolutely. And again, with Donald Trump and the Republicans having 100 of these to fill, what they’re doing right now is they’re going to these Conservative think tanks, specifically The Federalist Society is helping to kind of put judges in Mitch McConnell’s lap. They’re handing him lists of people and saying, “This is a good one. This is not a good one. This is a pro-corporate. You don’t want to get this guy, he’s pro-consumer.”

And that’s what they’re doing. It’s all about packing the courts with these pro-corporate, anti-consumer judges just so that corporations have a bigger edge when they get to court.

Mike Papantonio: But Farron, I remember you writing about this years ago. And you said, “This is coming.” You kept urging Obama, urging, while he had a chance, to appoint federal judges during that two year period of time when he could’ve gotten it done. And he just acted like, “We’re going to get along. These are just the first two bumpy years.”

And because of this, right now they own the Executive Branch, they own Congress, and now they’re transforming the Judiciary Branch to where they own it all right now, don’t they?

Farron Cousins: Well exactly. And again, this is the branch of government American public does not pay any attention to. And it really is the most important, because these people, these more than 100 people, these are lifetime appointments. This cannot be undone by the next administration. You can’t just say, “Well, in four years …” No. You just lost this court, this seat, for a generation if not longer.

Mike Papantonio: Farron Cousins, thanks for joining me.