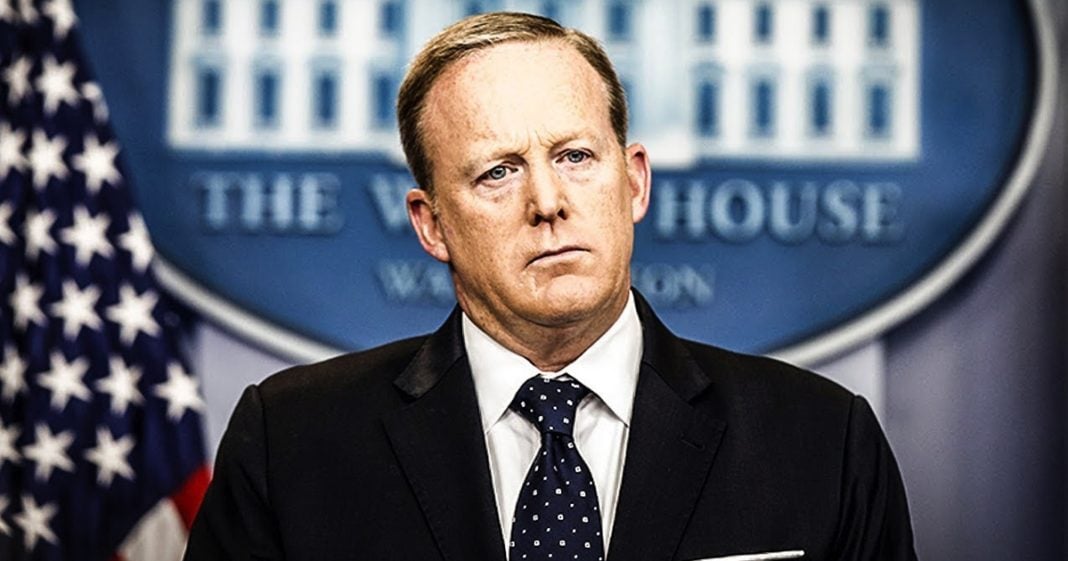 Former White House Press Secretary Sean Spicer told Fox News recently that the women accusing Donald Trump of sexually assaulting and/or harassing them deserve to be heard, just like the other victims coming forward in the United States. If the public took the accusations against Trump as seriously as they have against everyone else, Trump never would have made it to the White House. Ring of Fire’s Farron Cousins discusses this.

Former White House Press Secretary Sean Spicer has been having a hard time finding a job since leaving The White House. But, in spite of the fact that he hasn’t found full-time employment to pay the bills, he has been a regular contributor from time-to-time on Fox News, and recently he decided to take up the issue on Fox News of the sexual assault, and the sexual harassment allegations that have been lobbed against the president, and the lawsuits being filed against the president, Donald Trump, for these actions. In fact, Sean Spicer, the guy who defended the president during his time in office, actually said that we have to treat these allegations seriously, and that the women accusing Donald Trump of this behavior deserve to be listened to. Now, he also added at the end of that, you know, but we’re a nation of due process and let’s not jump the gun and assume he’s guilty. However, the fact that even Sean Spicer at this point is willing to say, “You know what? We have to hear these women out.” That is a huge turnaround in terms of who is loyal and who is not loyal to Donald Trump.

I think Sean Spicer to his credit, at least a little bit, may have seen the light. He may understand at this point that with all of the sexual assault allegations in this country that are coming out today, we have to take Donald Trump’s allegations seriously if we’re gonna take any of them seriously at all. So far, any time somebody has been accused of this kind of behavior, they have felt the repercussions of it. Matt Lauer immediately fired. Charlie Rose, Al Franken, though he didn’t lose his job, he had to come out and give a press conference and he’s had to address these, and even more women are coming forward still. Roy Moore tanked in the polls for a little bit, but unfortunately because he’s a Republican the folks in Alabama have given him a free pass, and he’s now once again tied with Doug Jones. But, the bottom line is that everybody has at least had to face some kind of consequence for this behavior. Kevin Spacey, his show on Netflix was canceled. But, not Donald Trump. Nothing has happened to him and think that’s what’s starting to get at Sean Spicer.

Keep in mind, this a guy who actually understands what’s happening in The White House. He understands who Donald Trump is, he knows the kind of person that he is, and if he is saying we need to listen to these women, I’m willing to bet it’s because he knows a little bit more about it than the rest of us do. Unfortunately, I actually have to take Sean Spicer’s side on this because again I do believe that this man knows more than we do about this particular subject area. After all, he was with Donald Trump by his side for several months throughout the administration. He got to meet with lawyers, he understands what’s happening in these suits, and I guarantee you he knows whether or not these women are telling the truth. And something tells me, they are.