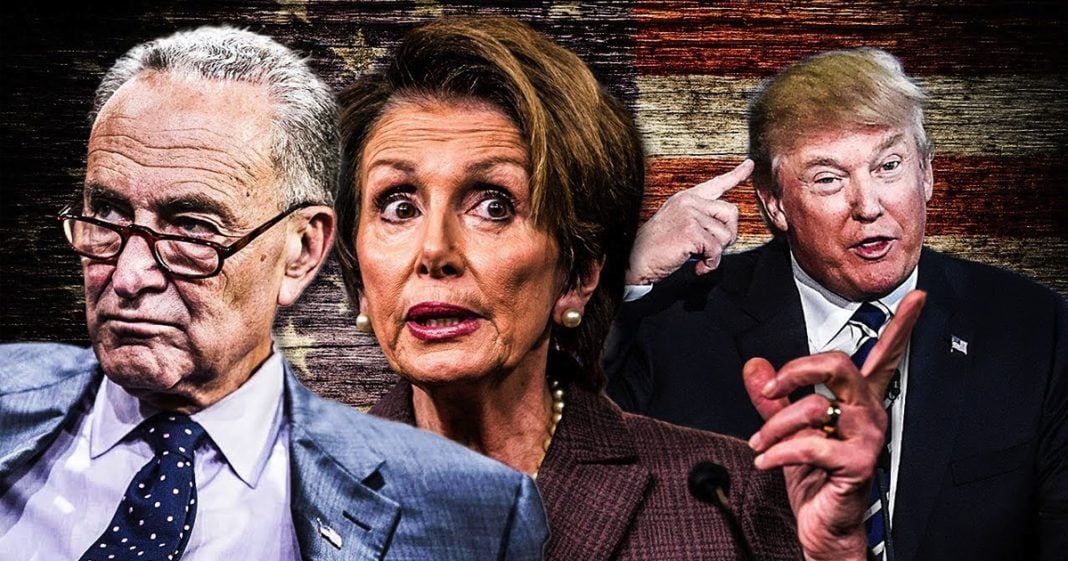 On Tuesday, Trump was scheduled to meet with Democratic leaders Nancy Pelosi and Chuck Schumer, but before the meeting Trump decided to insult the two Democrats on Twitter. Pelosi and Schumer then opted to forgo the meeting, prompting greater fears of a government shutdown, which Donald Trump appears to welcome with open arms. Ring of Fire’s Farron Cousins discusses this.

On Tuesday, Donald Trump was suppose to meet with Republican and Democratic leaders to come up with a budget plan in order to prevent a government shutdown in the month of December. And, before the meeting took place, Donald Trump decided to get on Twitter and attack Chuck Schumer and Nancy Pelosi, the two Democratic leaders who were supposed to meet with him, saying “I don’t see a deal. I’m supposed to meet with ‘Chuck’ and ‘Nancy’.” He put their names in quotation marks for some reason. But he said, “They’re too busy, or too concerned with trying to let illegal immigrants into this country. They’re very weak on crime. I don’t see a deal.”

That is what this moron said before he was supposed to meet with these people in order to make a deal. They guy who literally wrote a book called “The Art of the Deal” doesn’t know how to make a deal to keep the government functioning. Schumer and Pelosi ended up obviously not showing up to that meeting. Donald Trump attempted to shame them, by having empty seats next to him with their names on it, as if that somehow sent them a message. And in the pictures you could see, way far down past the empty seats, is lonely little Paul Ryan with nobody even near him.

But that’s beside the point. The point here is that Donald Trump doesn’t know how to be one, a decent human being. But two, a freaking leader. We need a president that understands how to work with other human beings to get things done. And not just do that, but also not get on Twitter before the meeting and insult them, and then act indignant when they don’t show up for the meeting, that you already told the public was going to result in not having a deal completed.

Schumer and Pelosi did admit that the reason they didn’t go is because, “Yeah, Donald Trump said we’re not going to make a deal, so why waste our time working with him, when we can just work with Republicans in Congress and the Senate and try to get something figured out without having to go through this madman.” And again, if a deal is not reached, the government will shut down, and we’ve seen what happens when that happens.

Back in 2012, government shutdown, thanks in part to Ted Cruz, and the economy lost billions of dollars. People lost a hell of a lot of income. And now we’re planning on doing that basically right before Christmas and Donald Trump has hinted at the fact that he doesn’t think it’s such a bad idea. Perhaps somebody should tell him that if the government shuts down, he still has to go to work. It’s not like he just gets those days off, like he wants. He still has to do his job as president. It’s just the people who work for National Park Service, other branches within the government. They’re the ones who won’t get paid. They’re the ones who won’t be going into the office every day. Donald Trump, you still have to work, so you may not want to be rooting for a government shutdown at this point, especially because it’s going to cost you politically.