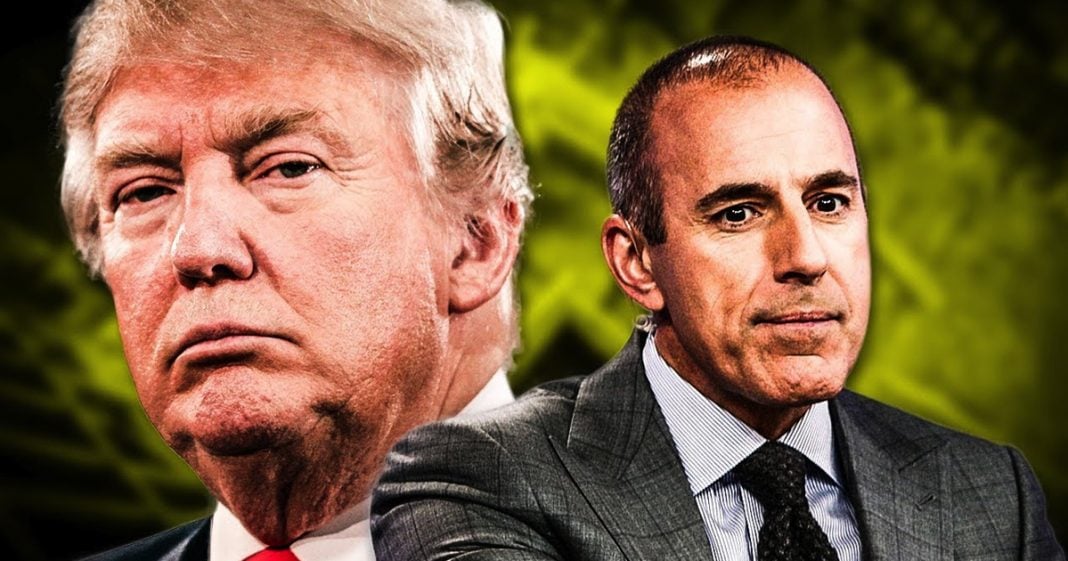 Matt Lauer has lost his job as the co-host of The Today Show following allegations of sexual harassment, making him just the latest in a long line of predators who have faced some sort of comeuppance for their actions. But not Donald Trump – the man who has been accused of assault and harassment by no fewer than 15 different women (and he’s currently being sued by a few of them) has not had to face any negative consequences from his actions. Ring of Fire’s Farron Cousins discusses this.

It was announced recently that Matt Lauer, the cohost of The Today Show on NBC has been fired due to sexual misconduct allegations that have arisen. Specifically an event that took place during the 2016 coverage of the Summer Olympics. So Matt Lauer gone, Charlie Rose, Al Franken had to give his pitiful little press conference where he promised he was going to do better, John Conyers, Roy Moore getting a kick down there in Alabama although his numbers are somehow rebounding, Harvey Weinstein, Kevin Spacey. The list is seemingly endless at this point of men in this country who have been accused of sexual harassment and for the most part almost every single one of them has had to pay some kind of price for these allegations for their conduct.

Everybody that is except Donald Trump. Donald Trump has been accused of sexual misconduct by no fewer than 15 women. One of them actually happens to be his ex-wife. And yet to this day Donald Trump has never had to face a single consequence as a result of his behavior. And in fact, he’s gone so far recently as to begin claiming that that Access Hollywood tape isn’t actually him on the tape. Access Hollywood has since come out and said, “No, that is you you idiot.” But nonetheless, Donald Trump has somehow managed to weasel his way out of every sexual harassment, out of every sexual assault accusation that has been thrown at him. Meanwhile, men all over this country are rightfully either losing their jobs for it or paying a huge political price for it. But not Donald Trump.

Why is it that a guy like Donald Trump can get away with these things but other powerful men can’t? Why is it that Donald Trump can get on Twitter and attack people like Al Franken or Matt Lauer for the allegations against them but refuse to accept the reality that he does the same thing? Why does he believe those women and not the ones accusing him? Gretchen Carlson, a former Fox News host was kind enough to point that out to Donald Trump on Wednesday morning on Twitter. The fact of the matter is that Donald Trump has been accused of doing some of the same things and in many cases far worse things than all of these other men have also been accused of.

So at this point why is he escaping? Why is he getting through? Why are we letting it just roll off our backs and going after everybody else and ignoring what the President has done? Everyone should be accountable. It doesn’t matter if you’re a Democrat or a Republican or a Libertarian or anything else. Or if you’re the President of the United States. If you act like a jackass, if you break the law, if you treat women as objects rather than human beings, you need to face a comeuppance. Everybody else is getting theirs. It’s past time for Donald Trump to get his for what he’s been doing for decades.