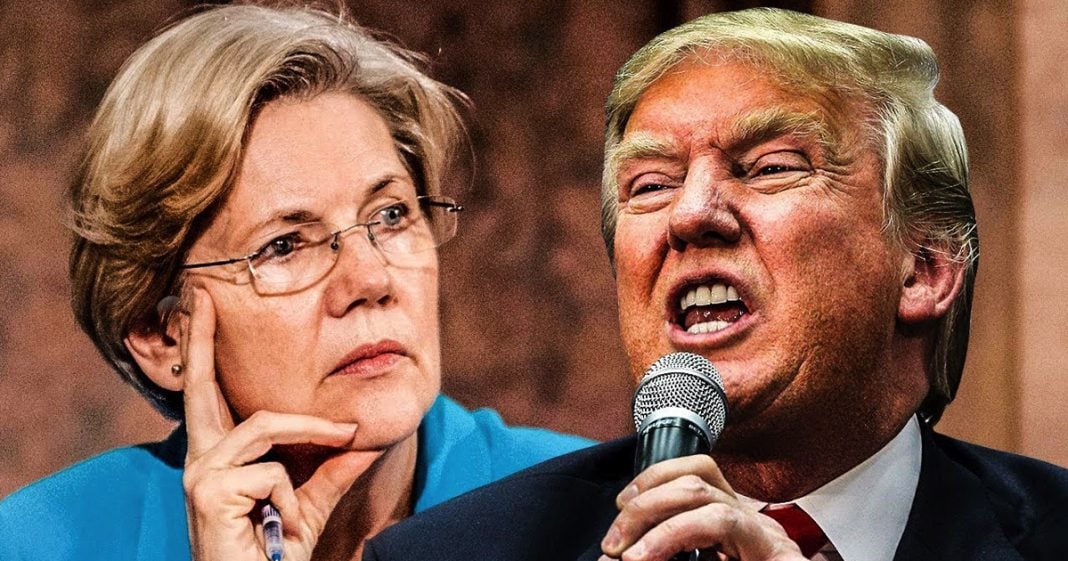 On Monday, Donald Trump presented honors to Native American Navajo code talkers who served in WWII, and during the event, he had to throw out a racial slur at Senator Elizabeth Warren. The Native American community has fired back at Trump, letting him know that his comment was, in fact, racist and insensitive. Ring of Fire’s Farron Cousins discusses this.

On Monday, Donald Trump welcomed three Navajo veteran code talkers from World War II to the White House to be honored for their service to the country. During this ceremony, this service, where he was honoring these three Native American code talkers, Donald Trump referred, didn’t mention her by name, but he said, “We’ve got a senator out here. They call her Pocahontas.” This was obviously, in regards to Senator Elizabeth Warren who Donald Trump has repeatedly referred to as Pocahontas both during the campaign and during his presidential administration.

This is a racial slur against a sitting senator by the President of the United States and I know a lot of Republicans online were quick to point out like it’s not a slur it’s somebody’s name. Everybody calm down. Just get over it. It’s not a big deal. Well, you know who thinks it’s a big deal? The Native American community who did come out at the end of the day and say, “Yes, this was absolutely a racial slur.” If you have any question about it, you have to look at the intent. Donald Trump referred to Elizabeth Warren as Pocahontas not in a great way, but in a negative light. He used the word as a slur to demean and basically, put a derogatory connotation on the word, which is what makes it a slur.

And, by the way, if members of the Native American community say that is a slur, I’m gonna go ahead and side with them over Donald Trump and the Republicans who defend him every day of the week. To their credit, the three Navajo code talkers who were there, did not react whatsoever to Donald Trump’s comment, which is probably the best response that they could give, but this just shows you how insensitive, stupid, disgusting and immoral our President of the United States truly is. You’re sitting in front of three men who had far more courage that you’d ever had in your life and you throw a racial slur, derogatory towards those people, even if you’re talking about somebody else. Because you have no class. You have no understanding of normal interactions with other human beings. You are a worthless piece of crap.

And anyone who still stands by this man, you can go ahead and claim that title for yourself too. Because that’s what you are. If you’re out there defending Donald Trump or saying that, “Yeah, he’s telling it like it is. He’s talking like a real man.” Were some of the comments on Twitter. You’re just as disgusting and deplorable as Donald Trump himself. Donald Trump is 100% a racist. Anyone who tells you otherwise is absolutely lying. The evidence is overwhelming in this point and when he as the audacity to sink down to a brand new level to bring that label of racist onto a modern day White House, anyone who supports him needs to be wearing that label as well because that is exactly what you are if you still support this man.