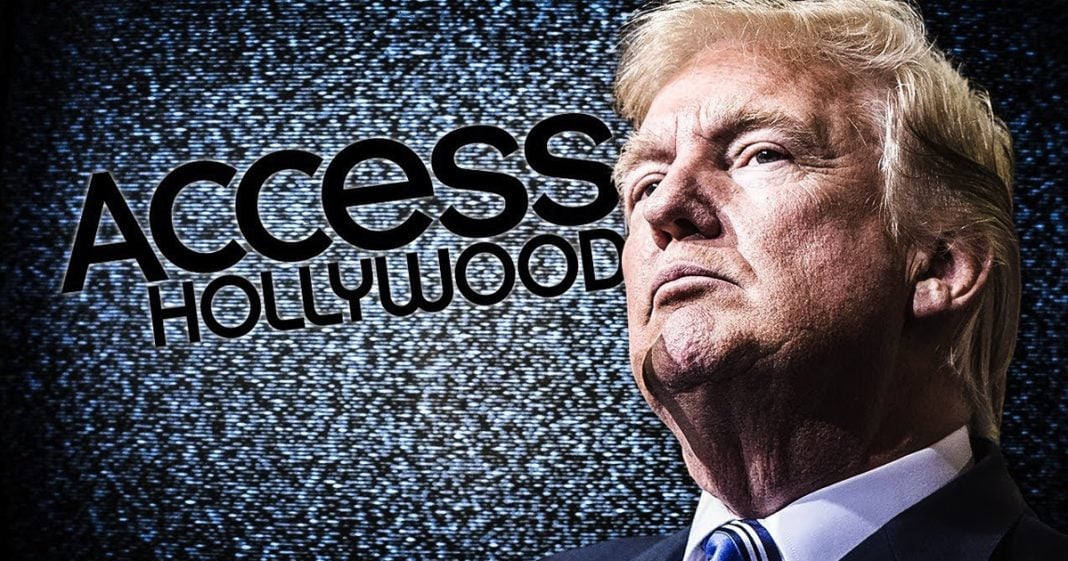 According to Donald Trump, the Access Hollywood tape that emerged shortly before the election last year where you can clearly hear Trump bragging about sexually assaulting women was a fake, and that he never said those things. In the past, Trump had no problem admitting that the tape was authentic, but now that women in this country are empowered to speak out about sexual assault, he’s suddenly trying to say that it wasn’t him. Ring of Fire’s Farron Cousins discusses this.

Donald Trump has been paying attention to what’s happened. He sees what’s happening to Roy Moore. He saw what happened to Harvey Weinstein and Kevin Spacey and John Conyers and Al Franken and he has decided that he wants to go ahead and preemptively say that he’s never done those kinds of things. Here’s where the story gets really weird. Recently, Donald Trump told people within the White House, people in Washington, D.C. that the voice on the Access Hollywood tape, the one where he talked about moved on women, would just kiss them before they even had a chance to say no, would grab them by the pussy, yeah, according to Donald Trump, that wasn’t him on the tape.

Donald Trump has told people recently and according to reports earlier this year that it actually wasn’t him on that Access Hollywood tape. He wants us to now believe that this tape that he came out and admitted to and apologized for, kind of, last year actually wasn’t him all along. It was a fake, it was a phony, it was a fraud. That wasn’t Donald Trump’s voice. That was an impersonator. With all of the people being taken down by sexual assault claims and allegations and charges here in the United States, Donald Trump doesn’t want to be one of them. Furthermore, he doesn’t want you to remember the fact that there are currently active lawsuits against him for doing just that.

If we’re going to talk about sexual predators in the United States, every conversation about it has to include the name Donald Trump. He is the president of the United States and he has been accused of doing things as bad and in some cases far worst than what some of these other people have been accused of doing, certainly far worst than anything Al Franken or John Conyers did yet that’s all Republicans want to talk about right now. Compared to people like Roy Moore and Donald Trump, Franken and Conyers is pretty tame, not giving it a free pass, it doesn’t deserve a free pass and I still believe that those men should step down from office. However, there is no equivalency between what these parties did.

Donald Trump admitted to it on tape and whether or not he wants to tell us the truth that it was him on the tape of if he wants to continue lying to us and make us believe that it was some kind of Trump impostor on that tape, it doesn’t change the fact that yes it happened. There are lawsuits about it. There is evidence coming forward. We know what this disgusting human being did. If anybody deserves to lose their job over sexual assault charges, it’s Donald Trump.