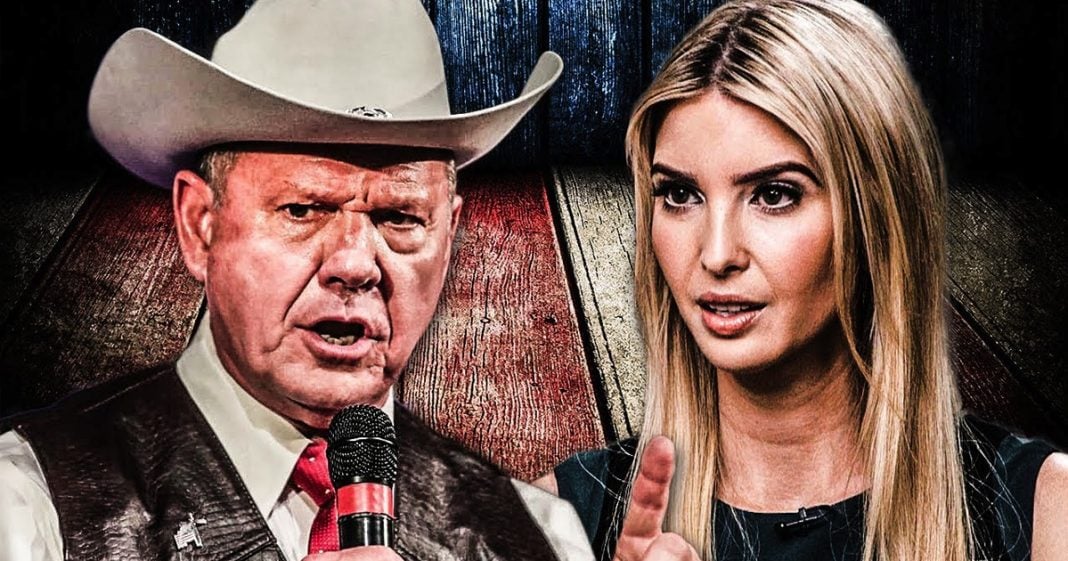 According to aides inside the White House, Donald Trump is livid that his daughter, Ivanka, had the nerve to speak out against accused pedophile Roy Moore. Trump wants his daughter to fall in line and support the disgraced Alabama Senate candidate, but sometimes even horrible people have to take a stand, as Ring of Fire’s Farron Cousins explains.

Recently, Ivanka Trump, the President’s daughter, said that there is a special place in hell for people who prey on children. Now, this was a jab from Ivanka towards Roy Moore, the former Alabama Supreme Court Chief Justice, who is now running for Senate in the State of Alabama. He’s also been accused by seven, eight or nine women at this point of inappropriate sexual or romantic relations while those women were teens and Roy Moore was in his 30s. So, Ivanka Trump rightfully, for once, came out and said, “Yeah, basically this guy is a pedophile and should burn in hell for all of eternity.”

Well, somebody didn’t like that she said this. That somebody just happens to be her father, President Donald Trump. According to a report in the New York Times, after Ivanka made this comment, Donald Trump privately to aides in the White House said, “Can you believe this?” According to the aides present, Donald Trump was more furious than my quote of him right there portrayed. He is incredibly angry that Ivanka would come out against Roy Moore.

Now, Donald Trump spent most of Sunday of this past weekend tweeting out the fact that Roy Moore, a pedophile, or accused pedophile, excuse me, would be a much better person to have in the Senate than a Democrat like Doug Jones, who made his career prosecuting members of the KKK. Donald Trump says that Doug Jones is actually weak on crime, even though he literally put criminals behind bars.

Now, Donald Trump did all of this endorsing of Roy Moore without ever actually to mention Roy Moore or use the word endorse. But we do know from this New York Times report that he was furious with Ivanka because she had enough courage to actually come out and say what the rest of the planet is also saying. That is, “Why is God’s name would you ever want to put a pedophile in the United States Senate?”

At some point, party politics has to transcend all of this. We can’t say, “Well, he’s a pedophile, but he’s a Republican, so he’s got to go in cause a Republican pedophile is still better than any Democrat.” Republicans have to wake up. You cannot continue to just carry your party’s banner regardless of who that banner is representing just because it’s your team. This isn’t football. This isn’t baseball. This is the American way of life. This is our Federal government, a government that we like to think other governments around the world look on and say, “That is a great example of a good representative democracy.” Well, at least at one point in this country it probably was. Right now, it’s been bought and paid for by special interests, but you get the point.

Republicans have to drop the act with Roy Moore. You can either be a Republican and admit that the guy’s a pedophile and probably shouldn’t serve in the U.S. Senate, or you can be a blind party loyalist like Donald Trump and say that it doesn’t matter if he raped kids, a pedophile is still better than any Democrat. One of those statements doesn’t seem quick right, does it?