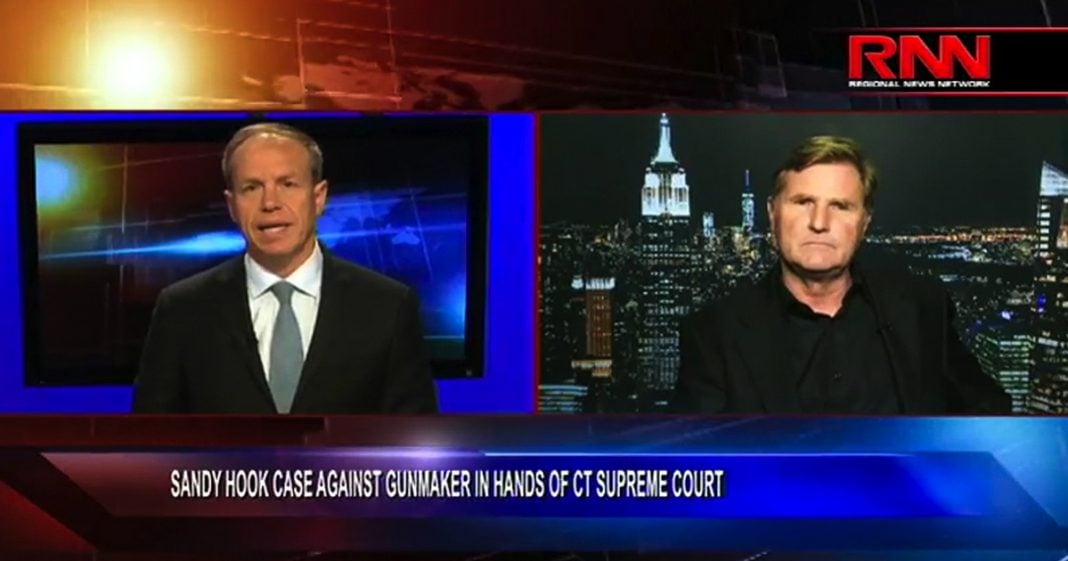 Via Richard French RNN: Richard French speaks with “Law and Vengeance” author Mike Papantonio about lawsuits against gunmakers in the aftermath of the Sandy Hook school shooting.

Richard French: Sandy Hook families against the gun maker Remington, the maker of the AR-15. It’s the rifle used to kill 20 first graders and six adults. Right now, it’s in the hands of the Connecticut Supreme Court. The suit claims the gun company negligently marketed and sold the gun that’s basically a weapon of war. Mike Papantonio, he’s a prominent, nationally known, attorney and syndicated radio talk show host as well he’s also author of a new book called, Law Inventions. Well, I sat down with him recently to discuss some big cases he’s unique insight into.

Couple items in the news, I’m curious your perspective on. In our region, there is an interesting case going on in Connecticut, the state Supreme Court, having to do with the Newtown tragedy, and more specifically, in this case, Remington. Really, any culpability or possible liability gun manufacturers might have, and as we’ve talked many times in the program, they’re shielded in a unique way unlike any other industry, but given how it’s moving along, do you think there’s any exposure, forget morally, maybe even legally here, that these gun manufacturers might have, given some of the guns, like these AR-15s that keep getting used in these mass shootings?

Mike Papantonio: This is obviously a dangerous instrumentality. I mean, it’s no difference from any other analysis for the dangerous instrumentality, but we’ve given the immunity, not for any logical reason, but because of the politics of it. If I’m looking at a new way to go into it, obviously, the Remington case is a unique case. Remington is a defective product case that gets around the idea of some of that immunity. It has to be very narrow. The type of causation issue that you’re talking about has to be very narrow. You’re going to see immunity being used more and more to shelter so many industries. I’m seeing it with the pharmaceutical industry. Some of these folks creating products that are killing hundreds of people. They understand the defect, but nevertheless they’re looking for that day when they have immunity. When you see self-driving cars that are going to hit street, we’re going to start seeing immunity there. It’s something that’s going to eat up the jury system little by little.