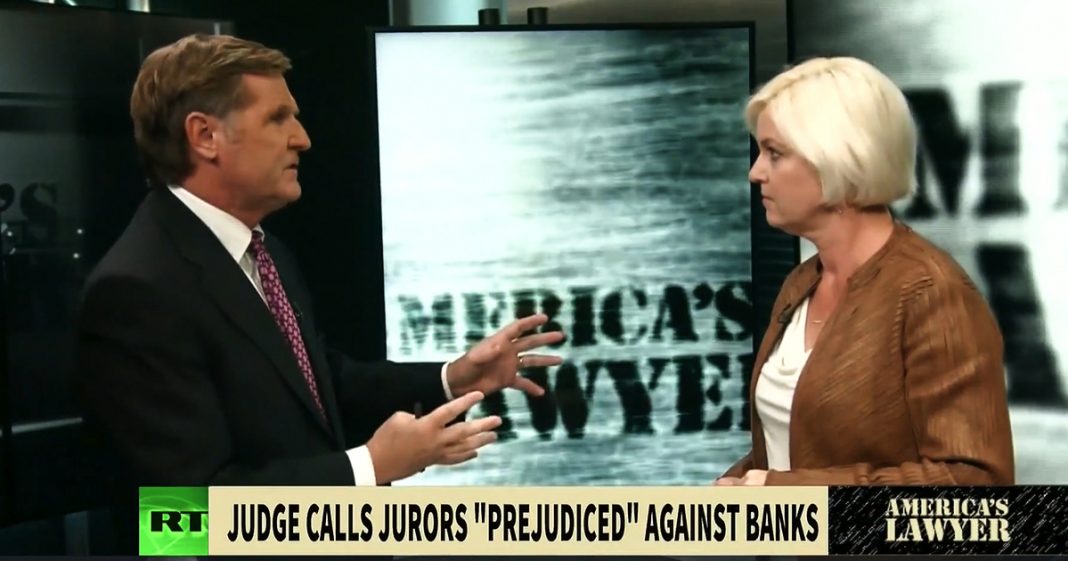 Via America’s Lawyer: Mike Papantonio is joined by Mollye Barrows, Legal Journalist for The Trial Lawyer Magazine, to talk about how a Manhattan Judge called a federal jury “prejudiced” against JP Morgan Chase & Company for holding them liable in a lawsuit.

Mike Papantonio: In Manhattan, a federal jury found JPMorgan Chase & Company liable for unlawfully retaliating against a former wealth manager. But in a very bizarre turn of events, the US district judge in that trial ripped into the jury for being prejudiced against the bank. Craziest story I’ve heard in the federal courts in a long time. Joining me now to talk about this is legal journalist for Trial Lawyer Magazine, Mollye Barrows. You know, a state judge, there would be grounds to remove that person from the bench. This is outrageous conduct. The jury comes up with a decision-

Mike Papantonio: … they’ve heard the facts. They’ve done what their role … Who in the world … How is it possibly this judge’s position to be able to judge that jury? This is an outrageous story. I got to tell you, in state court, I would move to have her removed from the bench.

Mollye Barrows: Well, it’s shocking. In her opinion, basically the story, and we’ll recap it in a second, but basically she tells the jury that a rational jury would not have to come to this decision that they came to. And the trial amounts to a he-said-she-said because you have Jennifer Sharkey, who’s the former wealth manager for JPMorgan, she says she came to them in 2009 and said, “Hey, we’re representing this diamond broker. He’s got 14 million in the bank. I suspect there may be some money laundering, some fraud going on.” She says she was fired within a day. At least within the week, she was gone. JPMorgan’s executive said, “Oh, no. We fired her for lying multiple times, for not reaching out to a client that was trying to get in touch with her,” and she said, “No, this was retaliation for whistleblowing.” So for the jury, it came down to who do you believe, and the jury believed her and the judge believed the bank executives.

Mike Papantonio: Yeah. So the judge takes it on herself to say, “I’m smarter than you idiots.”

Mike Papantonio: “You as a jury are a bunch of idiots. I’m so much smarter because I’m a federal judge.”

Mike Papantonio: I’ve been doing this 35 years. I’ve tried more cases than most 100 lawyers. I have never seen conduct like that from a judge.

Mollye Barrows: She sent them back to the drawing board. She said, “Both sides, you need to come back to me with a different settlement.” Her reason was because basically the jury awarded two amounts. It was 1.1 million total, but they awarded about half-a-million for back pay and another half-million for emotional damages. She took that as prejudiced against the bank because she ordered them not to give punitive damages. The fact that they awarded more than half-a-million for emotional damages, she felt indicated that they were prejudiced against the bank and trying to award punitive damages to spite her.

Mike Papantonio: That’s her background. Her background is she’s come up through the banking industry. She was appointed because she was a conservative, banking kinda judge. That’s why she’s in the Southern District of New York. All of a sudden, she makes the decision that she’s so much smarter than the jury-

Mike Papantonio: … that they … Of course they’re gonna make awards like that. Of course. First of all, that’s not a runaway award at all.

Mollye Barrows: No. It’s their job to listen to the facts and make a decision. I’m glad to hear you say that because it seemed like 1.1 million … they did listen to the instructions. They did come back with their verdict. They did award what they thought was right. She basically said, “I don’t like it. Do-over.”

Mike Papantonio: Has there been any type of sanction against her at all?

Mollye Barrows: Nothing so far that I have seen, and I’ll continue to follow it and watch it and see what goes on. But she’s getting a lot of criticism, basically for so verbally ripping into the jury, and it took 8-and-a-half years for this case to even get to trial.

Mike Papantonio: Would you do me a favor-

Mike Papantonio: … and make sure she gets a copy of this video so-

Mike Papantonio: … she can understand … Look, in this … Isn’t this evidence of how Wall Street is control of Congress, The White House, and now the judiciary, at least in the Southern District of New York, with this judge? I mean, isn’t that-

Mollye Barrows: … it’s certainly the big debate. Everything from lobbyists to connections behind the scenes to, as you said, her background was in banking. Who does she think she is, and as much as she’s listened to the same evidence and she’s smarter than the jury and is gonna tell them how they should think … But yeah, it’s certainly … because the other part that’s interesting about this is Sharkey, the former wealth manager that was fired, she reported these concerns that she had about the diamond broker within a few months of Bernie Madoff basically being exposed for the pyramid schemer that he is, and he was using JPMorgan bank accounts to further his fraud. So there’s some concern that the bank just wanted to get rid of her because they didn’t wanna be associated with that or maybe it was something deeper and she really was fired for exposing something. That’s the debate, so it does make you wonder how far –

Mike Papantonio: … there’s federal committees put together to try to figure out why there’s such a turn of the public against the judiciary. They might start with this case and trying to understand that.