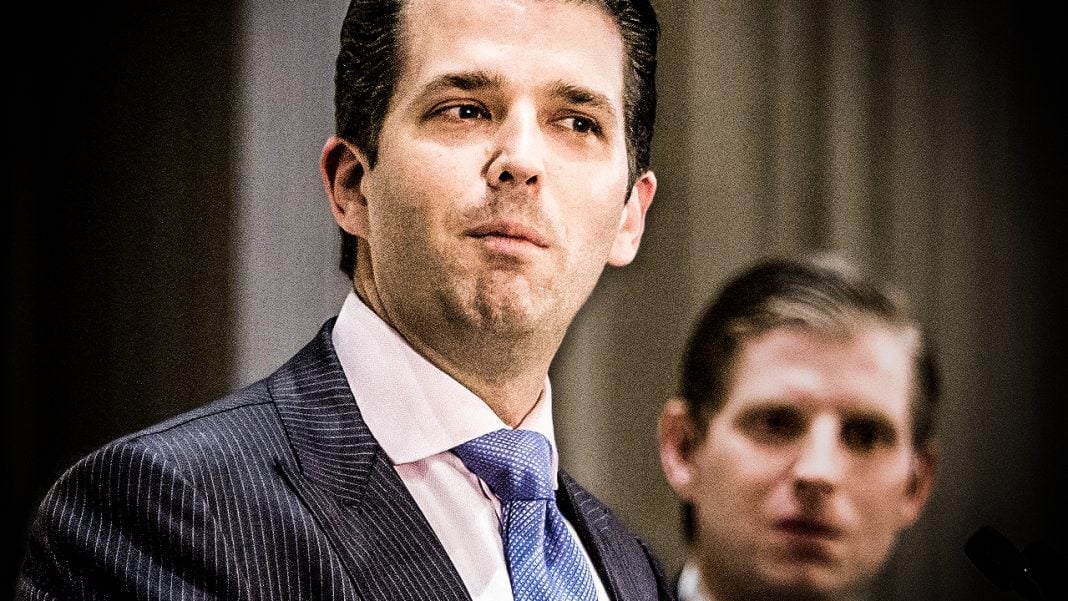 The presidential campaign of Donald Trump has decided to stop paying the legal bills of Donald Trump, Jr. But don’t worry about Junior, he’ll still have his legal bills covered by donors in the form of a legal defense fund that the campaign is setting up for Trump family members and staffers. This move is very significant, as this typically only happens when someone is positive that they will be charged with a crime, as Ring of Fire’s Farron Cousins explains.

Bad news for Donald Trump, Jr. this week. As it turns out, the Trump Campaign is no longer going to continue paying his legal bills in the ongoing investigation into the Trump Administration, Trump Campaign, and possible collusion with Russia. But don’t worry about little Junior. He’s going to be just fine, because instead of the campaign just flat out paying his legal bills, what they have now decided to do is set up a legal defense fund that’s going to cover Donald Trump, Donald Trump, Jr., Jared Kushner, all other members of the Trump family, and campaign and White House staff should they need legal assistance.

This story may seem a little trivial, but it’s really a lot more important than people realize. You see, you don’t go and set up a legal defense fund, which is what the campaign is doing, unless you’re anticipating criminal charges that need to be fought. If Donald Trump, Jr. is specifically mentioned as somebody who’s going to have access to this legal defense fund, then it’s incredibly likely that those people working behind the scenes understand that criminal charges will be filed against Donald Trump, Jr. Same goes for Kushner, and at this point, from what we know about the ongoing investigation, it’s looking like Donald Trump himself is also likely going to have to take money out of this legal defense fund to fight off obstruction of justice charges.

While creating a legal defense fund is not an admission of guilt, it is an admission that you know shit is about to get real in the White House. That is exactly how we should interpret this story. The fact that they’re going to allow staffers and everyone else to take from this pool as well shows that not only are they trying to placate these people to prevent them from rolling over on them, but they also know that yeah, some other people are going to need defenses as well.

This story is so much bigger than people realize, not just the legal defense fund story, but the entire Trump Russia investigation. Whether or not collusion is proven at this point, Mueller has certainly come up with enough evidence to put several different people behind bars for things that have absolutely nothing to do with collusion. We have obstruction of justice for both Donald Trump and Jared Kushner and Donald Trump, Jr. That’s what’s so important here. We also know now that Mueller is starting to go after Donald Trump’s personal finances, something Donald Trump told Mueller specifically, “Please don’t go look at my finances,” which again, not an admission of guilt, but probably an indication that you’ve done some pretty crazy stuff over the years that’s probably borderline illegal.

That’s where we’re at right now. Donald Trump, Jr., Jared Kushner, Donald Trump, and all the other staffers and members of the Trump family, they’re now going to have a cushy legal defense fund to pull money out of. But don’t worry. Again, not going to be their own money because people from all over the country can donate money to legal defense funds, helping to pave the way for these people to hire the best defense lawyers possible. That is, of course, if defense lawyers even want to represent the Trump family, because as we’ve learned over the last few months, many big name law firms have actually declined the opportunity to represent the Trump family in this ongoing scandal, so good luck, folks. I hope the Trump family is able to raise a ton of money because at the end of the day, all the best lawyers in this country have already told you, “Thanks, but no thanks.”