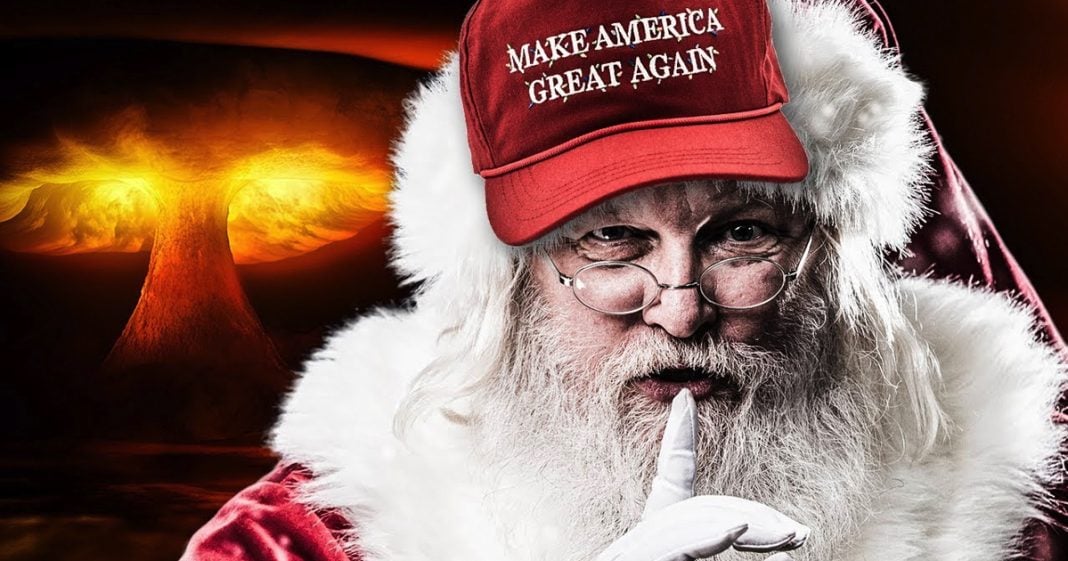 Donald Trump has found yet another way to profit off of the presidency, and his organization is now selling Christmas-themed MAGA hats. But for the yuletide version, hardcore Trump fans are going to have to shell out TWICE as much as they paid for the regular, non-holiday themed MAGA hats. Donald Trump has absolutely no shame, as Ring of Fire’s Farron Cousins points out.

Well, Thanksgiving is officially behind us at this point, so Christians all over this country now gearing up for Christmas. If you’re struggling to find a gift for that one person on your list that is almost impossible to shop for, you can go to the Donald Trump store and buy a Christmas themed Make America Great Again hat. But be careful because these MAGA hats aren’t like the regular MAGA hats because they literally cost twice as much for the same thing that just happens to also say Merry Christmas and have a fun little festive holiday design on it.

Once again, Donald Trump has found a way to profit off of his Presidency by pandering to the people in this country who think that there’s been a war on Christmas taking place for the last 20 years. Those people who actually believe that probably are stupid enough to pay twice as much for a MAGA hat that says Merry Christmas. A lot of people probably wondering why is this even news, why are we wasting our time talking about this. Because it all goes back to Donald Trump profiting off the Presidency.

He is using his office to market his brand to sell it to idiots all across this country. That is something that should not be allowed in the United Stated. Hell, remember Jimmy Carter? When he became President and had to sell his peanut farm, yet Donald Trump is using his office for the sole purpose of putting more money back in his pocket, and to be quite honest, if you’re going to sell a Christmas themed MAGA hat, why not actually make it into a Santa type hat so it looks different from the regular MAGA hats. You could probably sell a few more. Not that I’m trying to give you tips on how to sell your products but you really missed a big opportunity with that one.

My advice to anyone out there looking for a last minute Christmas gift or maybe just an early Christmas gift to go ahead and complete your list, avoid the MAGA hats. Avoid anything with Donald Trump’s name, face, picture, or likeness on it. Do not give this man anymore of your money. Do not buy into the hysteria surrounding this war on Christmas that has never truly existed, because after all, as the Bible tells us here, for the love of money is a route of all kinds of evil, and if that is the case, then I think Donald trump is probably the most evil person in this country today.