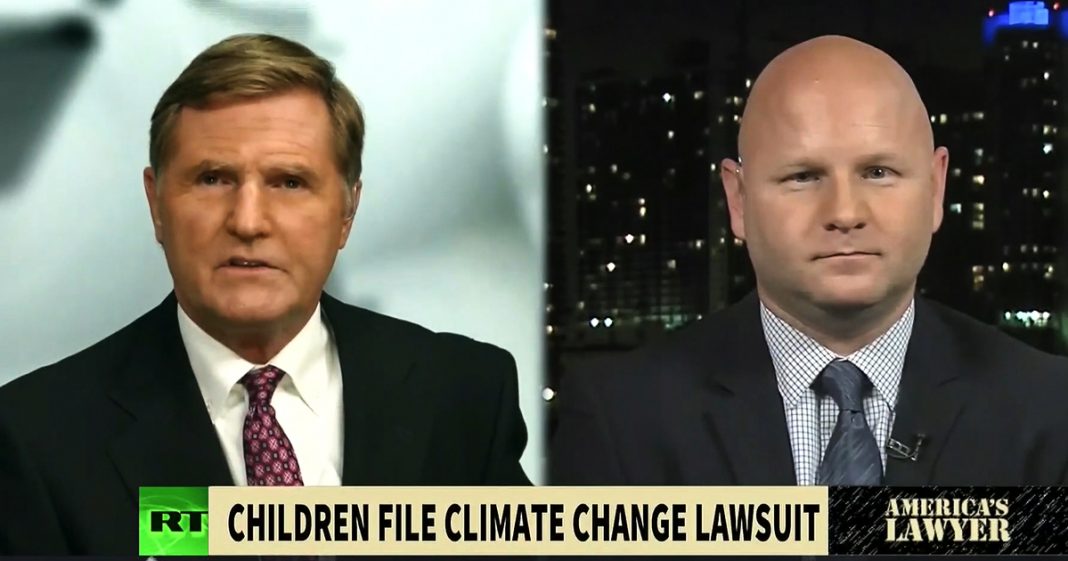 Via America’s Lawyer: Mike Papantonio and Farron Cousins talk about how a group of children filed a lawsuit against the federal government for it’s inaction on Climate Change.

Several lawsuits have been filed against the federal government to demand that they take action on the issue of climate change and enforce, just enforce, the laws that we already have on the books to protect our environment for future generations. One of these lawsuits was filed during and against the Obama administration, and the other was filed recently against the Trump administration. Both of these lawsuits were filed on behalf of children in the United States.

With the help of groups like Our Children’s Trust and the Clean Air Council, children across the United States are banding together to demand that the government actually do their job and protect our air, water and soil for future generations. In their lawsuit these children claim that the decisions to expand fossil fuel development, pull out of the Paris climate accords and approve projects like the Keystone XL pipeline are all going to contribute to the growing threat of climate change. A threat that these children will be facing head-on long after these politicians who approved these decisions have left this world.

Joining me to talk about this, these lawsuits, is Farron Cousins. He’s executive director of The Trial Lawyer magazine. Farron, start by telling us the basis for these lawsuits being filed? Who are they going after?

Farron Cousins: Right now we’ve lawsuits that are going after the former Obama administration, they’re going after president Donald Trump, Scott Pruitt the head of the EPA, and several other state governments throughout the country. They’re all saying the exact same thing. They’re saying that these typically old white men who are calling the shots, or in Obama’s case just a standard politician, doesn’t even have to be a white man in that instance. Basically, these old guys are calling the shots, allowing the environment to be raped and pillaged by corporations, doing nothing about it.

The children in this country are the ones who are going to suffer. Luckily, the children have said, “Look, we’re not going to let you destroy our future, so we’re going to hold you accountable for the Keystone XL pipeline. We’re going to hold you accountable for opening up these new coal mines that are going to add CO2 and other toxic emissions to our atmosphere.” They’re not going to take it anymore. That’s what these lawsuits are saying. Every decision that these politicians have made is going to come back and bite us in the bottom, while you will be long gone from planet Earth by the time the effects of these decisions really take hold here in the United States and across the entire planet.

But when you talk about climate change, that it has potential to kill our grandchildren, kill our entire planter, it’s like a yawn moment, where it comes to getting people to even look at the story. What is your take on that? I know you’ve seen it firsthand, we’ve talked about it before. What’s your take?

Farron Cousins: That’s exactly how it is. You know, to hit back on a point you made in the intro there, the fact that politicians will ignore climate change, they’re always going to go back to, “No, our greatest threat is radical Islamic terrorism.” In fact, in 2015 the very first Democratic debate, back when we still had I think five people on that stage, the very first question that was asked of those politicians was, “What’s the greatest threat to the national security of the United States?” All four people on that stage, with the exception of Bernie Sanders, said Islamic terrorism. Bernie Sanders said climate change.

Mike Papantonio: Right, it’s not just the baby boomer generation. Understand, these are millennials that don’t think this story is important enough to even … we know what the traffic is, we’ve got all the metrics. You can ask anybody in this business of media, do they go to these stories? The answer is no. Will they got to a story about what Kim Kardashian won some award last night. Yeah, they’ll go there. But they won’t go to a climate change story when it’s their lives and it’s the lives of their children that are involved here. Let me ask you, the first case that was filed has already made it through some impressive legal hurdles, tell us about those hurdles.

Farron Cousins: The groups involved in that suit, I should say the ones being sued in that particular instance, tried to get the case thrown out. They went to the judge and they said, “Look, this case has no merit. You cannot prove that these children and these groups representing them have any standing to hold us accountable.” The judge in that case, just a few months ago, said, “Actually, these kids do have standing. There is plenty of evidence to bring this case forward and I’m going to let it go to trial.”

The trial for that case is actually set for the beginning of February in 2018, so we’re not far off from this case actually going to trial. For the judge to come out and dismiss the claims of those being sued, by saying, “No, these children have every right to take you to court and hold you responsible,” or at the very least allow a jury to make that decision. That is probably one of the biggest steps forward on the issue of climate change that the United States has ever made.

Mike Papantonio: It’s a wise decision. There’s really absolutely … this is no different than somebody living along a river, and some company pollutes the river, and the people who live along the river get to say, “We have a claim because we’ve been affected by it.” There is no difference and the judges that threw these types of things out early on, they completely missed the point, and usually they missed the point because the early ones were very conservative judges who really didn’t want this case to go forward.

I’ll tell you who doesn’t want this case to go forward, are the Exxons and the folks that were responsible for his. If you go back and look at the early documents, they knew exactly what was going on, and there’s no difference … If they’re killing people because of those decisions, in any world that would be called manslaughter, wouldn’t it?

There’s plenty to go forward with and I would be amazed, I’d be amazed if even an appellate court says, “No, we’ve got to stop this case.” The Trump administration’s been repealing environmental regulations since their first few days in office, and corporations seemed to think this is the greatest thing ever. Well, this actually ended up being a really bad move for corporations in the long run in terms of liability, because I’ve got to tell you something, it’s just a matter of time. It is just absolutely a matter of time. What’s your take?

Farron Cousins: It really is just a matter of time for these people. Unfortunately, time is something that the CEOs of these chemical companies and the fossil fuel companies do not have. Back prior to the 1980s, the average tenure of a CEO in the United States was about 15 to 20 years. Today, it’s between three and five years, so they don’t care about the long term consequences. They don’t care about the toxic waste they’re dumping today, causing cancer in people 10 years down the road. Because they’ll be so far removed from that company that it won’t matter to them. You kick the can down the road, you let the next CEO deal with it, or even the next one after that.

You get your golden parachute, and then you go become CEO of another company. That’s how it works today, there’s no more long term liability. It’s, let everybody else deal with it. So even if the Trump administration repeals these regulations and we get more toxic waste in the water or in the air, it still creates a liability for corporations who are going to end up being sued for this when we find out it causes cancer, or pancreatitis, or kidney failure, or 100 other different deadly diseases for American citizens, because that’s always the case with what happens. Just because government says you can dump it doesn’t mean the courts are going to turn around and say, “Well, you caused cancer for this entire community, so we’re going to hold you liable to that.”

Mike Papantonio: What it’s called, to close this thing down, what it’s called is externalizing all the risks. These CEOs are moving through, they’re making their big money, they’re leaving as much garbage behind as they want, because they’re not worried about it. It almost takes a sociopath to analyze this world the way that we’ve seen these energy companies analyze this problem with climate change.

It almost has to be a total sociopath who says, “You know, I really don’t care what’s going to happen to my great-grandchildren and my children. I really don’t care.” They’re talking about their own family, “As long as I’m taken care of today.” Look, thanks for joining me Farron. This is a case that we’re certainly going to follow as it makes its way through the courts.