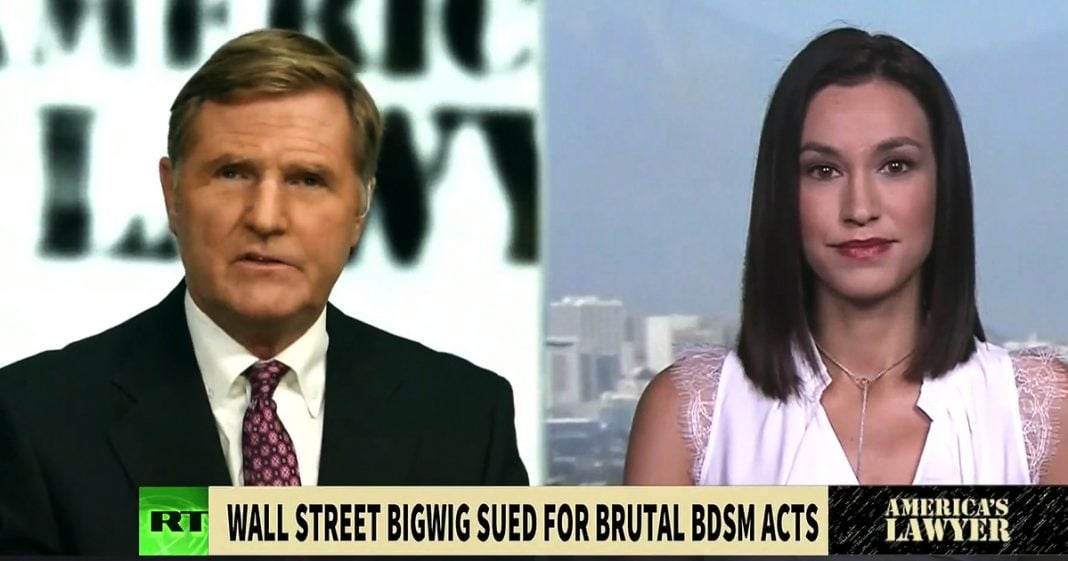 Mike Papantonio: A Wall Street multi-millionaire has a lawsuit weighing in against him claiming that he lured three female models into a brutal sex dungeon. Joining me now to talk about it is RT correspondent Brigida Santos.

Brigida Santos: So, 62-year old Howard Rubin is a Wall Street millionaire. He has worked at the George Soros Fund, and also at Bear Stearns. He is accused of beating and raping three models, and of leading an organized human trafficking ring. Now these allegations are very serious. These women allege that he had repeatedly lured them to his penthouse and to other locations under the guise of companionship, or conducting photo shoots with him, and when they arrived they say that he drugged them, gagged them, raped them, beat them, and even so badly in some cases that one of them required reconstructive surgery. Another one had broken ribs. And that he covered this up with the help of some of his associates.

Now, the plaintiffs say that he violated several laws, including the racketeer influenced and corrupt organizations act, and also the trafficking victims protection act because he created this enterprise to rule them in, abuse them, and then cover it up. And of course, he is denying all of these allegations and now countering by saying that these women are trying to extort him for money, Mike.

Mike Papantonio: Yeah, the good news here, Brigida, is that when you look at these stories, it’s always a case of, you know, if you go back in time, these women, and whether it’s the Al Franken story, whether it’s the Roy Moore story, the Harvey Weinstein, you name it. These, most of the time, the women had nobody within their circle that was giving them any kind of support. There was nobody saying, “Look, I’m here with you, you know, we’ll work through this together.” This case … But now we see that changing, now we see, you know, whether it’s, you know, a reporter in the Al Franken case, somebody who Roy Moore knew in Alabama, whether this character on Wall Street. It always turns when somebody having enough courage to come forward first.

And you know, what’s wrong with that, is it should have happened a lot, it should happen a long time ago. There should be support for these women and say, “Yes, go do this now.” But this is another classic case of a rich, powerful person thinking that he can get away with what he wants. These stories are all about non-consensual sex acts like we saw with Harvey Weinstein. Do you know the extent of Howard Rubin’s wealth and power, and how did that work to intimidate maybe these people involved?

Brigida Santos: He is one of the most well-respected men on Wall Street, and in fact, his deals have been featured in The Big Short. He has also boosted Bear Stearns’ sales by $295 billion, so he’s a very powerful man. And in fact, in this case, you said that people were not on these women’s side, it’s even worse than that, because two female fixers were pretending to be on the side of these women by finding them on Instagram and sending them messages saying that he was a very nice man, and if they ever felt uncomfortable, that they would still be allowed to be paid for those photo shoots, and they could leave at any time. But in the case, this did not happen, and he also intimidated these women by allegedly hiring somebody to hack into all of their social media accounts, to change their passwords, their billing information, and even tamper with some evidence so that he could force them to settle and change it so that they could not file criminal actions against him, Mike, so these are very serious allegations.

Mike Papantonio: The problem is, this doesn’t stop simply by people having to pay money. This character can pay as much money as he needs to pay. It stops when they’re prosecuted. It stops when they have to go to prison, and that’s the only thing that stops this idea that they’re above the law, that somehow their wealth and their affluence, and their influence, puts them in a class of their own and they can do with what they want.

But there’s another side to this. The other side is the holier-than-thou types. We’re seeing them in Washington all over the place right now. Giving speeches about how wrong sexual harassment is. Again, I come back to the Al Franken story. He’s news right now for sexual harassment too. I mean, what’s this story about? Isn’t this another situation where “I’m Al Franken and I have this big name, and I have this power and therefore I can do what I want to do.” This is an ugly story. What’s your take on that story?

Brigida Santos: Al Franken, of course, is the Democratic Senator from Minnesota, he has been accused by a female reporter, Leeann Tweeden, of sexually assaulting her in 2006 by kissing her without her permission and sticking his tongue in her mouth, and then taking a photo of himself groping her while she was asleep. And that photo has been made public. And I want to mention that this incident happened two years before he joined the Senate, when he was still an actor. It was while they were on a USO celebrity tour in the Middle East. They were in a play together, they were supposed to be rehearsing a scene in which he does kiss her, but she said that they did not need to rehearse that kiss and he decided to kiss her anyway without her permission.

Now, Franken has come out and apologized. He said that he regrets taking this photo, and that he did do it.

Mike Papantonio: Yeah. Look, Howard Rubin’s attorney is also being accused of covering up Howard’s sex dungeon penthouse. How is she being roped into this, and what’s the story behind those allegations? That’s very serious. Very serious.

Brigida Santos: Yes, it is.

Mike Papantonio: … for the attorney to affirmatively get involved in that. What’s your take?

Brigida Santos: Yes, so Lifat Schnur is a former Brooklyn Prosecutor, and he was hired as Rubin’s attorney. Now he’s the one who drafted up these Non Disclosure Agreements for the models to sign, prior to the models ever meeting Rubin, so they did not know what they were getting into, and once they met with him, Rubin then worked with Schnur, the attorney, to try and cover this all up. And in fact, Schnur has also been accused of obstructing justice, of intimidating the witness, and even getting involved in another criminal case involving one of these models. He somehow was able to get himself as her lawyer, which is obviously a conflict of interest, Mike.

Mike Papantonio: Yeah, I mean there’s some lines a lawyer should not cross. One is to get involved in the cover up, one is to get involved in the process of victimizing these people a second time. So you know, hopefully when this is all over, they don’t just pay out money, really what needs to happen here, in order to change things. What needs to happen, is they probably need to share a cell somewhere. And then the next time somebody thinks that maybe they’re so powerful, maybe their political position makes them so important. Maybe they have so much money that they think they’re above the law, they’ll think, “Well you know what, Howard ended up in prison.” Or some of these other people that have been called out, they end up with something more than having to pay fines. That’s really what it’s going to take to change this culture.

Brigida, thanks for joining me.