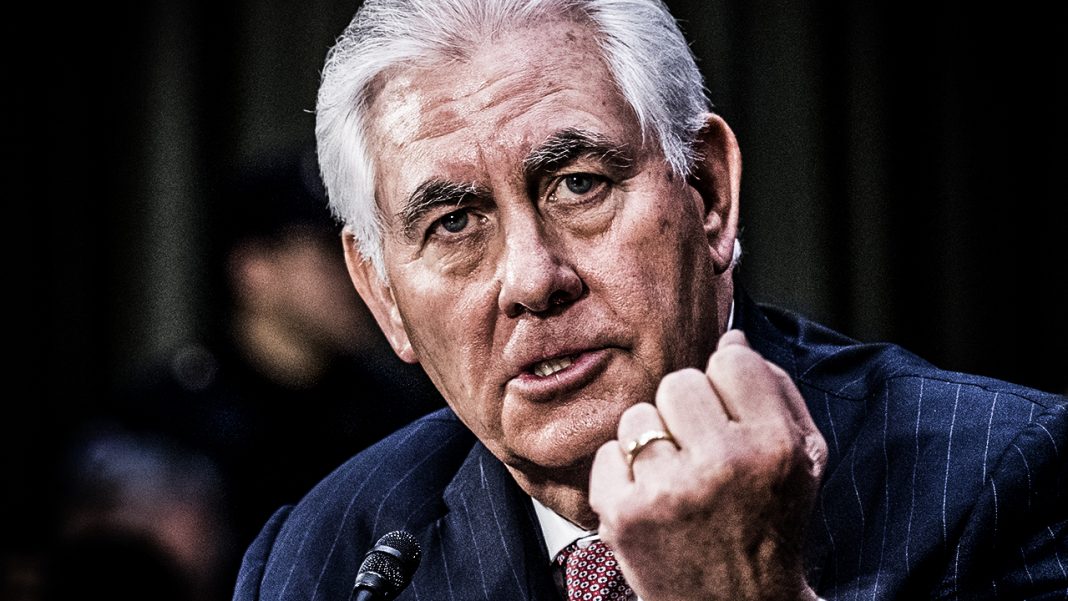 According to a dozen State Department employees, Secretary of State Rex Tillerson has broken the law by refusing to list countries like Iraq as using child soldiers, in spite of the fact that the State Department has acknowledged that the country is using child soldiers. This could spell the end of Rex Tillerson’s government career, but more importantly, it speaks volumes to the conduct of the United States war machine as Ring of Fire’s Farron Cousins points out.

According to an official memo sent out by at least a dozen employees of the United States State Department, Secretary of State Rex Tillerson has broken the law that was passed to protect child soldiers throughout the world, specifically the fact that the United States would not offer any military aid to any country that was using soldiers under the age of 18.

How did Rex Tillerson do this? Well, according to the employees who have spoken out against him allegedly breaking this law, Tillerson decided to not mark the countries Iraq, Myanmar, and Afghanistan as countries that use child soldiers, and therefore they are able to get US military aid. However, the State Department itself, through its own reports and its own studies, has admitted that Iraq, Myanmar, and Afghanistan all use child soldiers, so Rex Tillerson’s decision, according to these employees, breaks the law saying the United States will not offer military aid to any country that supports, or recruits, or uses child soldiers.

Here’s why this is important. Apparently at the US State Department, the use of child soldiers doesn’t matter. We don’t care what another country does. We don’t care what kind of war crimes they commit, as long as we’re able to go in, feed our need for endless war, boost the profits of military contractors. We’re going to do whatever we have to do to sweep the truth under the rug so that other people get richer and we can send soldiers to go over there and fight wars that have no purpose whatsoever. That’s what’s happening here. Looking the other way on the child soldier issue doesn’t make it go away. It doesn’t mean that the problem’s not there. It just means that we’re making it worse by going over there, sending our military, killing more people, forcing those places to then go out and recruit, and kidnap, and force into the military other children. We’re making the problem worse, just like the United States military has done in recent years in so many other countries, especially in the Middle East.

Rex Tillerson broke the law here, and that’s what these 12 employees are trying to tell us. If it turns out that, yes, he did break the law, we can prove that, it would hold up in a court, then it is past time for Rex Tillerson to go, and I do not believe that Donald Trump, given the friction that has happened between him and Rex Tillerson, I don’t believe that Donald Trump would let this man serve in this capacity any longer.

With any hope, Rex Tillerson will be out of office by Christmas this year. This was a man who absolutely came into this job with no qualifications whatsoever. He was the CEO of an oil company, given one of the most powerful positions in the United States for absolutely no reason other than the fact that he had a lot of money and Donald Trump likes people with money. This is the kind of policy that results from that. You get a guy that doesn’t know what the hell he’s doing, decides he wants to look the other way when countries use child soldiers, and now he finds himself on the wrong side of the law. Again, hopefully this guy is out of office by Christmas, and maybe with a little luck, by Valentine’s Day, he might even be in prison.