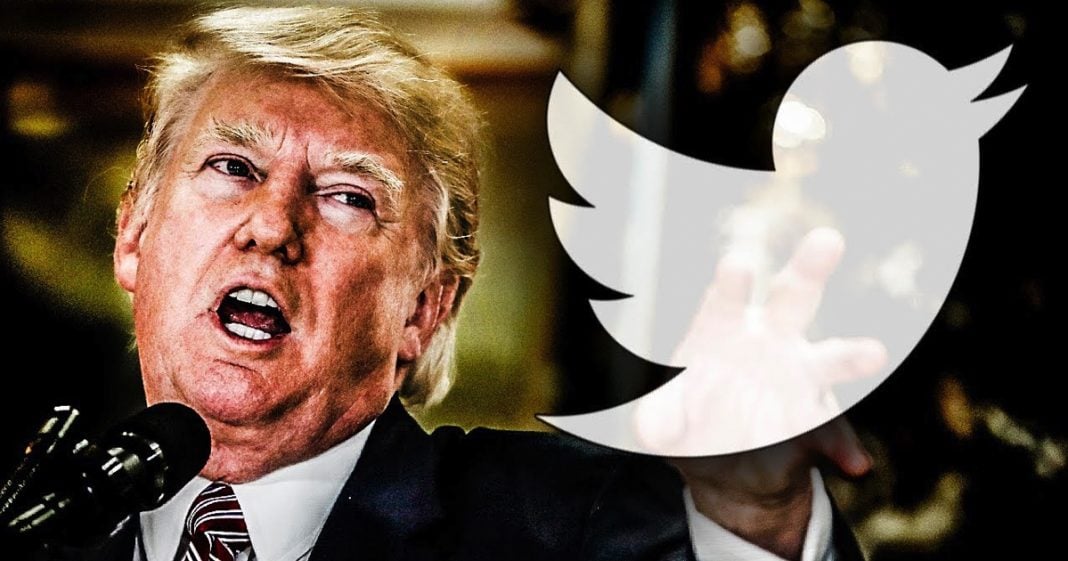 Donald Trump really likes to attack people of color on Twitter, and those tweets are starting to cost him support among his followers. However, the more interesting part of the story is that no one on his staff is even trying to reign him in anymore, as Ring of Fire’s Farron Cousins explains.

Recently, it has been pointed out that a lot of the feuds that Donald Trump likes to pick on Twitter happen to be with people of color. Earlier this week, we saw him go after Seattle Seahawks player, Marshawn Lynch. Oh, excuse me. He’s not even with Seattle anymore. But anyway, NFL player, Marshawn Lynch, because he sat down during the US national anthem and so Donald Trump called for Marshawn Lynch to be either removed from the NFL, or suspended, or fined, or even put in jail. Then if we look back just a few days before that, Donald Trump was attacking the father of a college basketball player who also happened to black. He also went after Representative Wilson on Twitter, who happens to be black. There’s a pattern emerging that a lot of people in this country have noticed.

Now, Donald Trump is no stranger to attacking many people on Twitter of all races, religions, and everything, but it’s the ones that he truly tries to harp on repeatedly, they always happen to be black. Why? Well, the short answer, the easiest answer, and the most obvious is that Donald Trump is inherently racist no matter what he tells us to the contrary.

But it also tells us something else and this isn’t just about Donald Trump. It tells us that his staff, John Kelly, the chief of staff, who’s supposed to be the voice of reason in the Trump administration, it tells us that they’ve given up. Nobody is reining in Donald Trump on Twitter anymore and that’s what a recent story in The Week was trying to tell us. Nobody is looking over Donald Trump’s shoulder. Nobody is trying to tell him that he’s starting feuds that he can’t possibly win or that it’s giving his administration bad optics by picking so many fights for so long against so many people of color. They don’t care anymore.

Is it because they think Donald Trump won’t be in office for much longer once this special prosecutor investigation goes a little further? Or is it because they, too, hold these views? Either way, there could be somebody, anybody within that Trump administration to have the guts and courage to walk up to the President and say, “What you’re doing is wrong. It’s obvious why you’re doing this. Could you just put the Twitter down for half a day? A day maybe? Make the whole country happy for a little bit? Not give red meat to the opposition who is just waiting to attack you?” Either Trump’s staffers aren’t smart enough to think like that or they don’t have the courage.

But either way, my advice to those people is go ahead and stand up to him. What’s the worst he could do? Fire you? Yeah. Being without a job sucks, but I’m sure you can probably find work somewhere else. Not to mention the fact that you could probably go work for somebody who’s probably not going to end up in prison, as Donald Trump is very likely to do. At this point, you have nothing to lose. Stand up to the man. Go tell him what you think. Go tell him that he’s making bad decisions. Because at the end of the day, it’s people like that, people with the courage to stand up who are going to be the ones to actually affect change in the United States.