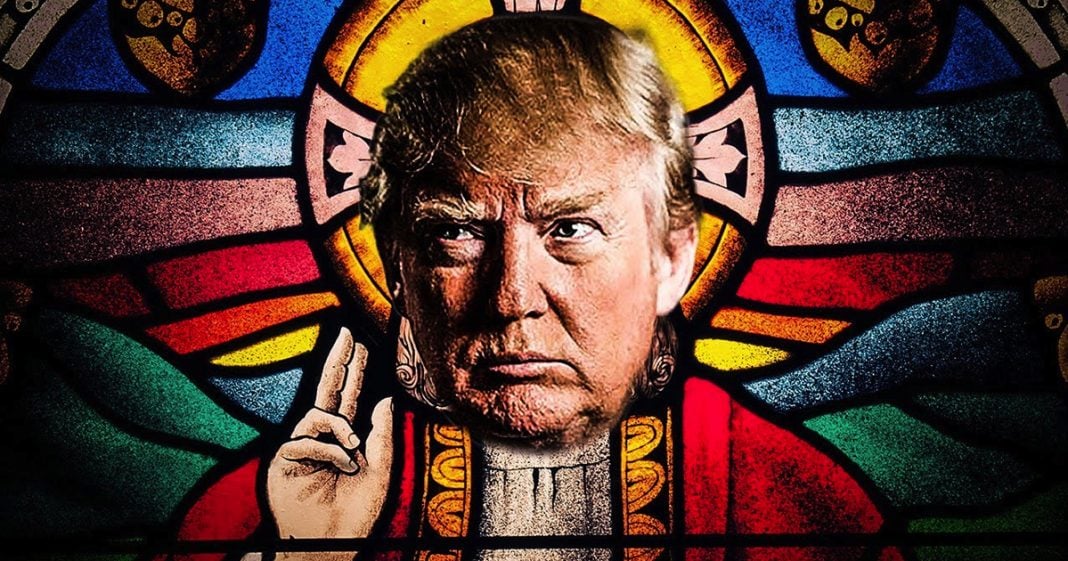 During a recent CNN panel consisting of Donald Trump supporters, one of the more ardent fans of the President said that even if Jesus Christ told him that Trump colluded with the Russians, he’d still take Trump’s word that he didn’t. This is the kind of delusion that we’re up against, when people deny all forms of reality in order to blindly support the President. Ring of Fire’s Farron Cousins discusses this.

Recently CNN decided to have another one of their little panels where they pulled in a bunch of Donald Trump supporters. This time they pulled in six people and they asked them what it would actually take for them to believe that Donald Trump colluded with Russia during the 2016 campaign, and one of the people on that panel, Mark Lee, said it best. He said, “Even if there was evidence that Donald Trump colluded with the Russians during the 2016 campaign, even if Jesus Christ himself came down and said that it happened, I would still take Trump’s word for it.”

Right now in the United States a Trump supporter, an average typical day workaday Trump supporter will always take the word of Donald Trump even, in his own words, over the word of Jesus Christ himself. Now, I don’t care if you’re a religious person or not. The fact that a Trump voter says that if Jesus Christ emerged from the clouds and came down and said, “Hey, I don’t know who you are, but anyway, I’ve got all this information about how Donald Trump colluded with the Russians.” That guy is still going to look at him and say, “You know what? No thanks. I believe that he didn’t do it because he says he didn’t do it.”

Now over the years doing this we’ve seen levels of stupidity that I really thought this country would never hit, really hope we wouldn’t. But this particular statement from this Donald Trump supporter on CNN absolutely takes the cake of one of the dumbest most closed-minded things I think I’ve ever heard in my entire life.

We are dealing with an opposition side here that doesn’t accept reality. We are dealing with an opposing side that refuses to accept reality and readily admit that they will not accept reality. At that point in those instances what do you do? How do you fight back against that? When somebody admits that there’s no level of rational argument, there’s no level of evidence, there is no level of anything in this world that would make them stop believing what they believe, the short answer is you don’t. You cannot change those people’s minds.

Your best bet is to work with people who are a little more pliable, a little more open minded, people who do understand that evidence is evidence of wrongdoing. But the people like this guy, Mark Lee, who said that even if Jesus descended from the heavens to hand over the intelligence himself I wouldn’t believe him, people like that unfortunately have to be written off. Don’t waste your time trying to argue with these people. Don’t waste your time trying to talk any sense into them. It’s not going to happen.