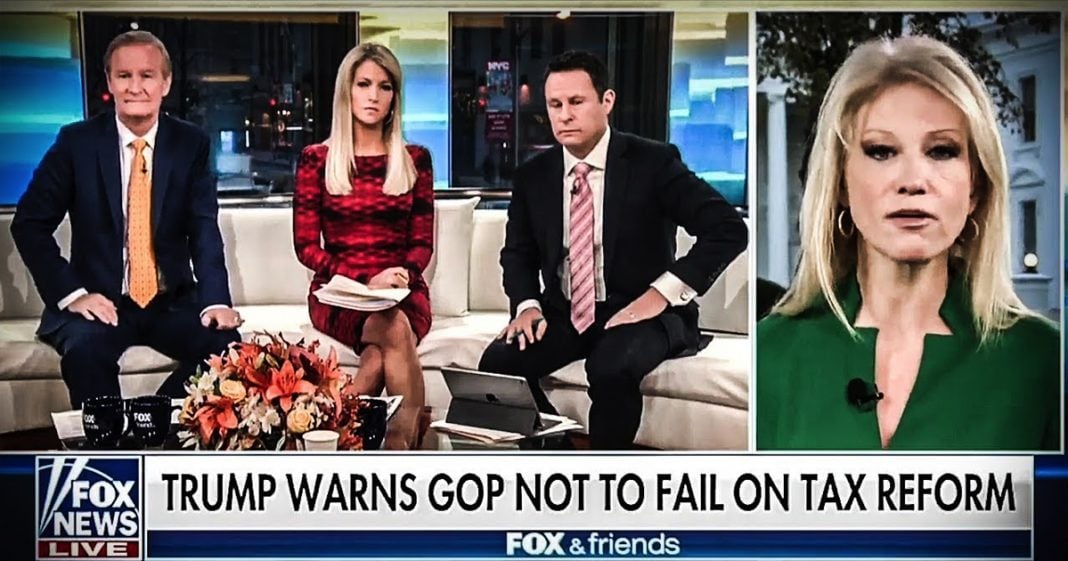 During a recent interview on Fox & Friends, White House Counselor Kellyanne Conway admitted that the President refuses to denounce the predatory, pedophile-like behavior of Alabama Senate candidate Roy Moore because he needs Moore’s vote in the Senate to pass his tax reform package. Apparently tax cuts for the wealthy trump sexual predation, as Ring of Fire’s Farron Cousins points out.

For those of you who’ve been paying attention, you should know by now that Donald Trump has been eerily silent about the entire Roy Moore pedophile fiasco going on down in the state of Alabama. Well, as it turns out, Kellyanne Conway went on Fox and Friends recently to explain why the President doesn’t want to weigh in on the fact that the Republicans senate candidate has been accused by several women of attempt to date them while they were in their teens and he was in their 30s. According to Kellyanne Conway, the reason Donald Trump is being so quiet is because we need the votes.

Kellyanne Conway: They’re going to say, “But I didn’t do it because of XYZ,” when we know is for petty partisan political reasons. And Doug Jones in Alabama, folks don’t be fooled. He’ll be a vote against tax cuts. He’s weak on crime, weak on borders. He’s strong on raising your taxes. He’s terrible for property owners.

Kellyanne Conway: And Doug Jones is a doctrinaire liberal, which is why he’s not saying anything and why the media are trying to boost him.

Kellyanne Conway: I’m telling you, we want the votes in the Senate, to get this tax bill through. And if the media were really concerned about all these allegations and that what this was truly about, and the Democrats, Al Franken would be on the ash heap of bygone half-funny comedians. He wouldn’t be here in Capitol Hill. He still has his job. What’s Bob Menedez doing back here? That’s the best my state of New Jersey can do? Huh Doocey? You live there.

Kellyanne Conway: Let me tell you something, this guy Doug Jones is a doctrinaire liberal.

Ainsley Earhardt: And a lot of women.

Kellyanne Conway: Right. And you know what, I just want everybody to know Doug Jones. Nobody ever says his name.

What she’s saying is that Donald Trump doesn’t want to screw up the campaign because they need Roy Moore’s vote in the senate in order to pass his disastrous tax-cut package that’s going to hand everything over to wealthy elite.

Basically, to boil this down to its most basic components here, Kellyanne Conway, White House counselor, says that the President won’t speak out against potential pedophilia because he wants to give wealthy people, like himself, a tax cut. That is 100% what all of this is all about. That is why the President will not attack Roy Moore. This is why he will not go after this man’s ethics. To be honest, I’m sure a large part of it also has to do with the fact that Donald Trump has been accused by 16 women of improper sexual advances, sexual harassment and in some cases actual sexual assault. Getting involved in the Roy Moore thing is probably going to bring those issues back up to the surface. However, that has not stopped the President from weighing in on Al Franken, calling him Al Frankenstein and attacking him for the women who are now coming out against Al Franken.

The bottom line is this: In Republican world, pedophilia is totally cool. Being a hypocrite is perfectly fine. As long as you’re willing to go to bat and give wealthy American citizens everything they want, Republicans will overlook any of your past sins. That is exactly what Kellyanne Conway was describing to Fox and Friends earlier this week during her appearance. That is why Donald Trump will not speak out against Roy Moore.