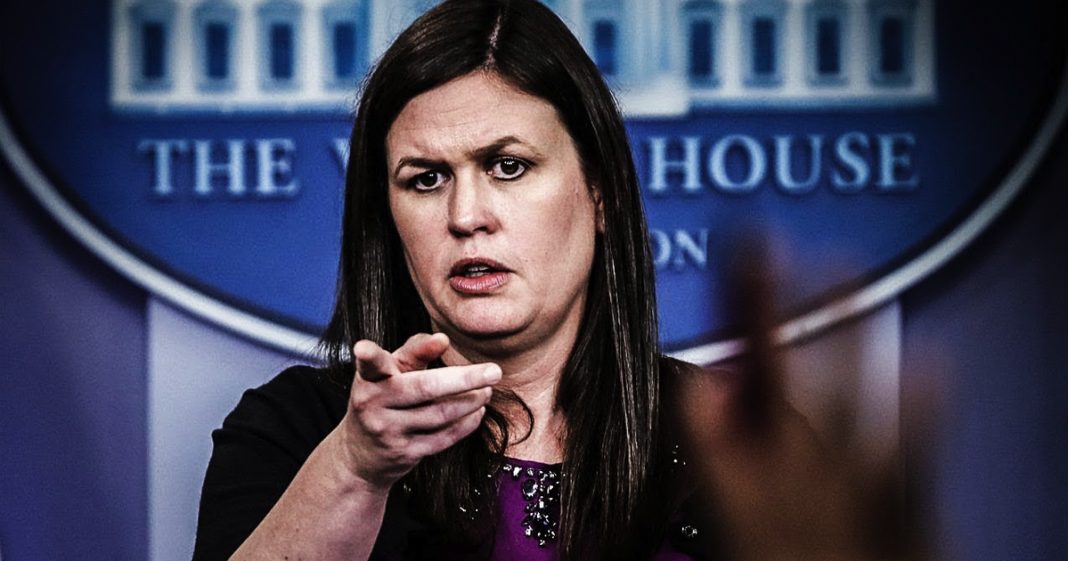 During a truly bizarre White House press briefing on Monday, Press Secretary Sarah Huckabee Sanders made reporters say what they were thankful for before they were allowed to ask a question. Not only was this incredibly juvenile, but it completely undermines the purpose of these briefings, as Ring of Fire’s Farron Cousins explains.

On Monday, White House Press Secretary, Sarah Huckabee-Sanders, held the Administration’s last White House press briefing before the Thanksgiving holiday. So, just like any Kindergarten teacher would do, Sarah Huckabee-Sanders decided to open the press briefing by having reporters say what they’re thankful for, before they’re even allowed to ask a question. Take a look.

Sarah Huckabee Sanders: I’m thankful for the police, the firemen and first responders who keep us safe here at home. And I’m certainly thankful for the incredible privilege of serving this President and the American people. So, this is how it’s gonna work today. Since I’m here and I get to call on you, if you want to ask a question, I think it’s only fair since I’ve shared what I’m thankful for, that you start off with what you’re thankful for. So anybody want to be first on what they’re thankful for?

You cannot treat these reporters, no matter how much you hate them, as if they were children. The real child in this situation is sitting in the Oval Office making decisions that are going to help destroy this country. You, Sarah Huckabee-Sanders, need to know better. I get it’s Thanksgiving and it’s a common theme of “what are you thankful for?” But you know what those reporters are thankful for? One of them said it best, they’re thankful for the First Amendment. They’re thankful for Robert Mueller doing his job and they’re thankful that Donald Trump hasn’t fired him yet and that there’s enough people with sense in Washington DC keeping him from doing that.

They’re thankful for the 25th Amendment. They’re thankful that they probably won’t have to put up with you for a full four years as the White House Press Secretary. Those are just a few things off the top of my head that I’m guessing those reporters in that room are thankful for. But they’re also thankful for the fact that Shawn Spicer is no longer there to yell at them every day and they have someone like you who kind of shrouds her criticism and her negativity towards the press in cute folksy little, you know, axioms. That’s what those people in that room are thankful for.