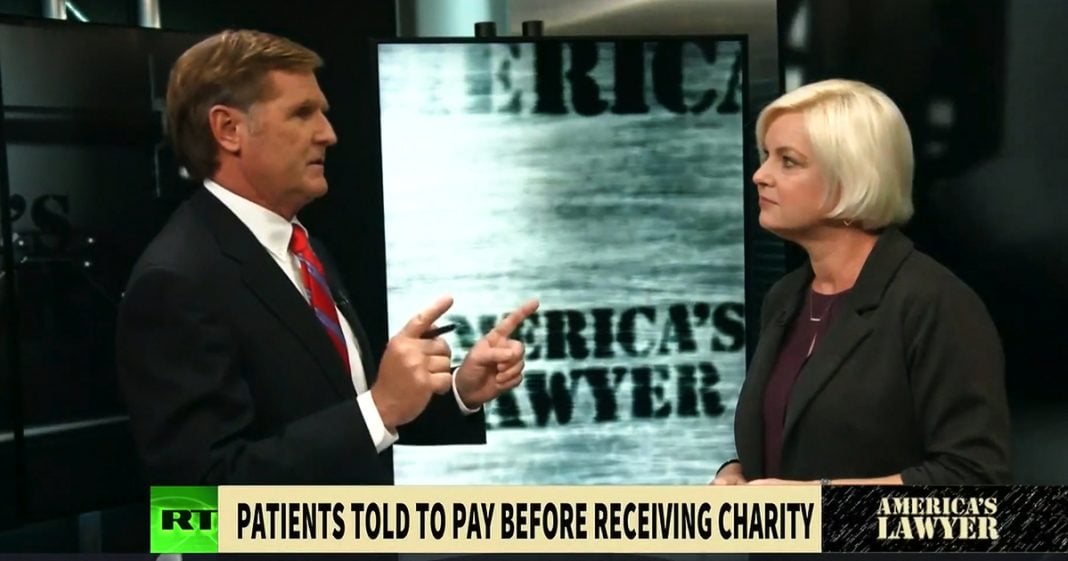 Via America’s Lawyer: Mike Papantonio is joined by Mollye Barrows of the Trial Lawyer Magazine to talk about how Washington State hospitals violated Washington’s Consumer Protection Act by withholding charity care from tens of thousands of low-income patients since at least 2012.

Mike Papantonio: Hospitals in Washington state are accused of withholding charity care from low income patients. Former employees at some of these hospitals say they were trained to always collect money before offering a charity care application, and for that, a lawsuit’s been filed against the hospitals. Joining me to talk about that is legal journalist for Trial Lawyer Magazine, Mollye Barrows. Mollye, which hospitals at this point, now this is a very active attorney general out there. He’s really all over these kinds of problems. Which hospitals are being accused of this?

Mollye Barrows: Well, there are two. One in Tacoma, that is St. Joseph’s Medical Center, and one in Olympia, which is called Capital Medical Center, and I believe that’s the one that’s for profit. The other one is a not-for-profit, although I need to double check that. But basically, you have two hospitals and they required, that have been the target of this lawsuit. And all hospitals in the state of Washington are required to provide care for people at or near the federal poverty level. And what they’re being accused of is not only not giving them the care that they have a right to access, but essentially denying them that care by making it hard for them to apply, denying them an application without a payment up front, threatening to take away their medical appointments, threatening not to do surgeries if they don’t pay up front, or even telling them, “You can’t apply for charity care until you give us a payment.”

Mike Papantonio: Okay. There’s certain breaks that hospitals get. The trade is you take care of this charity care and we’re gonna give you A, B, C and D. It has to do with all types of infrastructure. But let’s assume that neither one of these are not-for-profit. Let’s look at that. I mean, the not-for-profit scam is bad enough. A not-for-profit, you have a hospital that at the end of the year may have 50 million dollars in the bank, and they say, “Well we have to be not-for-profit,” so they take that 50 million and they buy another hospital or they buy another piece of property. It is the biggest scam in the medical profession. But this scam right here, I mean here these people are told, the workers at the hospital, “Make sure you get something from everybody, no matter how poor they are, no matter how badly they need the care.” Talk about that if you would.

Mollye Barrows: Yes, and that’s coming from higher up, so again, you have a situation where the employees are boots on the ground, the ones that are being asked to implement these illegal policies and treat people illegally, but it’s coming from higher ups. And according to the lawsuit, there was an executive who said during a hospital meeting that they basically needed to get everything they could from every person. That nobody was allowed to leave without paying anything, and that’s essentially what they were doing. According to their own state law. And that’s what he’s going after for them for. He said that they have violated the consumer protection act.

They’re supposed to notify in writing, as well as verbally, “Hey you look like you might could use some help,” or, “It looks to me, judging by your application, or some other indicators, that you might not be able to afford the care that you want.” They’re not doing any of that. They’re basically saying, “Hey, if you want to make your appointment, if you want to get this surgery, then you’re gonna have to pay up front, whether it’s hundreds of dollars or a nominal fee.” But they’re basically following that policy of, you can’t leave without paying something.

Mollye Barrows: Well, and you nailed it when you talked about the money part of it. According to the same lawsuit, over a four year period, by comparable standards of what other hospitals, the kind of charity care they were providing, these hospitals were 40% below of what they normally gave, with a savings, if you will, of 70 million dollars.

Mike Papantonio: Mollye, thanks for joining me, okay.