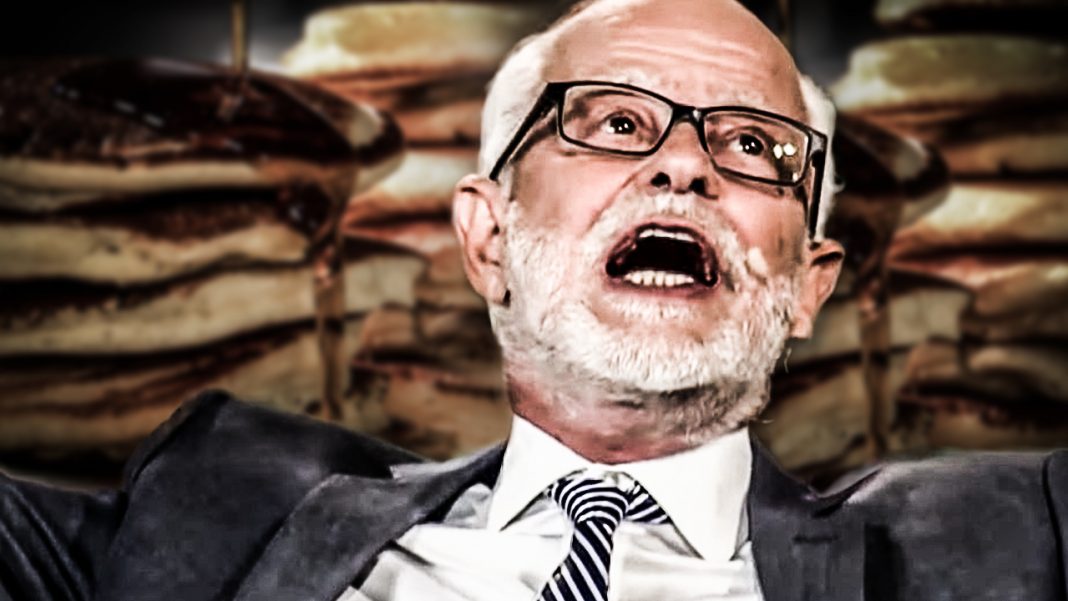 Disgraced televangelist Jim Bakker told his audience recently that if they don’t buy his $60 pancake mix, they will likely be facing eternal damnation. His reasoning for this statement is quite impressive and it probably resulted in more than a few petrified conservatives calling in to order his latest scam products. Ring of Fire’s Farron Cousins discusses this.

Disgraced televangelist Jim Bakker believes, he told his audience recently, that if you do not buy his pancake mix, then you, your children and your grandchildren will be facing eternal damnation. How did he get to that? How did he get from buy my pancake mix or suffer eternal damnation? It’s a long and winding road, so let me explain it to you using the actual words that Jim Bakker said.

He started off in a really weird fashion. He said, “You know, if they kill our president or they destroy him or whatever, if we elect the other side, they’ve come out against God.” Before we go any further, I think it’s interesting to point out, I don’t know of any Democrat in this country whatsoever that’s ever specifically come out against God. I don’t think we’ve ever had a politician that says, yeah, I’m anti-God.

Jim Bakker, ever the con man, understands that his audience isn’t very bright, so he uses that argument because he knows they’ll eat it up. He then continued, “I think maybe Trump is here to give us time to get ready because all hell is going to break loose.” Again, all hell is currently breaking loose under Donald Trump and he gave us no time to get ready for that, whatsoever.

Bakker continues, “We’re not going to have the anti-Christ to show up to get the sign of the mark of our beast on our forehead, it won’t happen without hunger.” All right, he’s starting to connect the dots between pancake mix, Donald Trump, the beast and the mark. It’s troubling, but stay with me, folks. I promise we’re going to land in here. He finally says, “Hunger is going to be the main thing. You don’t get it, most people don’t want to get it, but that’s why I’m so obsessed with you all being prepared.”

There you have it, folks, Jim Bakker explains to us that if something happens to Donald Trump, then a Democrat is going to get elected. Because they’re anti-God, it’s going to usher in the anti-Christ, and the anti-Christ is immediately going to destroy all our food, unless you have this holy pancake mix from Jim Bakker, in which case, you can watch as all your neighbors and friends suffer eternal hell fire while you’re just flipping flapjacks at your house, happy that you bought into whatever Jim Bakker happens to be selling.

Did I point out that this bucket of pancake mix is also $60 plus shipping and handling? That is insane. Jim Bakker is a guy that went to prison for fraud and, yet, people still listen to him and think that he’s being honest? He’s selling you flour and sugar and baking soda in a bucket for $60, and telling you that if you don’t buy it, you’re going to hell, you’re going to suffer for all of eternity because this jackass just wants more of your money.

You can go to the store, I don’t know if Bisquick is going to prevent the anti-Christ from coming down here in America, but you know what? I’m going to go ahead and take my chances with that, because I’m not going to pay $60 for some fraud who’s been accused of also molesting women. I’m not going to buy a $60 bucket of crap from him in the off chance that it saves me from the anti-Christ. I think, personally, I would rather burn in eternal hell fire than ever take advice from Jim Bakker.