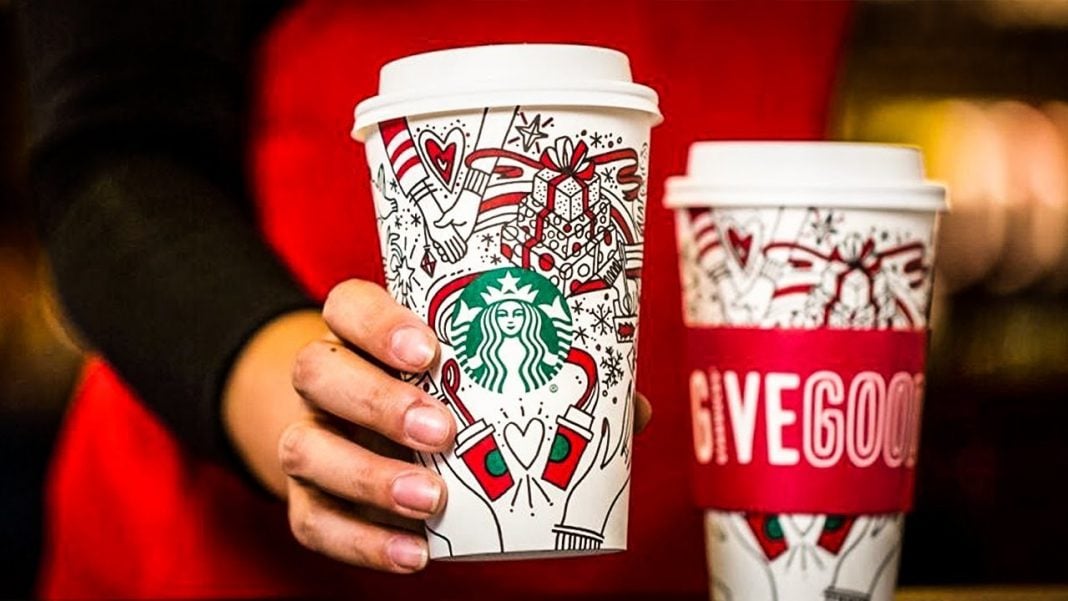 Conservatives, for the second time in the last week, are fuming over coffee. This time it involves Starbucks’ latest holiday cup that they claim features two women holding hands, and therefore is being used to promote “the gay agenda.” Is there anything that these lunatics don’t get offended by? Ring of Fire’s Farron Cousins discusses this.

And how do we know it’s war on Christmas time? Well, because Starbucks has released their new holiday cup, which apparently is promoting the gay agenda, or at least that’s what conservatives are saying.

For the second time in one week, conservative snowflakes have once again been triggered by coffee. According to a report on Fox News, this new Starbucks holiday cup has two hands coming off the top, holding hands, each one wearing a different sweater, so you tell it’s not the same person.

These hands are androgynous. There’s no male-female characteristics that you would consider, really. It’s just two blank hands holding hands.

Yet conservatives are freaking out because in their twisted little minds, these are two lesbians holding hands. And somehow, two lesbians that you can’t even see, holding hands on a coffee cup, is promoting the gay agenda.

Now, I really wish I had a better punch line for this, but this is the sad state of reality in which we live today. Conservatives are so just friggin nutty, that they’re angry about two hands holding hands on a coffee cup, at a place where you’re not even required to shop.

If you don’t like Starbucks, don’t go to Starbucks, but don’t claim that two hands are promoting the gay agenda. Personally, I hope it is two women holding hands. I would be fine with it being two men holding hands. I would be happy if it was just the one person with two different sleeves holding their own hands, because I don’t give a shit, because I understand there’s real things to worry about in this country, besides what’s on a stupid coffee cup.

Yet, Republicans seem to be so brain-dead, that they want to get up in arms about everything. So what’s next? Are we going to see videos of them going outside, buying Starbucks, and then smashing it with a hammer, like they did their Keurigs last week? Or are they going to man up, and say, “You know what? I don’t give a shit what’s on my coffee cup. I just like coffee. I just want to have a hot beverage. I just want to go about my day without being triggered by two anonymous hands on a coffee cup.”.

But they won’t do that. They won’t let it go. They want to look for anything they can to bitch and whine about, because that’s what they do. That’s how they get their base riled up. That’s why Fox News reported on this story, and they actually didn’t necessarily take a single side in it. They just kind of reported on it as if it was some kind of water pollution going on, and they wanted to do some hard-hitting, honest, independent journalism here.

Fox News is absolutely going to continue to push this cup conspiracy about the gay agenda, because they have nothing else they can talk about. They don’t want to focus on the real issues, like Americans getting screwed with the Republican tax cuts, or the Trump family getting a billion dollars from those tax cuts, or the looming indictments from the Bob Mueller investigation. No.

They’ll talk about the fact that they are perceiving two hands on a coffee cup to belong to a lesbian couple, and therefore, these Starbucks holiday cups are promoting the gay agenda.