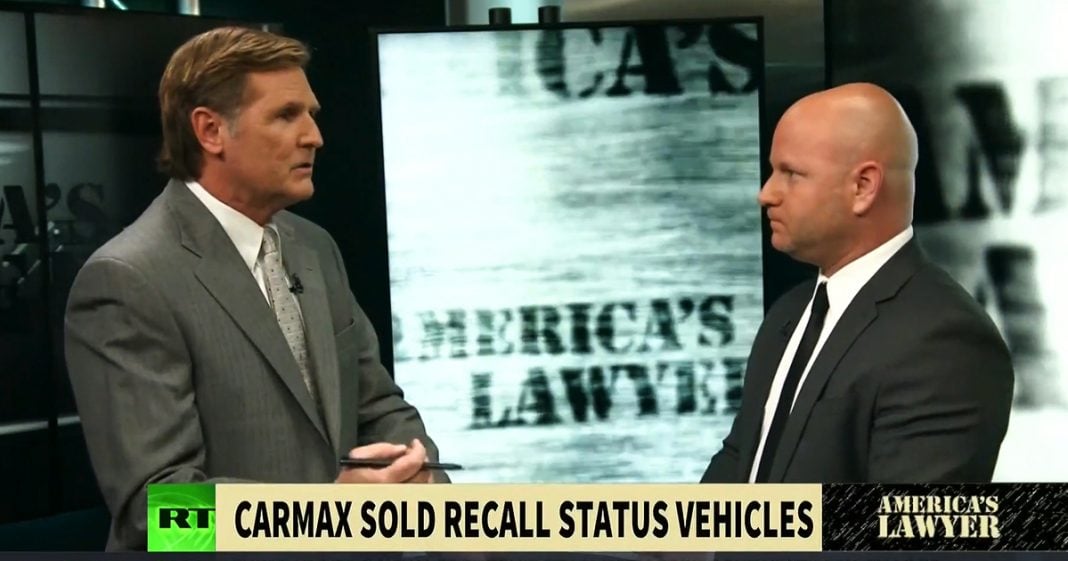 Via America’s Lawyer: Mike Papantonio is joined by Farron Cousins, Executive Editor for The Trial Lawyer Magazine, to talk about why Carmax is selling cars that are under recall status for possibly dangerous defects.

Mike Papantonio: You’re going to love this story. Used cars that are under recall status are being sold without their safety flaws or deadly defects being corrected. Joining me now to talk about this is Executive Editor for Trial Lawyer Magazines, Farron Cousins.

Farron, let me ask you this, you cover all stories. You see every odd iteration of corporate America, trying to pull of a scam. This is a big scam.

Farron Cousins: It really is. CarMax, the company doing this, one of the largest auto resellers in the United States. A recent survey found out that as many as 25% of their vehicles are being sold with existing active recalls on the vehicles. We’ve known this for a long time. A lot of recalls might be minor, but we do have very major, life-threatening recalls out there in the country now. We have the ignition switch recall, Takata airbags, where the airbag is essentially exploding, and shooting shrapnel instead of protecting somebody in the event of an accident.

CarMax knows that these defects are there, knows that they don’t even have to pay to fix them. But they don’t want to take the time, because any time that car’s not sitting on the lot, getting a recall fixed, they can’t sell it that day, and it costs them money, I guess, in the long run.

Mike Papantonio: Of course, it’s sold “as is”. An explosion with the airbags, shrapnel in your head. That’s your responsibility. You bought the car. But truthfully, this is going to end up in some serious lawsuits.

Farron Cousins: It absolutely is. Eric Schneiderman in New York City has already taken on similar cases with auto dealers knowingly selling a vehicle that has an active recall, insisting the vehicle is safe. Because that’s the thing; it’s not just that they’re selling it with the recall, it’s that they know there’s a recall, they’re not telling the consumer about it, the consumer’s not going back and checking, because you assume this dealership has done the due diligence. Because they know. When they get a new car in, they run the VIN. They know what’s out there.

Mike Papantonio: It’s one thing to sell a car that maybe has defective paint, maybe a defective windshield wiper, but when you’re selling a car where you have a defect that can cause death, that’s a little different. The standards are raised a little bit. What surprises me, shouldn’t the FTC step in and do something here?

Farron Cousins: If the government functioned like it was supposed to function in the United States, it absolutely would. But we know for a fact, that regulatory agencies, everything from the FTC to the EPA to the FDA, for decades have been captured by industry. They’re not going to step in and regulate their buddies. They’re going to do what they have to, to make sure that their buddies are taken care of. That their bottom lines aren’t affected, so we change the rules. We don’t enforce certain rules, and that’s why we end up in situations like this, where a massive corporation can get away with just selling you a vehicle that may, or may not, kill you. They know it, but they won’t tell you.

Mike Papantonio: Well here’s the issue; I think the case is going to turn on this. The case is going say, ‘Look, we sold this ‘”as is”.’ But to sell “as is” with a hidden safety issue, a danger, a hidden danger that could result in your death … Maybe the car burns up. Maybe an electrical fire takes place. Maybe that shrapnel problem that they’re having with the Takata airbags becomes an issue. For a used care dealer to say, ‘We’re on good ground. I’m not worried about this.’, buddy you better take a reality check. I’m calling this. You’re going to see some cases come out of this, where somebody’s killed because of one of these latent defects, where there’s been a recall. There’s going to be a big problem there.

As someone watching this program, what should they know about CarMax before they go buying a car there?

Farron Cousins: Well, first and foremost, any time you go to buy a vehicle, do not …. I don’t want to say, ‘Don’t trust the dealership.’, but you got to do your own research. Get the VIN number. They’re all available online. The NHTSA government website, look for recalls, look for defects. Get the VIN and do your research.