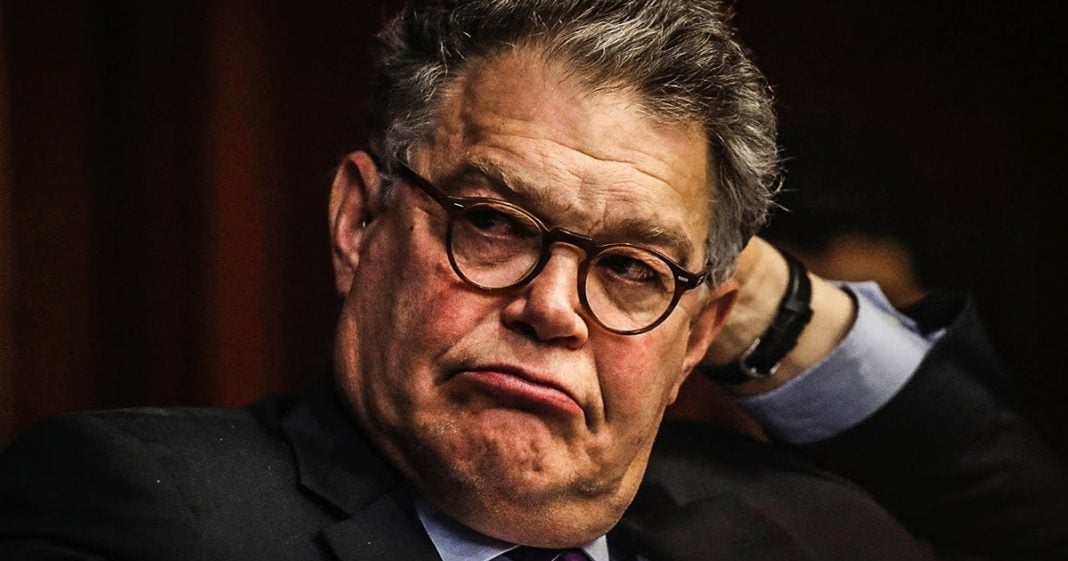 Democratic Senator Al Franken found himself in a self-made disaster when an LA newscaster named Leeann Tweeden came forward this week with allegations that Al Franken forcibly kissed and groped her without her consent during a USO tour in 2006. A picture that accompanied the story seemed to confirm that Franken was acting incredibly inappropriately while the woman was sleeping. Franken has apologized, but that won’t cut it in this instance, as Ring of Fire’s Farron Cousins explains.

On Thursday of this week, Democratic Senator Al Franken was accused by a woman named Leeann Tweeden of forcibly groping and kissing her during a 2006 USO Tour that both she and Franken were on. According to the woman, as part of a skit, Al Franken was supposed to kiss her and he decided to do it very, essentially, without her consent. She did not want to do it, but in rehearsals he kind of forced himself upon her, according to her account. Then, the icing on the cake here, was the picture that was released, showing Tweeden sleeping and Al Franken looks he’s pretending to be groping her while she’s asleep.

This behavior is completely unacceptable. Al Franken, to his credit, has come out and apologized for this incident, said he remembers it a little differently, and then he said there’s no excuse for the photo. Tweeden did accept his apology. Unfortunately, an apology at this point from Al Franken is not good enough. He has to go.

I know a lot of Democrats out there are saying, no, Al Franken shouldn’t resign, we need that senate seat. You know what? There are some things in the world more important than a Senate seat, like respecting women, respecting their boundaries, respecting their consent. That’s what this is about. It might have been just a bad joke on Franken’s behalf, but he’s got to go. You have to hold these people accountable because, if you don’t, their behavior is going to continue to go unchecked and it’s going to send a message to everybody else that you can do these kinds of things and get away with it, there are no consequences if you’re powerful or famous enough. Al Franken has to go.

Furthermore, we’ve also found out this week that in the last ten years, $17 million has been paid out to staffers in Washington, D.C. who have been harassed or inappropriately touched by members of Congress. Seventeen million dollars in ten years paid out to these people.

In response to the Franken allegations that came up, Donald Trump decided to go after Al Franken, let the world know that he doesn’t appreciate Franken’s behavior here, while remaining completely silent about Roy Moore, the guy who now has, I don’t know, five, seven, nine women accusing him of inappropriate behavior while they were in their teens. Listen, if we’re going to be outraged over Roy Moore, then we also have to be outraged over Al Franken and, Donald Trump, to be honest.

You cannot have selective outrage. Sexual harassment, sexual assault, does not know a single political party, and that is what we have to move past. This isn’t about parties, this isn’t about Senate seats, this isn’t about elections, this is about treating women with the dignity and respect that they deserve. These powerful men have been basically able to get off the hook for far too long. There have to be consequences and, in this case, the Democratic Party can send a very clear message by telling Franken that it’s time for him to go. Yeah, we might lose a Senate seat, but isn’t self-respect, isn’t respecting women more important than that? I would like to think that it is.