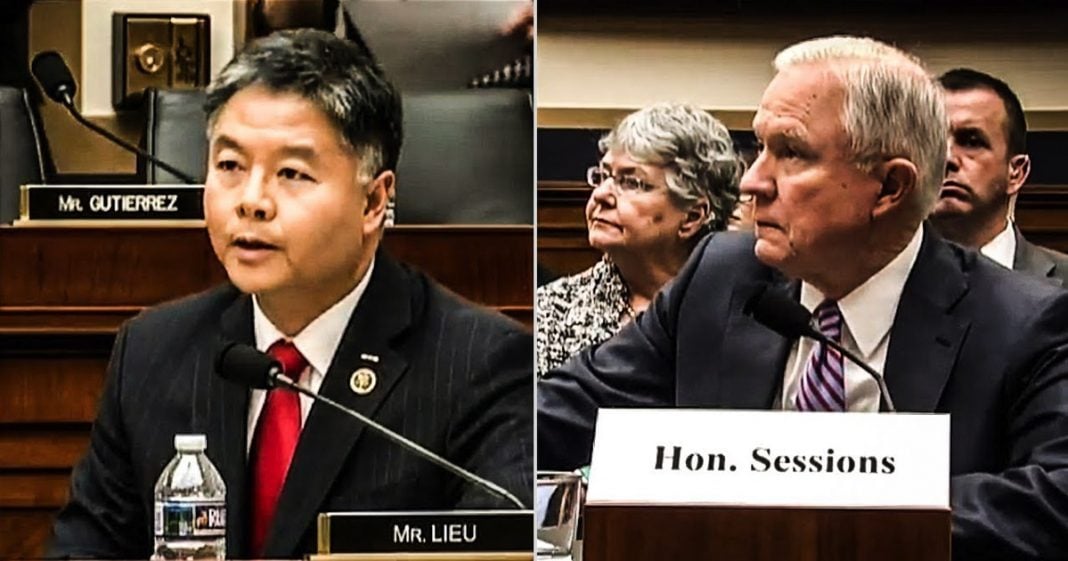 Democratic Representative Ted Lieu absolutely destroyed Attorney General Jeff Sessions during a hearing in the House of Representatives on Tuesday, and pretty clearly made a case for prosecuting Jeff Sessions for perjury. Lieu pointed out the fact that Sessions’ testimony was contradicting what he had said on his security clearance form, indicating that he either lied this week or he lied on his form. Ring of Fire’s Farron Cousins discusses this.

On Tuesday, Attorney General Jeff Sessions was called in front of the House Judiciary Committee for reasons that, to be quite honest, are a little unclear. They said the meeting, or the questioning, the hearing, whatever it is going to be, is going to be more about oversight of the Department of Justice. However, Republicans only used the opportunity to goad Jeff Sessions into launching an investigation into Hillary Clinton and Bill Clinton and Uranium One and Barack Obama and, basically, any Democrat who they’ve ever seen in their lives. They were trying to push Jeff Sessions during this hearing to launch investigations into them.

Jeff Sessions, to his credit, said “looks like” is not grounds for a full-blown investigation, even though he had hinted the day before that he wanted to launch an investigation. That’s neither here nor there. The big takeaway from Tuesday’s hearing with Jeff Sessions happened when Democratic Representative Ted Lieu decided to ask Jeff Sessions exactly how he was lying and, to be honest, when he was lying. Take a look.

Ted Lieu: As Attorney General, you have security clearance, correct?

Ted Lieu: I submitted such a form when I served in active duty in the U.S. Air Force, and the form requires you to certify under penalty of perjury that information submitted was true, complete and correct to the best of your knowledge. You certified your security clearance form, correct?

Jeff Sessions: That is correct.

Ted Lieu: I’m going to, on the video screen, show you a question from that form, and it says, “Have you or any of your immediate family in the past seven years had any contact with a foreign government, its establishment, such as embassy, consulate, agency, military service, intelligence or security service, etc., or its representatives, whether inside or outside the U.S.?”

The answer that you gave was “No.” What you just told us under oath was exactly the opposite. I’m going to ask you, Mr. Sessions, were you lying then when you filled out the form, or are you lying now?

Jeff Sessions: What I was told by my executive assistant when we did this form earlier, and then again when I was nominated for Attorney General, that the FBI authority says members of Congress and effectively government officials, meeting people on an official basis, you were not required to list all these contacts.

Ted Lieu: Nothing in that question says you get to answer any differently because you are a U.S. Senator rather than, say, a young police officer. Isn’t that right?

Ted Lieu: Nothing in that question authorizes you to answer any differently, isn’t that right?

Jeff Sessions: I would say that-

I didn’t go to law school. I know a lot about the law, I work with a lot of lawyers. What I will say is that it kind of seems like Representative Lieu just laid out the case for perjury charges to be brought against Jeff Sessions. It’s pretty black and white right there on the screen. He either lied then, or he is lying now.

We know that back when he had to testify in front of the Senate, Jeff Sessions had said, “I had no contact with the Russians.” As it turns out, he had two contacts at least with Sergey Kislyak that he, oops, didn’t recall at the time. Then later on, he said, no, nobody in the campaign had any kind of contact with anybody other than those things, and it turns out that was a lie, because he was in that meeting with Papadopoulos, where Papadopoulos said, “Hey, I’ve got Russians that want to meet with us.” Jeff Sessions said, nah, it’s probably a bad idea. He didn’t disclose that, either.

My guess is that, yeah, Jeff Sessions lied in that previous one and, to be honest, he’s probably also lying in the Tuesday hearing. During the entire year, Jeff Sessions kept repeating the lines, “I do not recall. I can’t recall. I don’t recollect. I don’t remember.” That kind of seems like what somebody who’s trying to cover up something would continue to say, which is exactly the case of Jeff Sessions at this point. Why some kind of investigation into Jeff Sessions hasn’t begun is absolutely beyond me.

It also helps to explain why the Republicans in that hearing were so hell-bent on getting Jeff Sessions to launch an investigation into Democrats. They’ll try anything at this point to pull away from the fact that, one, their President is under investigation and, number two, the Department of Justice had, Attorney General Jeff Sessions, has clearly lied under oath, he’s lied on his forms and he’s lying to the American public at every possible chance he can get when he’s under oath. Those sound like crimes worthy of investigation.