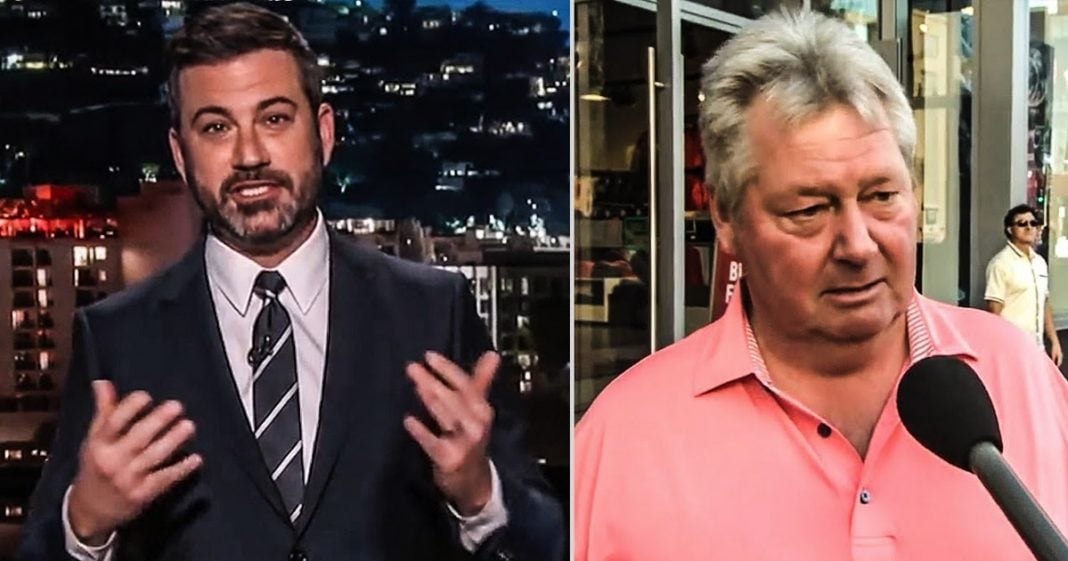 Late night talk show host Jimmy Kimmel has once again shown how ignorant conservatives in this country can be by asking people on the street if Hillary Clinton should be impeached. The responses were overwhelmingly “yes”, though most struggled to name any crimes for which she should be removed from an office that she doesn’t currently hold. Ring of Fire’s Farron Cousins discusses this.

For quite some time now, Republicans have been trying to make the Uranium One scandal into an actual thing. Unfortunately, anybody who’s actually looked at it and read the details about it, you can pretty much go ahead and figure out that there’s really no scandal here whatsoever. But that hasn’t stopped Republicans from asking Jeff Sessions to investigate it. Trump’s asking people to investigate it, and even regular Conservatives on the street are wanting Hillary Clinton to pay a price for this Uranium One deal.

Jimmy Kimmel, on Jimmy Kimmel Live, Tuesday night, decided to go ahead and exploit the ignorance of American voters not only on this issue, but on Hillary Clinton in general. Take a look.

Reporter: Do you think Hillary Clinton should be impeached?

Citizen 1: Yes. Definitely, for what she’s done, the way that she’s, more or less, with the Russian deal and all that stuff going on, she definitely should be out.

Reporter: Do you think Hillary Clinton should be impeached?

Reporter: For what crimes?

Citizen 2: Really, I’m not a political person at all, so I really have no clue-

Reporter: Would you support Congress in impeaching Hillary Clinton?

Now that was just a sampling of some of the responses given to Kimmel’s reporter there on the street, but people want her impeached from a job that she doesn’t have for a scandal that doesn’t exist. Most of the people interviewed, when asked why they believed Hillary Clinton should be impeached, could not give a straightforward answer. Some of them just said, “For lying to the American public.” Well, hell, if that was an impeachable offense, we’d only have three people sitting in Washington, D.C. right now. Maybe that’s even being a little generous.

But the bottom line is that there is a deep-seated hatred for Hillary Clinton that runs through the right, and to be honest, parts of the left at this point. The big question, seriously, is why? Why is anyone in this country obsessed with Hillary Clinton? Move on. Forget about her. Let it go. She didn’t do anything that was illegal. We’ve had enough investigations into her entire life to go ahead and say that. So, just let her go. You don’t need to investigate her. You don’t need to push her to run again. You just need to let her go live the rest of her life in peace, as a private citizen of the United States. That’s what we need right now.

But these Conservatives want to make it all about Hillary Clinton because they don’t have another bogeyman to run against in 2020, or in 2018. She is their sacred bogeyman at this point. They love to attack her because they know that a lot of the public doesn’t like her, so they’re going to keep at it. They’re going to waste even more tax dollars, most likely, investigating this Uranium One deal, which is absolutely stupid.

Jimmy Kimmel did a great job of highlighting just the general ignorance of Trump supporters, Trump voters, and Conservatives in general during that segment. If you get the time, go watch the full thing. It’s quite remarkable. But the bottom line is that Trump voters are so ignorant that they want to impeach Hillary Clinton from a job that she doesn’t even have.