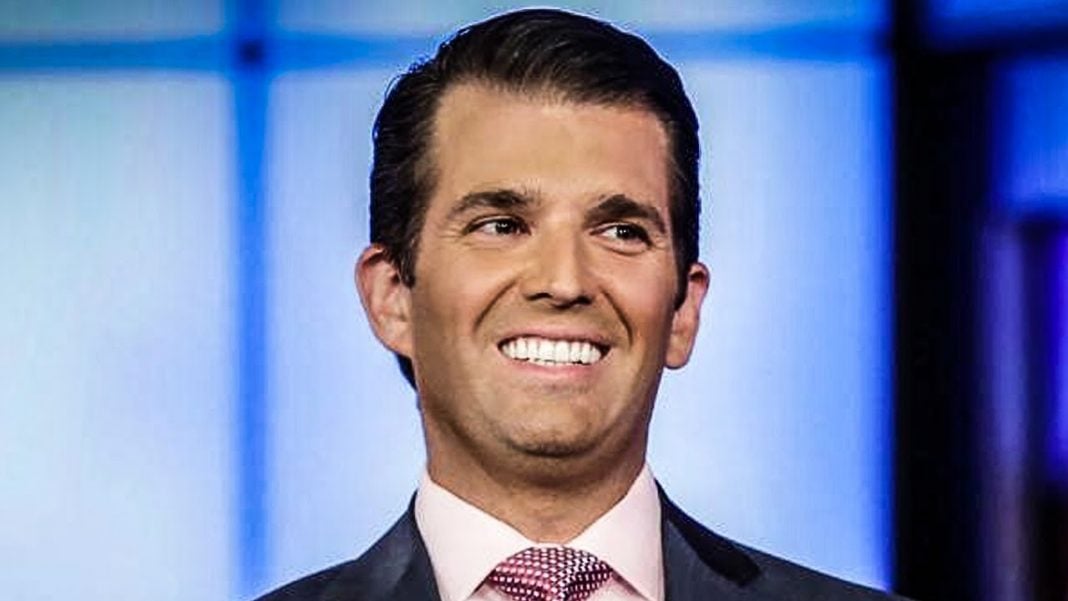 According to a blockbuster story in The Atlantic, Wikileaks was attempting to feed information to Donald Trump, Jr. during the presidential campaign about Hillary Clinton and the hacked DNC emails. While it does appear that Trump Jr. did heed some of the advice from Wikileaks, it remains unclear as to whether or not he actively worked with them. Ring of Fire’s Farron Cousins discusses this.

On Monday evening, a report in The Atlantic broke a story saying that Donald Trump Jr. had been DMing with Wikileaks on Twitter during the 2016 presidential campaign. Now, according to this story, according to DMs actually released by Trump Jr. on Twitter — I’m sure his lawyer was probably not very happy about him doing that — but Wikileaks was contacting Trump Jr. telling him that, “Look, we’ve got these Podesta emails from the DNC. We’re going to release them. It would be super great if you could get your dad to tweet about them,” to which Trump Jr. replied, “Already did,” acting like it wasn’t because of Wikileaks. However, Donald Trump tweeted out about the Podesta emails 15 minutes after Wikileaks DMed Donald Trump Jr.

Now, late in the evening, Julian Assange took to Twitter to try to address this story, where he neither really confirmed or denied it, but he did say something that was incredibly stupid and completely unbelievable. He said that we don’t know for sure what happened because we, the big hacker organization, the group that takes other people’s documents and digital documents and releases them, they don’t keep records of their communications. Let that sink in for a little bit. If Julian Assange is supposed to be some kind of master hacker or document getter but he doesn’t keep any records of his own stuff, he doesn’t know what his own staff is doing, that seems a little, I don’t know, stupid. And, again, completely not believable whatsoever.

It’s also worth mentioning that Julian Assange is hiding out right now because he’s been accused of sexual assault. But that’s neither here nor there. Technically, I guess at the moment what Donald Trump Jr. did wasn’t illegal. So far, we don’t really know the extent to which he was working with or collaborating with Wikileaks. But we do know that he has lied about having this contact with them on multiple occasions, including an appearance on Sean Hannity earlier this summer. Right after Trump Jr. released the emails about the meeting with the Russians, Sean Hannity asked him, “This was the only contact with anybody you ever had about anything regarding Clinton?” and Trump Jr. said, “Yes, absolutely.” I guess he forgot about all of those DMs from Wikileaks.

It also raises questions about what in the hell Wikileaks is even trying to do at this point. They’re clearly in the tank for Donald Trump, and I don’t think it’s because they like Trump. I think it’s because for some reason they have such a hatred of Hillary Clinton that they were willing to work with the devil himself in order to bring her down for some, I don’t know, unknown slight that I guess she committed against Julian Assange and Wikileaks. It’s absolutely ridiculous. It also shows us that the Trump administration, the Trump campaign was so stupid and desperate to win the presidency that they were willing to work with anybody they could get their hands on: Wikileaks, the Russians, and who the hell else may have appeared throughout time. We don’t even know at this point. They were willing to work with anybody just to win the office of the presidency.

Again, we’ve entered a whole new realm of stupidity here in the United States with the Trump administration and with Wikileaks and with Russia and with all of the other BS nonsense happening throughout the country right now. But, again, at the end of the day, it all comes back to the Trump administration. Everything is on them, and Trump Jr. always seems to be right at the heart of all of the stupid decisions and stupid little alliances that the Trump campaign attempted to make. I don’t think that it’s going to be long before Bob Mueller, the special prosecutor, starts to hand out a few more indictments, and I wouldn’t be surprised to see Donald Trump Jr.’s name sitting at the top of one of those documents.