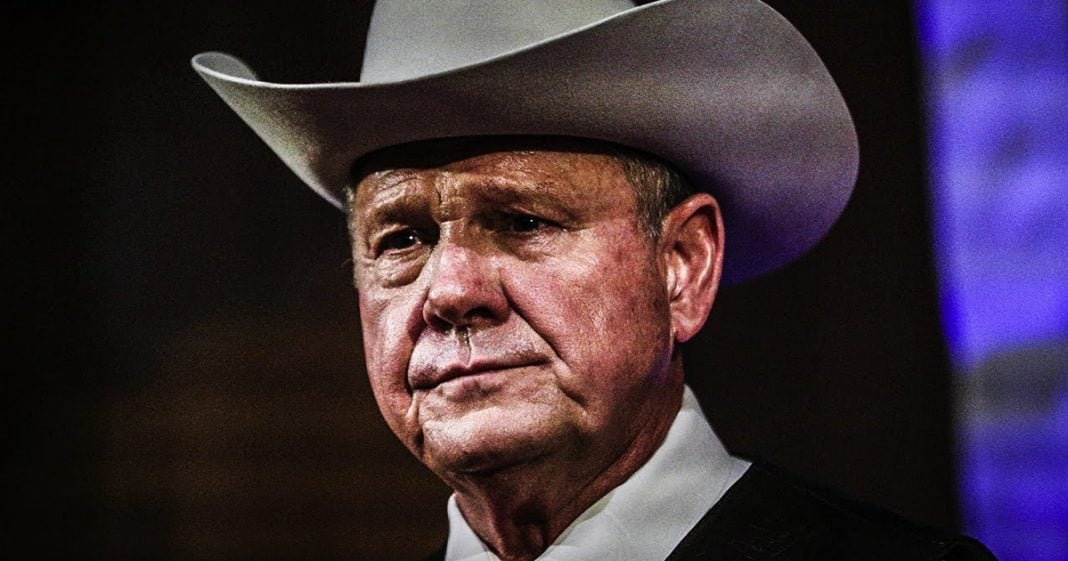 Republican Alabama Senate candidate Roy Moore now has 5 women accusing him of inappropriate sexual advances, with one woman going as far as to say that Moore attempted to rape her many years ago. Now news has emerged saying that Moore was banned from an Alabama mall in the 1980’s for trying to get dates with teenagers – when he was in his 30’s. Ring of Fire’s Farron Cousins discusses this.

Monday was a very bad day for Alabama Senate candidate Roy Moore. You see now a total of five women have come forward accusing Roy Moore of sexual improprieties. One women has essentially accused Moore of attempting to rape her when she was teenager, when Moore was in his 30’s.

And now even later in the day on Monday, a story came out saying that Roy Moore in the 1980’s, was actually banned from the Gadsden Mall in the City of Gadsden, Alabama because he would go to the mall on the weekends and hang out like a teenager, even though again he was in his 30’s, and he would proposition young female teenagers at the mall.

The problem became so intense that they banned him from going to the mall. And this man then later went on to become the Chief Justice of the Alabama Supreme Court, was embroiled with scandals involving the 10 Commandments and his want-to-be religious rule in the state of Alabama for years, and now that he’s running for Senate finally these accusations are coming out.

However, and I know this … I’m not trying to attack any of the victims here whatsoever, we could have ended this mans career a long time ago if we had had the culture back then that we currently have today, that’s erupted since Harvey Weinstein, that would have allowed these women to come forward and tell their stories and put an end to Moore’s predatory behavior and his dictatorial rule back then.

Unfortunately, it took this long for us to get to a point where we actually start to believe women when they say that men sexually assaulted them or sexually harassed them, which explains why these women did not come forward sooner.

Nonetheless, the fact that a person who is running for a Senate seat, to serve in the US Senate as a republican, was banned from a mall in the 80’s because of inappropriate behavior. Why is it that that mall has higher standards than the republican party of the United States? That’s what’s at issue here. Not just that Moore did this, and probably should be criminally prosecuted for it, but the fact that a mall in the town of Gadsden, Alabama has more scruples than the entire republican party.

There are still republicans out there today, including Mo Brooks from Alabama, who believe that Roy Moore should not step down. That he should continue running for Senate. There’s been a few that have spoken out and said he should drop out, or that if he wins we should go ahead and kick him out anyway, but that’s beside the point. They need to put an end to it now. They have the power to put an end to it now. They just don’t have the courage to do it.

They’re going to let somebody, who is by all accounts at this point pretty much guilty of pedophilia, run as their candidate, become the face of their party, get all of this massive attention to the republicans for all the wrong reasons. They’re going to continue to let him run for office because nobody in that party has enough courage to step forward and say, “You know what Roy Moore? It’s time for you to go.”