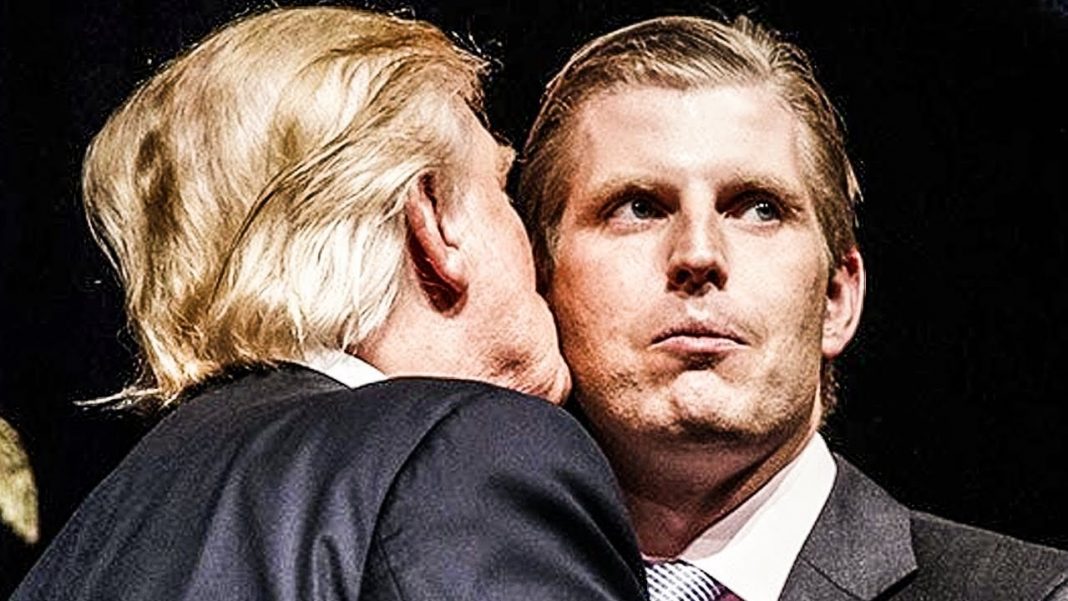 Donald Trump, Jr. has taken the brunt of most of the coverage of the Trump campaign’s potential collusion with foreign powers, but now it looks like it might be little brother Eric’s turn to get grilled. A member of the House Intelligence Committee says that Eric will eventually be called to testify before the committee about what he knows and what he may have done. Ring of Fire’s Farron Cousins discusses this.

In addition to special prosecutor Bob Muller looking into potential collusion between the Trump campaign and members of foreign countries, there’s also several different organizations, or I should say, House or Senate panels in D.C. also investigating the matter.

One of those is the House Intelligence Committee. Earlier this week, Democratic Representative Joaquin Castro said that he is ready to call Eric Trump to testify in front of his committee to find out, what in the hell Eric knows about potential collusion between the Trump campaign and Russia.

Now so far up to this point, everything is focused on Donald Trump Jr. and Jared Kushner, who is Trump’s son-in-law. Those seem to be the two guys making all of the stupid, horrible decisions that seem to be tanking the Trump Administration right now.

Trump himself and Steve Bannon, and other members in the White House have directly blamed Kushner for all of the problems. They’ve even gone as far as to blame him, Kushner, for the entire Muller investigation to begin with.

Trump Jr., we found out hours ago, had been DMing with WikiLeaks throughout the campaign, getting dirt. They were telling him things, giving him passwords to secure sites.

But now, Joaquin Castro thinks, you know what, this other Trump boy is being a little too quiet here. He’s not making the headlines. He’s not out on Twitter every day trying to say things, or releasing documents. He seems to have a more level head about him, so maybe we can get a little information out of good old Eric there. See exactly what his brother, his brother-in-law, and what his father were up to during the campaign, and, to be honest, probably see what Eric Trump himself was up to, seeing is how his wife works on Donald Trump’s actual Presidential campaign. She’s currently, right now, raising money for his 2020 Presidential Election bid.

Eric is right in the heart of the Trump Administration, the Trump campaign, and yet he has virtually been unscathed up to this point.

My prediction is that, that is going to change, once he has to go in front of a House Intelligence Committee, and start talking. We do know that he has said himself, during the economic downturn, the recession, that he didn’t use American banks, he used Russian banks. He wanted to get money from overseas instead of working with the guys here.

That could potentially cause some problems for him down the road, if Bob Muller decides to look in that direction. I’m sure we can probably find some shady finance dealings in there, just like we could with Kushner and Trump Jr., and Ivanka herself, based on reports coming out of New York City, from Eric Schneiderman.

I don’t think Eric Trump is clean in all this. I think he’s got plenty of dirt on his hands from all of the dealings within the Trump campaign. I am glad to see people like Joaquin Castro come out and say, “We’re going to ask him the tough questions. We’re going to put him in front of the committee. We’re going to do our best to finally get some clear answers as to who was working with what country and what person within that country, to help get Donald Trump elected.”