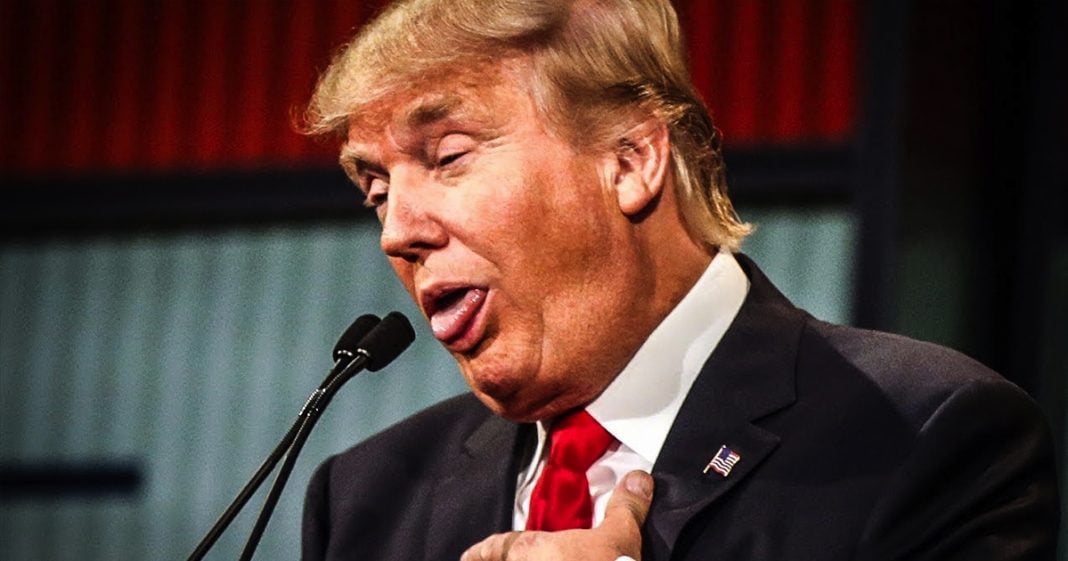 This week, a prominent Wall Street analyst began ringing the alarm bells about Donald Trump’s poor physical health, saying that the man lives on burgers and fries, never exercises, and never eats fruits. These claims have been mostly confirmed by Secret Service agents and reporters, and the questions about whether or not Trump can even make it through 4 years as President are growing louder, as Ring of Fire’s Farron Cousins explains.

We know during the campaign he had that weird looking crackpot come out claiming to be a doctor, saying that Donald Trump was probably the healthiest person he’s ever seen. Well as it turns out he really not. A Wall Street analysis who as a very large Twitter following was recently interviewed. Where he talked about the fact that Donald Trump’s physical health should be a cause of concern, not just for Republicans but for the actual Trump family if they indeed do care about their father’s health.

Here are some of the things that we know about Donald Trump’s health. These have been confirmed by secret service officials speaking with reporters. Trump is at least 50 pounds overweight. He loathes exercises. He uses a golf cart to get around. He actually had trouble walking up a hill with other world leaders at a recent G10 summit. They say that he’s never seen him eat a piece of fruit. He rarely if ever eats vegetables. He loves burgers and fries, specifically McDonald’s and other fast food restaurants. In fact secret service officials have had to go out and pick him up McDonald’s when the White House chef can’t get his burgers right. That’s another story that came out this week. He only sleeps four hours a night, which is bad for any human being.

Here’s why this is actually an issue. I’m not just saying the guy’s a fat slob. Most of the things that I just listed her could probably be applied to myself as well. However I’m not as angry all the time as Donald Trump, believe it or not. That’s where the real problem comes in. When you’re 50 pounds overweight, when you do not exercise, when you’re not getting enough sleep, your body starts to go into kind of panic mode. Then when you add on top of that the fact that you’re angry all the time, which other reports have confirmed, then you’re looking at a real possible situation of either a heart attack, a stroke or both.

Donald Trump has to calm himself down, start eating right. I ate to sound like a high school gym teacher here, but he’s got to take care of his body if he things he’s going to make it four years as president of the United States. We’re less than one year in, and Donald Trump has already shown how irate and unhinged he gets anytime there’s any kind of news that’s not flattering to him. When you couple in the fact that the guy is 50 pounds overweight, he doesn’t exercise, can barely walk up a hill, that is a recipe for disaster for any American citizen, for any human being. It doesn’t have to be an American citizen.

Here’s my advice to Ivanka, Eric, Don Jr, Bannon. I assume you guys probably care about your father, I mean maybe. Bannon probably does because he’s too young to be a greedy piece of crap like the other three. However, if you really cared about him you would probably do something about this. You would probably say, “Hey dad, maybe lay off the McDonald’s a little bit. Let me go make us a fresh kale salad.” But you won’t, because you want that inheritance. As soon as he kicks the bucket from his horrible lifestyle habits, you get even more money. So I don’t think the Trump family’s going to step up and be the ones to tell their dad, “Hey, please start taking care of yourself.”

But we shouldn’t wish ill on anyone. That’s bad form here. But I will say that overall the issue of Donald Trump’s physical health is going to start becoming more and more of an issue for him. Especially if we expect him to keep pace with other world leaders, perhaps like Canada’s Justin Trudeau. Good looking guy, he’s in shape, physically fit. Compare that with what we have in the White House. It’s just another reason to consider Donald Trump one of the biggest embarrassments to the United States that we have today.