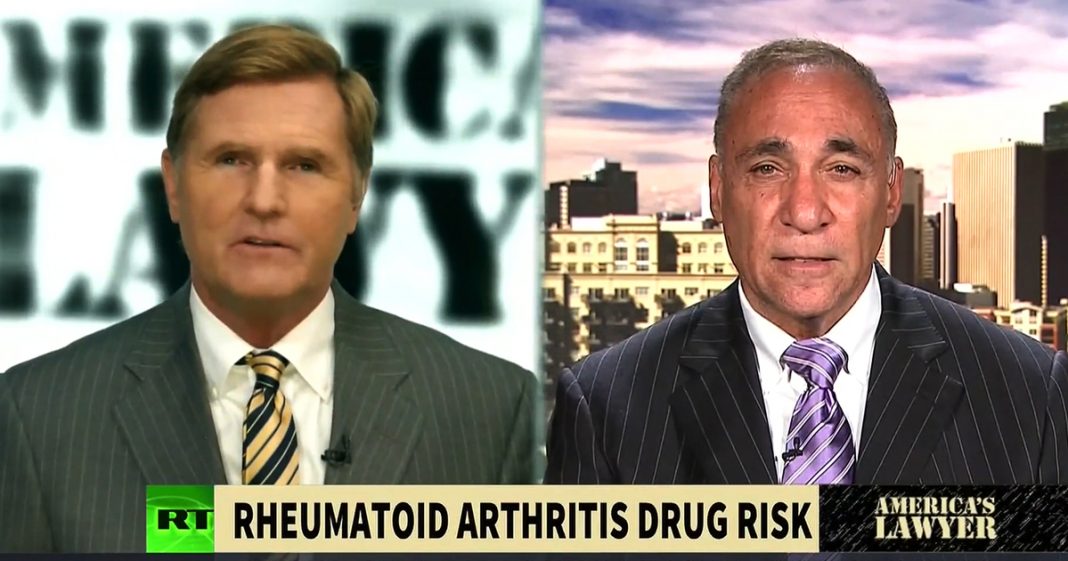 Actemra is an immunosuppressive medication used to treat the symptoms of moderate to severe rheumatoid arthritis. The medication was first approved by the FDA in 2010. The drug has been marketed to doctors as not increasing the risk of heart failure, stroke and lung disease, which competing drug makers admit, rheumatoid arthritis medication usually does. The problem is that Actemra absolutely does carry this risk, and the manufacturer seriously misled the FDA and doctors in order to sell its drug.

According to the medical journalism organization STAT, patients taking Actemra are 50% more likely to suffer a heart attack or stroke than patients using Enbrel, a competing drug. In fact, STAT analyzed more than half a million reports of adverse events during treatment with rheumatoid arthritis drugs, and found evidence that the risks of heart attacks, strokes, heart failure, and other conditions were as high – or even higher – for patients treated with Actemra than they were for patients treated with competing drugs. In other words, they out-in-out lied to the FDA and medical doctors about Actemra dangers.

The failure of Actemra to carry a proper warning has led doctors to overly prescribe this medication to individuals who are susceptible to heart and lung injuries, and has led doctors to fail to monitor these patients more closely for potential harm.

Drug makers Roche and Genentech, the manufacturers of Actemra, are now facing thousands of potential lawsuits. Plaintiff attorneys claims that Roche and Genentech failed to properly test Actemra before placing it on the market; They failed to warn doctors and patients that the medication was just as likely to cause serious injuries as competing drugs; They concealed evidence of the dangers of the drug from the government and public; And the drug makers misrepresented the safety of the medication in its marketing material and publications. Pretty much a grand slam of fraud.

Patients have a right to be able to make informed choices about what medications they take. But when you have drug companies that hide the real dangers of their drugs from doctors, it becomes impossible for consumers to make an informed choice. And make no mistake – that is exactly what Big Pharma wants, because the second people start questioning the safety of a drug, the profits for those big drug companies begin to fall.

Joining me to talk about this is attorney and doctor, John Restaino. John, let’s start by talking about the condition itself, rheumatoid arthritis. This disease affects millions of people across the planet, yet it still has a bit of mystery as to how and when it’s gonna strike somebody that you might know. Is that kind of a quick take on it?

John Restaino: It is in fact. It does affect predominantly women. It’s been estimated that approximately 1% to 3% of women in the United States are affected with this disease. As has been mentioned, there’s no known cause. It’s in the class of rheumatic diseases and it’s a form of autoimmune disease, meaning it’s where the immune system of the body actually turns on the body itself, instead of attacking bacteria or virus or exogenous agents. It actually attacks the tissue within the joints of the body itself.

Mike Papantonio: Well there’s some good medications out there, but part of big pharma right now, it seems like they’re trying to capitalize on a problem. And really, they’re doing it with a drug like Actemra. The only way I can look at these facts is to say they … You’ve got a company that’s totally misrepresented the truth about the drug that they were selling to millions of people all over the globe. What’s your take?

John Restaino: Well, that’s apparently so. The evidence is coming out now to showing that the risks of these very serious adverse events associated with the drug is at least equal to other members of the class of drugs that are used, the DMARDS, or Disease Modifying Anti Rheumatic Drugs. The other members of the class are recognized as carrying specific risks, including cardiovascular events, such as heart attack and stroke, and a form of heart failure. Included in that is a very serious condition that affects the pancreas, inflammation of the pancreas, or pancreatitis. What has been analyzed now are the reports to the FDA’s adverse event database. The reports being sent in by physicians and patients are showing that these serious adverse events with these other drugs are also being seen with this drug, and even at higher levels.

Mike Papantonio: John, how does a company just get away with lying about its clinicals? I mean, that’s what happened here. We had a company that said, ‘Look, we’re different. We know that rheumatoid arthritis treatments carry risks, but we’re different because ours doesn’t.’ How does a company just get away with that? In the case of Actemra, the company seemed to downplay the risk. They did that, but they also told physicians that the risks were decreased with Actemra. Isn’t that what they represented to the American public?

John Restaino: Exactly. Looking at their clinical trials, which were relatively short in duration, so if we’re going to start getting adverse events with a particular drug, then you want to be able to see drugs that are powered enough to find these. Meaning, there are enough people in this study and that the studies are conducted for a long enough period of time. First of all, it’s important to recognize that rheumatoid arthritis carries with it an inherent increased risk of cardiovascular events. Now, the manufacturer may say, ‘Aha.’ In this particular case, an individual with a heart attack of a stroke, it might be due to the rheumatoid arthritis, but when they’re taking a medication that increases that risk, that’s putting that person at, obviously, an even higher risk of it.

Mike Papantonio: John, I don’t want to get too much in the weeds here. Let me stick to what people need to know. And that is the FDA-

Mike Papantonio: The FDA hears this message from the manufacturer. That is that gee whiz everything’s okay. Now the FDA knows that they weren’t told the truth. What does the FDA do now to correct the problem? Is there any kind of publication campaign? Are they getting the television? Are they trying to correct this big lie that’s out there? What’s happening?

John Restaino: Well, there’s not much happening. The FDA has required the manufacturer to conduct post marketing approval studies, meaning phase four studies. But that’s something that many times is not done and can take many years to conduct. In the meantime, there has not been a safety alert sent out to physicians. They’re not being told to evaluate the patients for any of the signs and symptoms of these cardiovascular events that we’re seeing with the other drugs. The FDA, once again, is falling down on the job.

John Restaino: They have many things available to them. As you just mentioned, the public service campaign can be important. Every patient has a right to know of the serious effects associated with the drugs that they’re taking. These adverse events that are being recognized with Actemra are inherent in the entire class and the other drugs are warning of. The FDA should be sending, as we mentioned, a safety alert to the doctors, so when doctors are putting the patients on this drug, they’re now monitoring them for the early signs and symptoms of cardiovascular disease, interstitial lung disease and pancreatitis. All of which have been found to be increased when taking this drug.

Mike Papantonio: Okay, now. Look, you’re sitting here both as a medical doctor and as an attorney. Wearing both of those hats, what is happening with the drug industry in general to where we, it’s almost weekly, where we do a story just like this to where we find out they just haven’t told the truth? A drug manufacturer has again lied to consumers. Consumers have died because the company has lied. FDA has dropped the ball because the company has lied. What is this trend that we’re seeing? In about 30 seconds or so, what’s your take on this trend?

John Restaino: Big pharma is going to continue to do this because of the monetary advantages for as long as they can. We can go back to Vioxx. I the clinical trials of Vioxx, they knew there was an increased risk of cardiovascular disease. They hid it from the FDA until it came out in the public as more and more people took these drugs. It’s exactly what we’re seeing with Actemra right now. The reports to the FDA itself is showing a markedly increased risk.

Mike Papantonio: Yeah. It seems to be what we have to live with. I tell everybody, unless a drug has been on the market for more than 10 years, why would you take a risk with a drug? John, thanks for joining me.